I woke up at 5 am to the sounds of Jim and Tami rustling in their tents getting ready for the day. So I decided to join in with the noise making. Justice likes to sleep in and get going by 7:30 so he didn’t get to sleep in uninterrupted.  We got going by 5:30 and said bye to Justice. 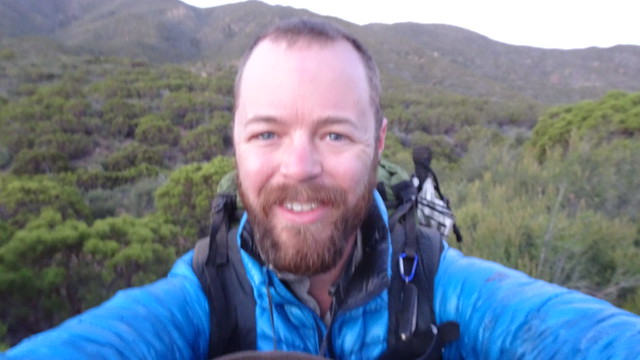 The first part of the morning was fairly standard. Desert hills with lots of uphill climbs. I hiked with Tami for the first couple hours until my knee started bothering me on a steep downhill stretch. She was keeping pace right behind me so I let her pass and told her I was going to slow down. She took off and I didn’t see her for a couple hours. By about 9:30 I was feeling very lethargic. I only had to do 20 miles today but it seemed to be dragging even though I was making good time. I passed Tami sitting on a rock in a dry creek bed eating some food. Not wanting to lose my momentum I kept going and just said hey. For the next couple hours it was almost 2,000 feet of elevation gain in a 5ish miles. The sun was out and there was just enough wind where I couldn’t use my umbrella, which is struggling to stay open now with just a small amount of wind. Two of the spindles snapped off from the connector at the top during a particular sudden gust a few days ago. 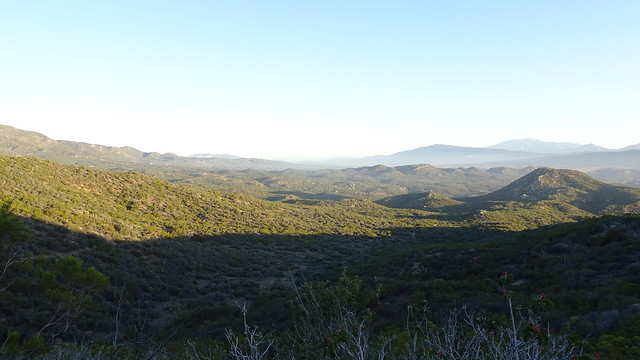 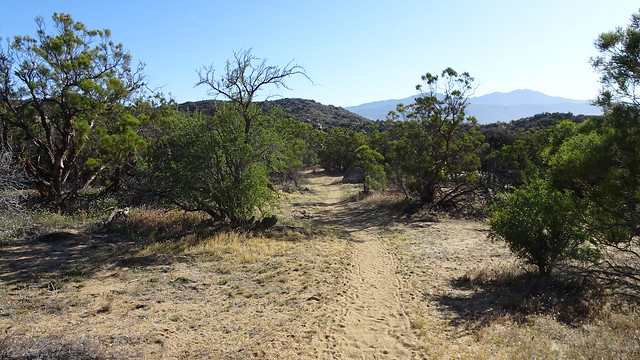 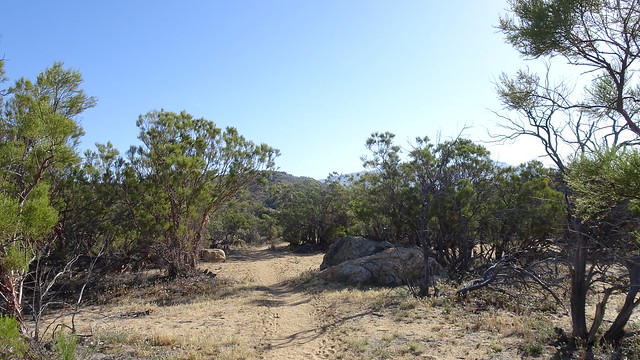 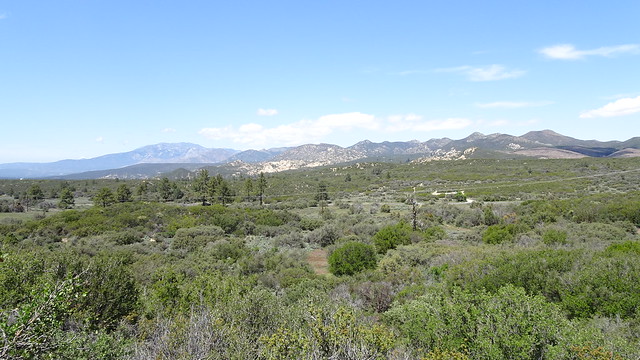 For the next couple hours I felt I was running at half speed. Going up hill was exhausting, the sun seemed to be sapping my strength even though it was in the mid to high 70s. I have been listening to an audio book and even that wasn’t helping with making time go by faster. It’s strange, yesterday walking in the wet cloud seemed to go by quick but today was just something else. I started to become mentally exhausted and having negative thoughts about what I was doing. It just wasn’t a stellar day but I didn’t expect every day to be amazing.

At 10:45 I had to stop so I could dig a cathole and pop a squat. So I dropped my pack, grabbed my Deuce of Spades, and ran up a bit above the trail behind some trees and bushes to do my business. I saw Tami walk by and was hoping she wouldn’t stop and look around when she saw my pack but she must have known what I was up to since she never broke stride. I scrambled back down, hoisted my pack and continued on.

At 11 I came across Tami sitting on a rock and she had her shoes off and was wearing flip flops. I commented on how sluggish I was feeling and she said she was too and that she was eating ibuprofen like candy. Her feet hurt and just walking was exhausting. I felt a little better knowing I wasn’t the only one feeling crappy.

I pressed on heaving my lead weighted feeling legs up this mountain. Eventually I made my way around the mountain and started seeing buildings on these hills. As I got closer I noticed there were a bunch of hills with flat tops in this valley and they all looked similar. An old motor home or fifth wheel trailer, water tank and a huge windowless structure or a greenhouse. Ok…

A mile or so later I come across a note on the ground that said “water cache 400 yards ahead, if empty there is  a second cache in 2 miles at 145.4. ‘Local’ farmers are pot growers. They are not hiker friendly.” Well that explains it. I didn’t take any pictures cause it was a little sketchy and who knows if the are legal growers. Don’t want to get shot. 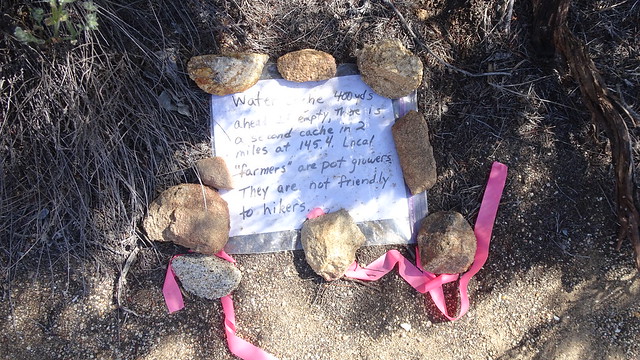 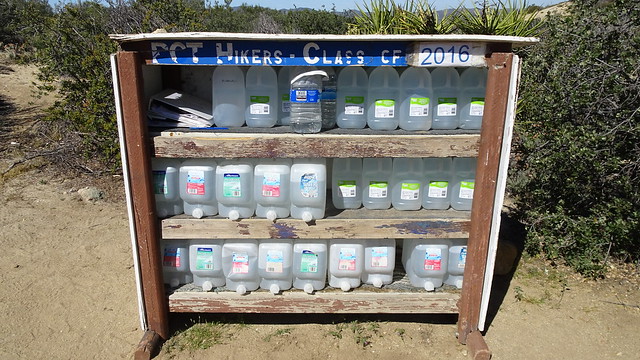 I kept on pushing but I was probably at 1/3rd of normal speed. I felt like I would never finish the last 4 miles. I was hot, sweaty, and worried about water even though I had 1.5 liters still. Finally, I came across a corner and saw highway 74 which is my almost stopping point. The trail crosses the road and then it’s a long climb up to Idyllwild. Right at the side of the road I saw a white car. A car right on the side of the road and right by the trail? That has to be trail magic! I slowly made my way down and saw a man in a chair sitting next to a cooler. He introduced himself as Heinz and offered me a cold drink. I opened up the cooler and grabbed a coke. I don’t normally drink soda but it tasted amazing. Everything tastes amazing so I can’t be trusted on what is actually good anymore. 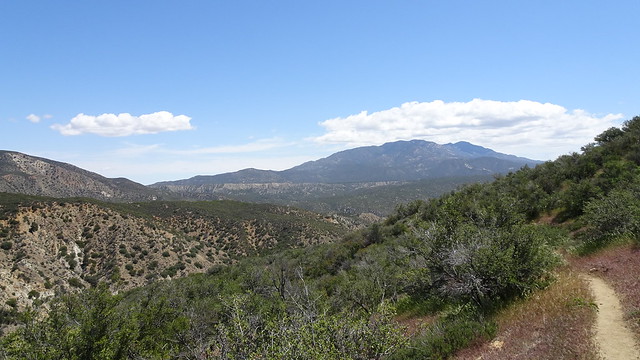 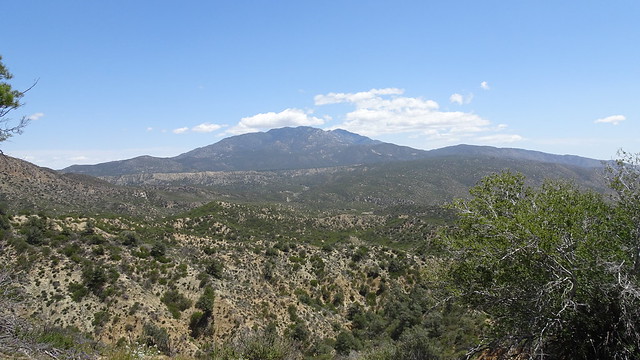 I sat on the cooler talking to Heinz and he told me I was number 21 today. He also had a clipboard for the different alternatives for the next 20ish miles. Unfortunately, back in 2013 there was a fire and so about 10 or 15 miles of the PCT are closed. A lot of people just hitchhike to Idyllwild or do one of the different alternate routes. All of the routes involve some road walking though. I want to say I hiked to Canada so there will be no skipping a head. I want a continuous footpath even if it’s not on the PCT.

My goal for the day was to get to highway 74 and then walk a mile down the road to Paradise Valley cafe. Which word has it is the best burger on the trail. Heinz offered me a ride but I declined and told him I want to walk to Canada. He understood and wished me luck.

I started walking down the side of the road against traffic when all of a sudden 4 McLaren P1 supercars were flying towards me. My jaw dropped. I’ve only seen one other and that was in Vegas on the strip. Then a Lamborghini Aventador, a Ferrari, Porsche 911 Turbo, and 2 more McLarens. Crazy! Must be a fun road like in the Hollywood hills.

I pass a few hikers and one asked if I was headed to paradise. I said yeah and he told me it was closed. He told me he was just kidding before too much emotional damage could occur.

I made it to the restaurant and was walking up when I see Tami getting out of a van. She apparently hitched with some day hikers. We dropped our packs against the patio wall took off out shoes and put on our sandals.  Best feeling in the world. 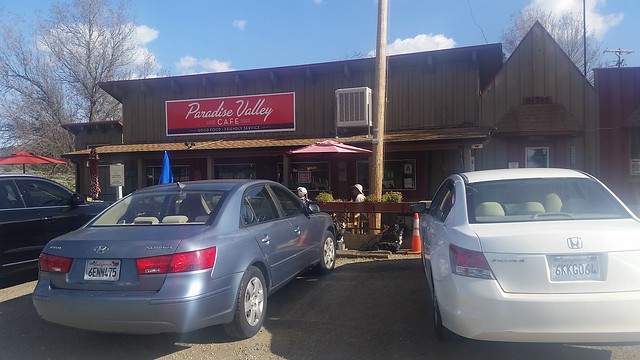 Tami and I sit at a table try to kill some time waiting for Jim and Justice to show up.  Behind our table is some old guy with a keyboard and singing classic rock songs.  After a few minutes Justice shows up and we all order a burger. Justice and I order the Motherlode. Two half pound patties, cheese, bacon, and avocado. Also got sweet potato fries. I don’t know if it was the best burger ever but it was pretty good. 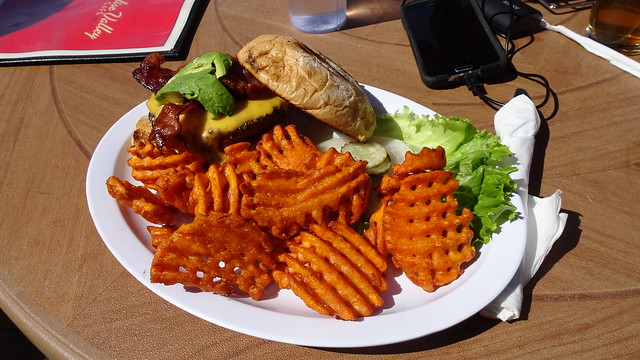 As we are finishing up our burgers Jim shows up and as he is sitting down the waitress asks what she can get him and he points to our burgers and says he wants that. We all hang out for awhile and a couple other hikers show up and eat with us. One is a girl from Idaho named Lilly. Tami is staying with some friends in Idyllwild and they came and picked her up. Her friends created the Guthook app that I use for navigation on the PCT. I talk to them for awhile because my phone is having problems with running the app.

We hangout on the patio talking for hours. Justice, Jim, Lilly, and I plan on staying at the restaurant. They say we can camp behind the restaurant or sleep on the patio. Don’t have to set up my tent? I’ll pick the patio. The restaurant closes at 8 so we just sit around talking. Around 7:00 we go inside where it’s much warmer and order some apple pie. I get mine with coffee ice cream cause vanilla is boring. 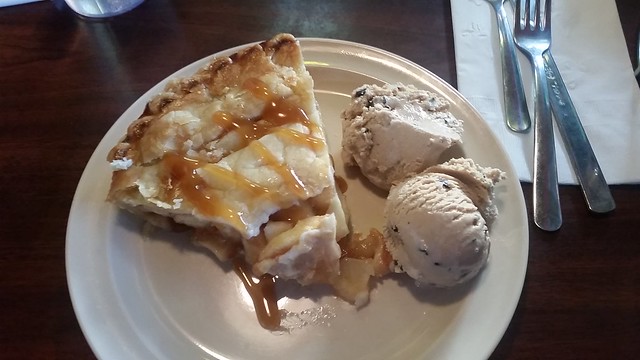 Finally they close the restaurant so we go outside and set up in between tables to sleep for the night. I put in my ear plugs, write some but it’s too hard to stay awake. 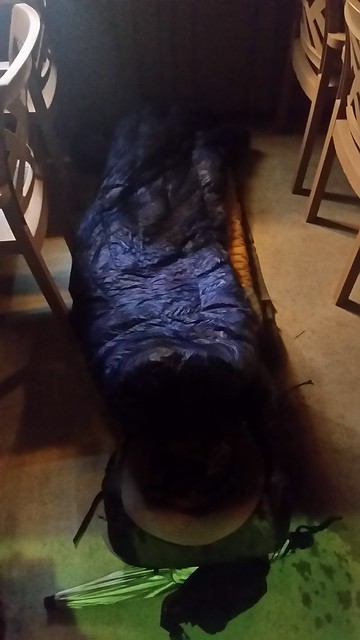 Idyllwild is tomorrow. But before that I have to do a lot of road walking along highway 74 since 20 some miles are closed due to fire.