Last night sucked! It was so damn windy. All night long my tent was flapping. And because it was such a small place to stick my tent and on a decline the material wasn’t as tight as it could be. So part of it was drooping and would flap on my face/head. Needless to say I didn’t get much sleep. If at all.

I “woke” up at 5 and packed up as fast as I could because I just wanted out of there. I had a few bites of trail mix and took a deep breath and made the transition from sleep clothes to hiking clothes. I even put on my wind pants. Putting the sleeping bag away was very difficult. It was 37° according to my watch.

I got everything in my bag double checked I had everything and made sure my sunglasses were in my pocket. I walked 20 feet to talk to another hiker and see where how far he was going today. Then I walked 100 feet to the horse water trough (for horses only.  Lol ok). I set my pack down. Sunglasses gone. What the heck! I went to go look for them but couldn’t find them. I was super pissed. It just wasn’t a good start to the day. 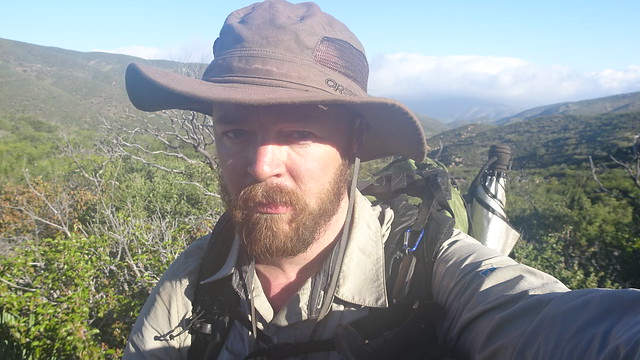 The whole day was just non stop wind. Wind blasting in my face and blowing dust into my eyes. Blowing me all over the trail. The constant wind in my ears so that is all I can here.

Then add in that the trail was mostly downhill and my knee would act up every so often. It just wasn’t a fun day. I kept debating with myself all day whether I want to hitch into Julian at mile 77.3 or continue on to mile 82, a long uphill climb in the afternoon.

By the time I got to the road where you have the option to continue on hitch my mind was made up. I walked up to the road sat my pack down and stuck my thumb out. The third car that passed went by me and then a couple seconds later I heard a horn beep and a guy was backing up to me. That wasn’t too bad!

I walked up to the car and opened the door to ask if he was going to Julian. I got halfway through asking when I saw a Pacific Crest Trail handbook and he said “I know where you want to go.”  I couldn’t believe my luck! I put my pack in the back seat and got in and saw he was in hiking clothes too. We started talking and he, Eric, told me he works for REI and is from the east coast out here visiting to do some hiking and to help hikers out. He hiked the PCT in 1993. He also hiked the AT and the CDT.  His trail name was gypsy because when he hiked the AT in 1990 he was telling someone about all the places he’s been and they said “What are you, a gypsy?”

I told Eric that I wasn’t planning on coming to Julian but a combination of my knee and losing my sunglasses had changed my mind. He starts laughing and says “about those sunglasses. I was just at the 76 gas station and the guy there gave me a bunch of stuff like bandages, bandanas, and these sunglasses. I didn’t really want the sunglasses and was going to throw them away but decided to just put them in the glove box.” At this point he reached over and opens the glove box and reveals these sweet sunglasses. Orange and white Ray Ban wayfarer style glasses. Awesome! I always heard the saying “the trail provides.” My day is getting better!

We arrive at Julian which is a small town with all you need on one road. Eric dropped me off in the middle of the town and I thanked him profusely. My first hitch and it was the best experience I could wish for. Well my first stop was at Mom’s to get me some pie. I saw a Strawberry Rhubarb the other day in Alpine before I started the trail so that’s what I ordered plus cinnamon ice cream. 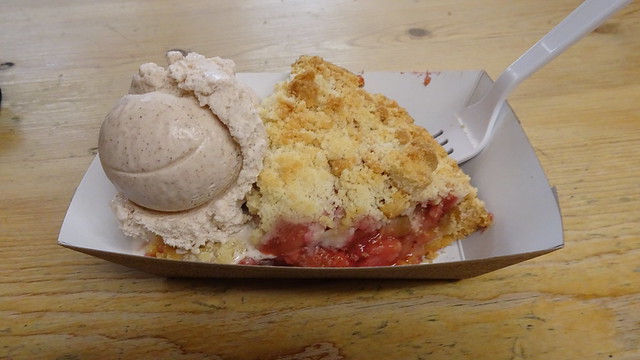 I got my pie and ice cream and sat across from three other hikers. An older guy, a guy my age, and a middle-aged lady (Rusty, Tyler, and Neema) . I was eating my pie messing around on my phone thinking about calling the various lodges when I heard the lady say she just got the plastic place and that it’s like an apartment and that split 3 ways it would be $50. The younger guy asked the others if they should find a fourth. Thats when I introduced myself and said I’ll be your fourth!

So we all finished our pies and ventured out to find the Julian Country Inn. After getting lost for a bit we found this house back away from the main street. It’s a nice little cottage style house. We were in room 5 which was more like a lower walkout basement apartment. Has a kitchen, living room with two comfy couches, bathroom, and bedroom with a king and a full bed. Was super nice! The lady went to the post office and then picked up food to make dinner. 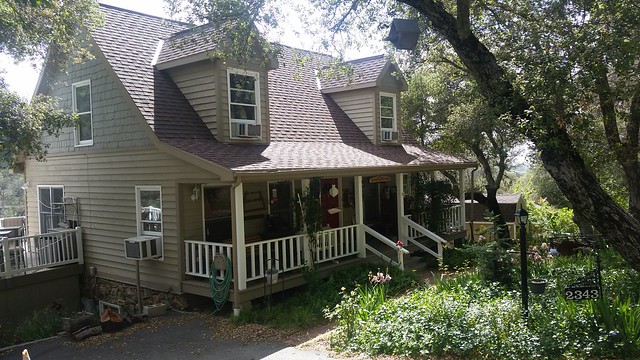 I took a shower and hand washed my clothes. Dirty water everywhere! I gave up trying to rinse out my clothes to the point of the water running clear. Just going to get dirt caked again tomorrow. I go to set my clothes outside in the sun when Neema tells me that there is a washer and dryer. D’oh!

Neema made spaghetti, meat sauce, and garlic bread. So good. Had a nice chat with them. Rusty hiked the PCT in 2003 and Neema hiked the AT in 2013 and was involved with the AT for the last few years. It was a great end to a crappy start of the day.

Sorry for the lack of photos. It was just way to windy.