I woke up at 5 and looked over and saw Jim getting ready. This is one of the first days I really didn’t want to get up. I was comfy sleeping on the porch of Paradise but I needed to get up to do a road walk before highway 74 became super busy. I packed up all my stuff, shoved a breakfast fiber bar, poptarts, and an energy bar into my hip pocket and took off down the road with Jim.

It was another wet day of walking through fog. Visibility was probably around 150 feet and at times it would drop to 50 feet. The first 9 miles of the day was along highway 74. Luckily it wasn’t very busy along the road and we would just step off the road into the wet grass. 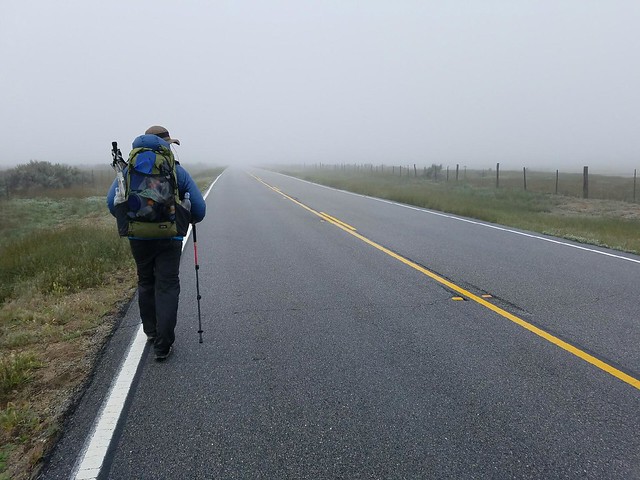 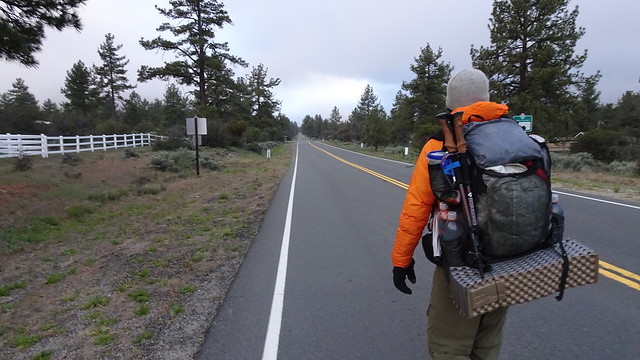 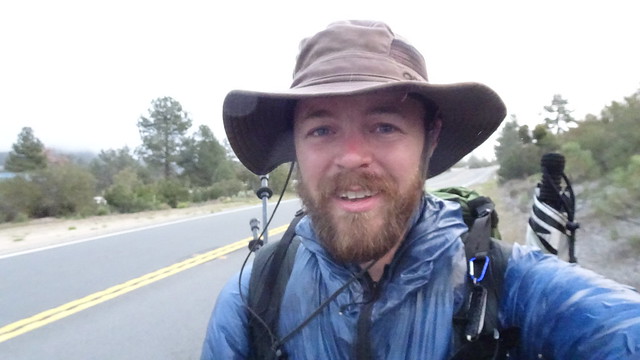 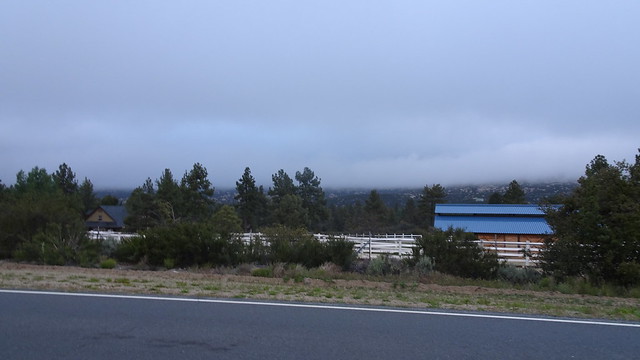 It was a long walk. Walking on the road is not very fun.  It’s hard on the feet and doesn’t feel good. Especially after being used to walking on a dirt trail for the last 150 miles. Around the 8.5 mile mark we came across the Lake Hemet convenience store/ campground store. I was hoping for some sort of fresh baked good but had to settle for a Jimmy Dean sausage biscuit sandwich. We hung out in the store where it was warm looking at our maps for where we had to go next.

A mile or so up the road from the store is Hurkey Creek campground and in the back corner of the campground is a gate to an old hiking trail that hooks up to a forest service road. The trail out of the campground was really bad. I hesitate to even call it a trail since it had been eroded away from water running down it. We got to a sign about a quarter mile onto the trail saying there were fire closure restrictions in place. Certain parts of the mountain were closed due to the Mountain fire in 2013. The trail we were on goes through a small burn section and was closed to everything except hikers. Except there was a fresh dirt bike track on the trail.

The trail was a steep climb and according to my watch I was gaining about 30 feet a minute.  The trail was all uphill for close to 4 miles. Justice is an ultramarathon runner so he was out of my site pretty quick and Jim was moving slowly this morning so after about a mile on the trail I was alone in the fog. Parts of it were rutted out other parts were over grown and the trail all but disappeared. Finally it met up with the service road which climbed as well but no where near as steep. The forest road wasn’t too interesting. Every once in awhile I would come to an intersection and I would see that someone wrote “PCT” in the dirt with an arrow pointing which direction to go. Sometimes I would come across smiley face drawings so obviously others were just as bored as I was.

I wasn’t really paying attention, my mind on autopilot walking along the forest road when all of a sudden an ambulance comes around the corner! The forest road is pretty narrow, two trucks would struggle to pass each other. I was walking down the middle since there are signs everywhere saying forest closed to motorized vehicles. Why would I expect an ambulance, of all things, on a forest road! I quickly jump to the side and they pass me giving me a strange look.

Then right behind the ambulance is a group of 20 some teenagers, kids, and a couple adults walking on the road. None of them have water and it looked like it was still a couple miles to a real road.

I finally get to a paved road and I’m in a mountain neighborhood. I immediately hear the screams of people. What is going on?! So much weirdness in less than an hour. I’m walking along the road looking to my left into the trees where I’m hearing the screaming. I can barely see some houses but not much else. As I continue up the road I start hearing a whirring sound and a screaming kid doppler effect.

A few seconds later I start to hear it again but this time I see someone flying through the trees about 100 yards out. Oh. Someone has rigged up a zip line and a platform through the trees. Looked pretty cool from what I could see.

I continue walking through the neighborhood streets while every 10 minutes or so someone stops next to me to see if I need a ride. I tell them that I want to have a continuous footpath and thank them for their offer. People sure are friendly in Idyllwild!  I’m almost to the center of town when I walk by this corner house and three ladies are in the driveway talking. One of them yells to me “Hey! Are you a PCT hiker?” I respond that I am in fact walking to Canada. She yells back “congratulations! We love PCT hikers! We think you’re awesome! Have a great hike and good luck!” That made me feel pretty good. 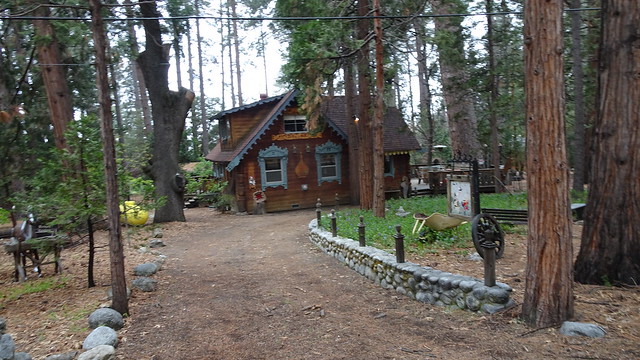 I walk into town and head to the Coffee House to get a hot mocha just so I have something warm to hold since it’s 46°. I let my wonderful cousin who lives nearby know where I am since they are coming up to visit me. I set my bag down and start pulling out my down jacket, base layer top that I sleep in, and some wet wipes. I go into the bathroom to give my self a quick wet wipe bath and get out of my smelly hiker shirt. I comeback outside and see this little dog leashed to the patio. I walk over and say hello and the owner says the dogs name is Bo. Bo was sniffing me pretty hard. I’m sure Bo thought I smelled pretty good. I go back inside the almost too warm coffee shop to get my mocha. There was way too many people. People hovering around the order counter not in line to order, around the pick up counter,  and around the doors. I get my coffee and go back out into the wet and cold. I walk over and say hello to Bo again who is now sitting on the bench his owner is sitting on. 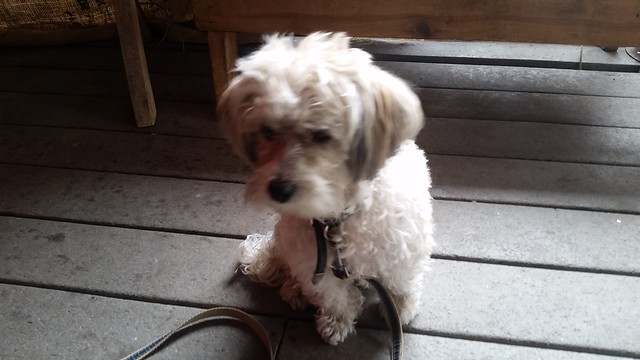 The man starts asking me if I’m a PCT hiker and how far I’ve gone. I tell him I’ve hiked almost 170 miles and started at the border. He asks me several questions about the PCT and keeps saying “good for you. He intoduces himself as Johnny and tells me he’s from San Francisco and has been travelling around the country for 20 months with an Airstream. We talk about Arizona for a bit then he gets up takes out his wallet and hands me $20 and says “here take this for good luck.”  I thank Johnny and wish him well on his travels. Then I say bye to Bo who was pretty excited to get moving since he was probably pretty cold.

As I was sitting there these two ladies with two kids walkout and are standing near me looking at a wooden sign about mounta lions. I told them I saw a couple big cat tracks this morning while hiking in.  One of them asks if I’m hiking the PCT and we start talking about the trail and they were asking me questions. When I told them I’ve hiked close to 170 miles in a little over a week the young boy said he was surprised my feet hadn’t fallen off yet. I reassured him that my feet were indeed hurting and pretty gross looking at the moment. It was pretty fun talking to them and they seemed interested in what I was doing. While I was talking to them my cousin and her husband walked up so I excused myself and gave my cousin a big smelly hug.

I asked if it would be OK to stay the night at her house so I could take a shower, do laundry, and of course sleep in a warm bed. I gathered up my stuff and my cousin offered to carry something so I handed her my wet hat which also had my dirty sun gloves in it. She pinched the brim together and very carefully carried it to the car trying hard not to think about whether the wetness was from the weather or if it was soaked from sweat. Probably a little of both. It was quite funny.

The rest of the day involved the best shower in my life, a giant chicken spinach salad, lancing a blister, playing uno,and watching Bill Nye with my cousins son. Not a bad day at all. Tomorrow I’m getting a ride back to Idyllwild around noon and I’ll meet back up with Jim and Justice where we will stay in a cabin at Idyllwild inn. 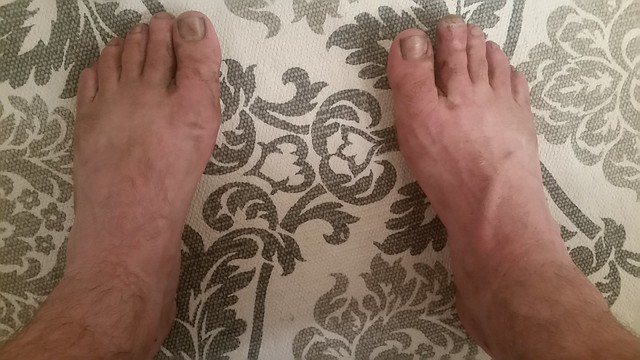 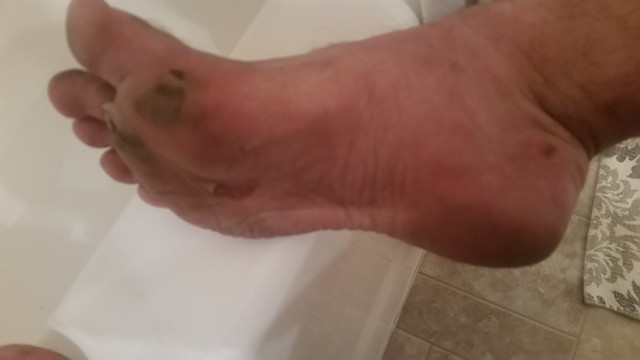 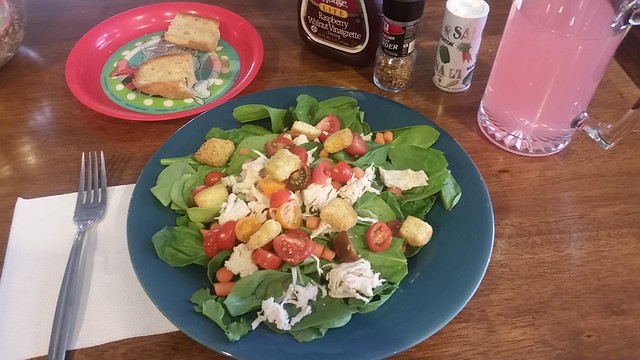 As a side note I just want to thank everyone for all the comments. I really appreciate them.