Last night in the manzanita forest was amazing. I only woke up a few times. It was so dense in there that it seemed like I couldn’t hear any hikers. Except for the guy who set up right next to me. I think he slept on chip bags and tossed in turned. I slept in until about 6. Got up and walked to the front to go to the Porta potties and then sat in my spot on the couch. There were only a couple hikers walking about for awhile.  A few minutes later one of the helpers for Casa de Luna, Molasses, started making pancakes. I had 4 pancakes. So good. 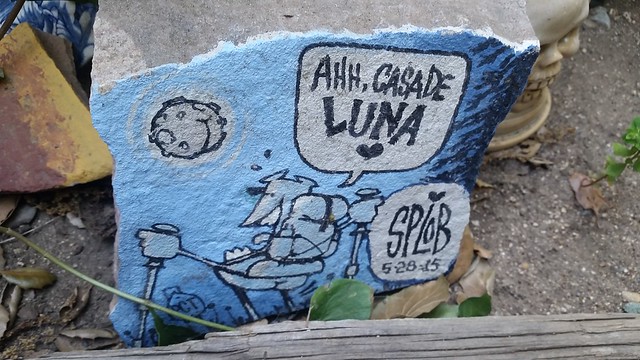 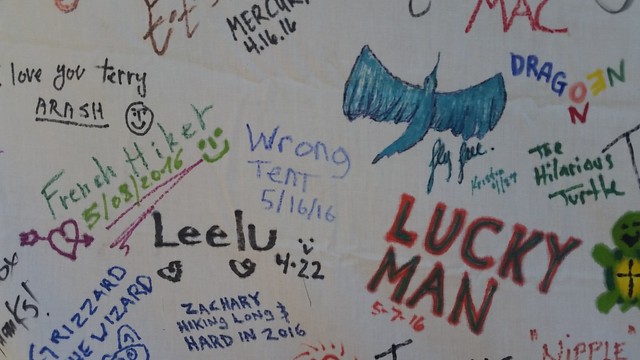 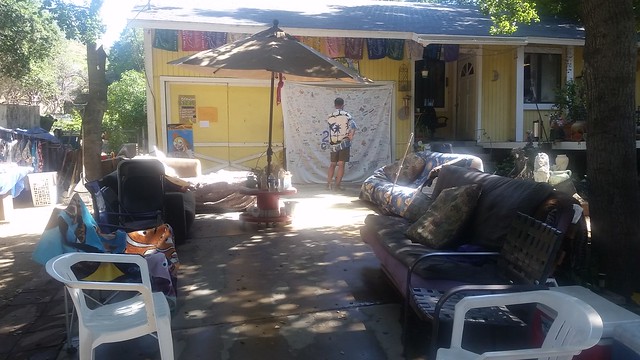 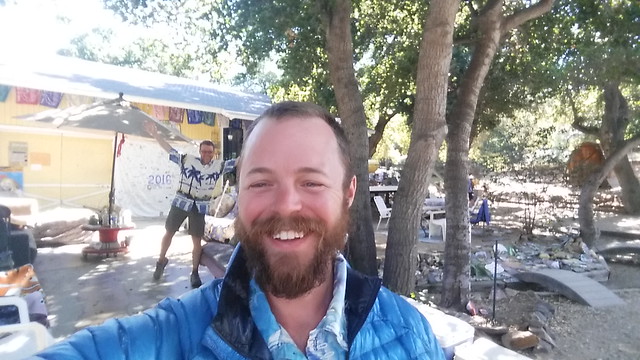 5 Star and I waited around until 11 to go up to b the cafe that was closed yesterday. Someone mentioned another store so I looked at yelp and couldn’t see anything. I did look at the cafe and I saw the cafe was closed from 10 to 4. What the heck! We walk up the cafe just to double check and it was. I wanted a burger… So we went to the market and I got a sandwich, pringles, coffee bean M&Ms, and a chocolate milk. We sat outside in the shade. Some how the table went MIA since yesterday. 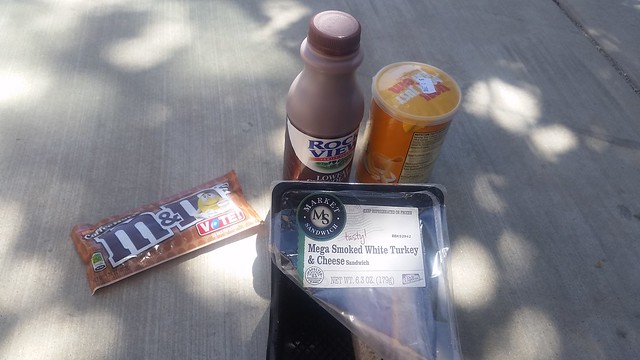 While eating a black kitty cat came by and hung out by 5 Star. I tried enticing the cat with some turkey but she wasn’t interested. A guy walked by with his misbehaved dog and scared the cat away. He tied up his dog to a post and gave him some water. He took lapped up some water and then picked up the bowl and flipped it over. Alright then. 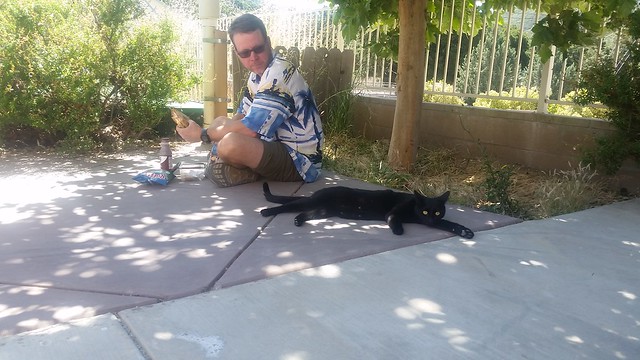 I finished my lunch and went back inside to get a pint of ice cream. 5 Star and I walked down the street eating our ice cream. We get back to the couches and sit for a few more hours. 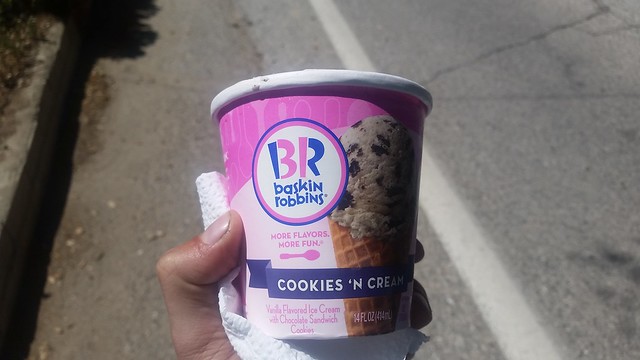 More and more hikers showed up. Loud, obnoxious, smoking hikers.  The group of hikers that yell as a form of communication… We sit on the couches and listen to the inane yelling. They walk off to the store to go get beer. Even better.

Around 2:30pm the sky darkened and we all prepared for rain. A few big drops fell but the sky cleared up an hour later.

5 Star and I sit on the couch listening to all these loud talkers. It’s a bit overwhelming and I wish it was more like yesterday.  5 Star and I keep checking the time on our phones. We want to have a burger at the cafe which opens at 4. 3:50 rolls around and we wall up the street. So long couch, you rested my butt well.

We walk in and it’s tiny but they have a nice covered patio.  You order at the tiny counter and then sit wherever you want. The lady tells us what else is on the menu but not listed. The menu has like 3 things but she lists off a ton more. Apparently, they make their own BBQ sauce and ranch drssing. Except they don’t have any made today. Darn… I order a burger with an egg because it’s an amazing combination. I pick waffle fries as my side. I’m not a fan of waffle fries though. My friend Kyle can attest to that.

5 Star orders a burger also and we sit on the patio.  I go to the bathroom to wash my face/beard since my mustache is a little crunchy feeling. Probably from the pint of ice cream. I get in the bathroom and it’s amazing. No overflowing Porta potties, outhouses, or holes in the ground? I feel like a king on a porcelain throne. Next to the toilet on the wall is a story about the cafe’s cookies that is a Hansel and Gretel theme to it.

I get out of the bathroom and a few more hikers are inside ordering. Two hikers sit on the other side of the patio and then another guy comes and sits at a table by himself. We tell him he can sit with us if he wants. His name is Batman. He wears dark clothes and hikes at night. He isn’t set on the name, I say the Dark Knight is better.

Our food arrives and it’s amazing. The burger was so good. So nice to have red meat. My body craves it.  A few minutes later Overstock, who I met at the KOA a few days ago, and Lydia or Colorado, who I’ve seen occasionally since Ziggy and the Bear, sit with us. I like Overstock she is fun to talk to. I ask Colorado where her dad is and she laughs and says the older guy she was hiking with wasn’t actually her dad and that they were just hiking together. He had to get off trail because he somehow broke his foot and was walking on it for a few days thinking it was just a sprain. 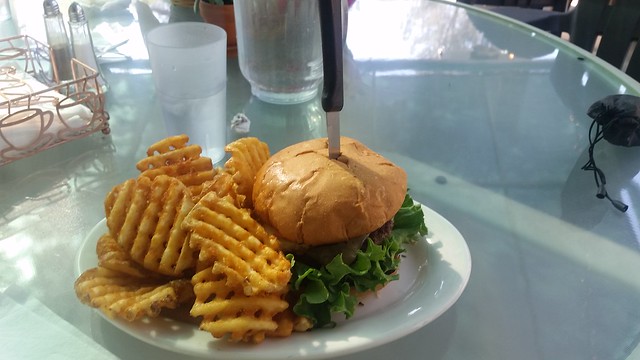 The 5 of us talk about the trail and the characters that make up this story. I ask about the Hobbit. He sent me an email yesterday saying he got food poisoning the night before and was going to take a zero yesterday. We expected him to show up maybe tonight but no one could give us an answer if they saw him leave or anything. Overstock and Colorado give us the story of what happened at Hiker Heaven. Apparently he was having a good time drinking beer and he made some creamy chicken ramen. In the middle of the night Colorado hears him puking his guts out right next to her tent. He repeated this several times over a few hours. Sometimes making it to the trash can. She asks if he is OK and he says “never mix beer and ramen.” They say he slept all day yesterday and that he was on a schedule to take a shower at Hiker Heaven but was out cold and didn’t hear his name being called numerous times.  We talk about the Hobbit and tell Hobbit stories.

We also talk about Rattlesnake. I thought I saw him in Agua Dulce but in couldn’t tell because he was all cleaned up. Wasn’t wearing his cutoff shirt, had a different hat and was wearing shorts, and of course no giant knife. He also was following around this girl and was in the cafe eating with her. That also made me think it was a Rattlesnake doppelganger. Any girl should have enough sense to know something is off with that guy. Overstock and Colorado confirm it was in fact him and that they think the same thing.  Apparently he has been chasing this girl for over 200 miles but didn’t realize he was ahead of her.  He would leave these weird notes on the trail for her. When he got to hiker heaven with her she was talking to some other guy and Rattlesnake was off in a corner brooding before he packed up and left. Apparently they came across him later the next day camped with this girl. Colorado and overstock said she thinks he is rad. Well the girl is only 20 so her brain is still not fully developed.

We continue with the trail gossip until it’s almost 7. We walk back to the house since it’s almost taco salad time. I’m stuffed but the two ladies want some. We get back and it’s packed. I drop some stuff off at my tent and run into Captain who I haven’t seen since Cajon Pass. We sit in some chairs and catch up and then Ducky and Jessica, now Mommy, walk up. Ducky calls me Mystery Tent. Says he likes it better and gets my number.

After dinner commences I go over and talk to Overstock and Colorado again. I ask them to tell The Hobbit our plan to Tehachapi over the next few days.  We continue to talk for awhile and I meet Natalie who has been hiking with Colorado for awhile. The three of them are super nice and I really enjoyed talking to them. I wish I could hike with them or see them more but I don’t think I will. They are taking a zero tomorrow and then hiking slower or taking time off so that they get to Kennedy Meadows by mid June. I’ll get there in a couple weeks.

Colorado and Natalie both have blogs too.

Around 9 we get up and head back to the manzanita forest. I say goodbye to the three ladies. Hopefully I’ll somehow run into them again. You never know with this trail.

Tomorrow we have a 20 mile road walk to bypass the Powerhouse fire closure from a few years ago.

Day 27: the most interesting road walk