Last night before going to bed was a bit creepy.  There is a parking area right by the cabin and there were several cars that came and left throughout the day. Around 4pm an Ford Expedition came and backed in to a spot so I could see the front end from the cabin. Around 6:30pm a guy and girl walk up the path and back to their truck. Then they just sat there in the truck for 45 minutes. What the heck… Then I hear the engine start but the guy turns it off after 5 seconds. They both get out and the girl sits on a big rock while the guy paces around smoking. 10 minutes later they get back in and just sit until it was well into dusk. Finally, just as its about to get dark they drive off after idling in the parking area for a few minutes. Very strange. I woke up several times throughout the night to look around and see if there were any cars.

I woke up to Jim (5 Star) rustling with his gear in his corner of the gazebo around 5:30 am. I started to pack up too and just as we were getting ready to leave a car showed up. Justice (The Hobbit) was still laying down and just starting to wake up. He later said that another car showed up at 6:45 and a guy had a knife on his hip. It is a fishing area so I’m sure it’s nothing but why must people be so creepy? 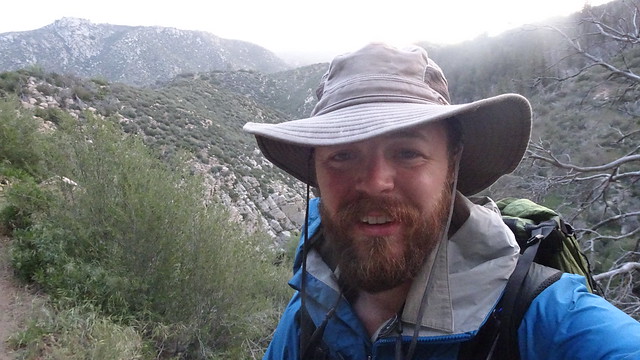 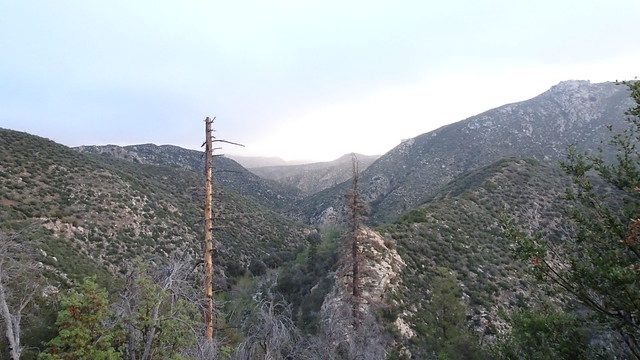 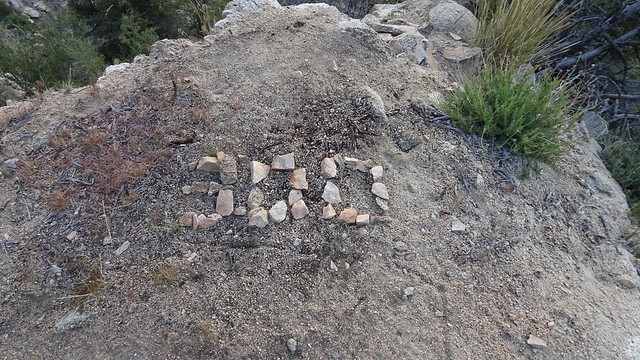 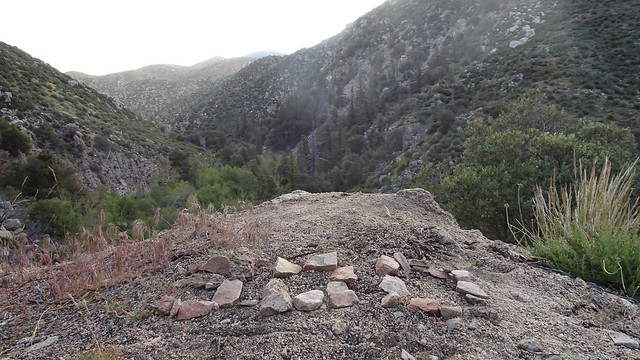 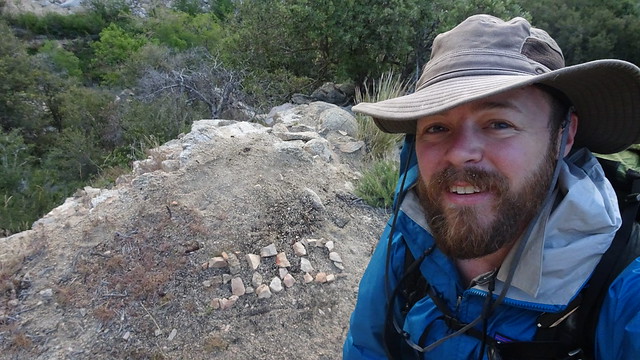 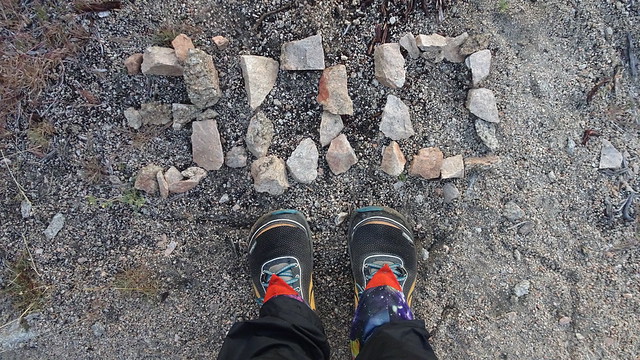 The hike for the day mostly consisted of walking along the top of a canyon following Deep Creek. The creek is pretty popular among locals around a certain section where there are hot springs. The water gets pretty polluted in these areas with trash and toilet paper. People are disgusting sometimes. 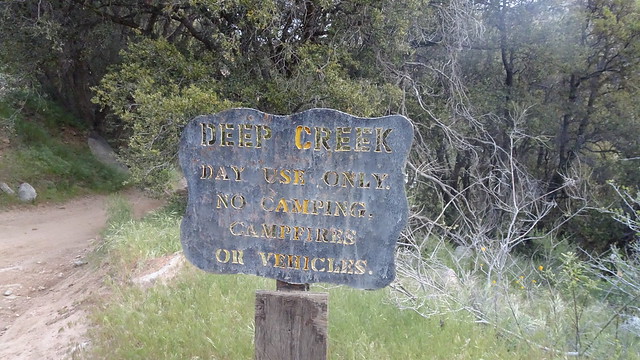 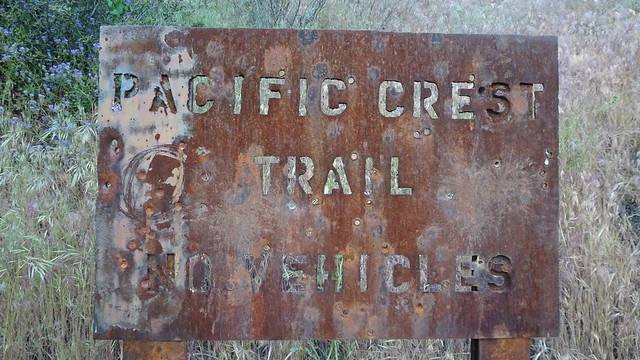 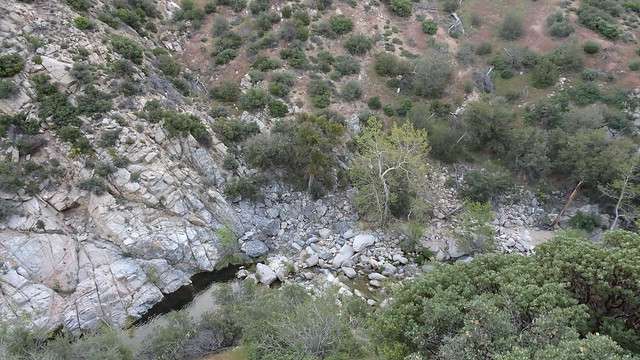 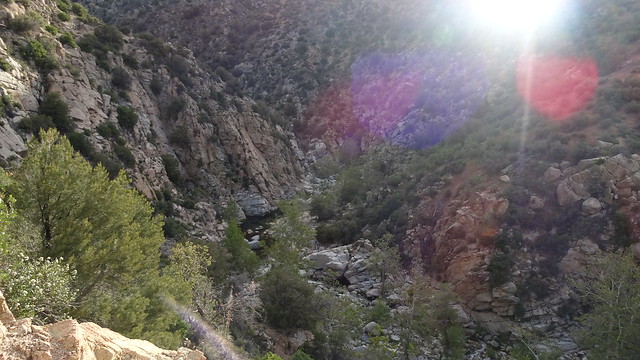 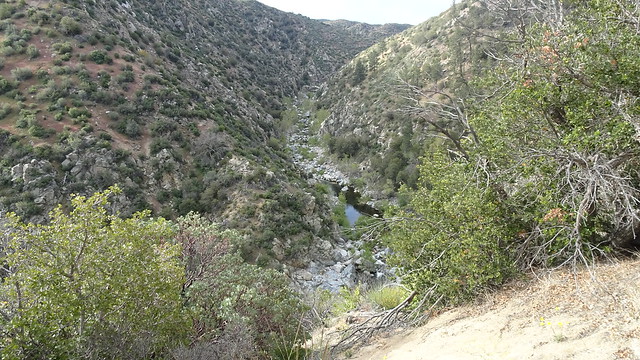 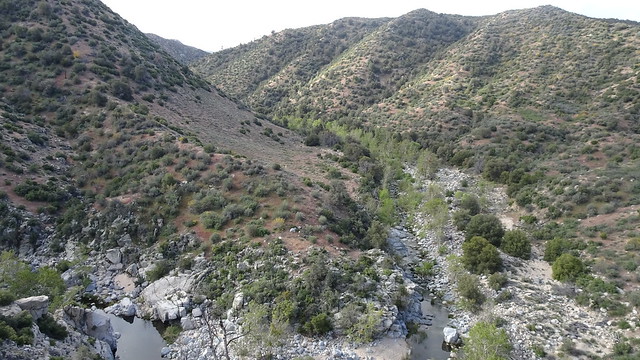 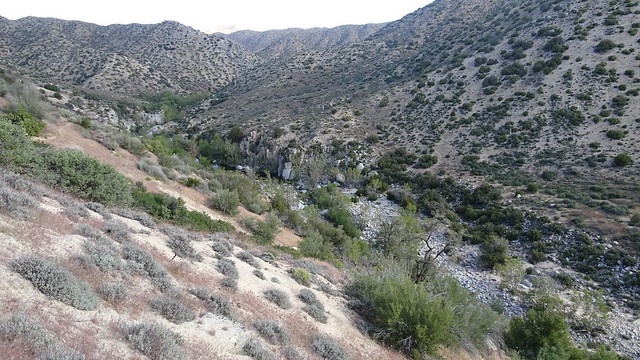 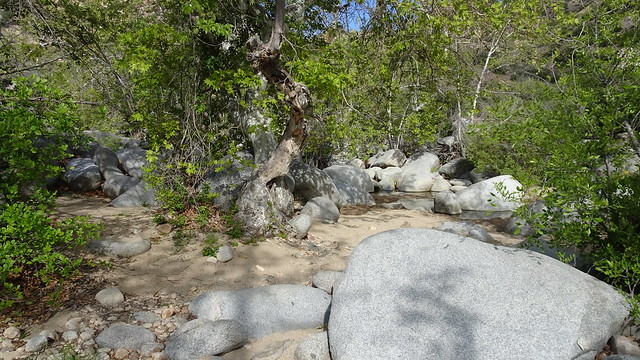 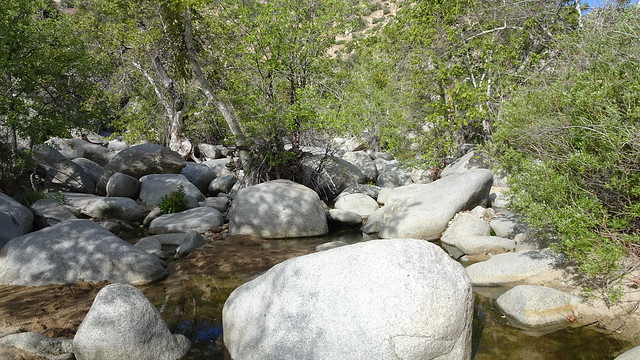 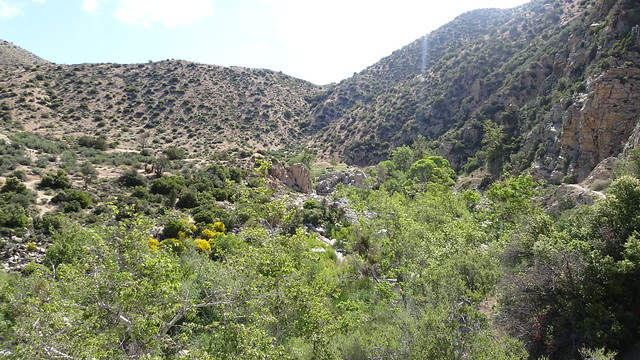 At mile 307ish we came around the corner and saw a bunch of people hanging around and several large tents. Clearly not thru hikers. I had no plans of stopping because of all the people and since the water has a high fecal content I didn’t want to stick my feet in the water. Open wounds from blisters and poop water don’t seem like a good idea. It also smelled like poop walking through the area.

The good part was as I was rounding a corner there were two girls changing into their bikinis as I was walking by. I gave them a nod and kept on walking towards them.

A couple miles later 5 Star and I stopped in a shaded area to have lunch and take off our shoes.  I ate a lot of food since I had so much and wanted to lighten my pack. After about 15 minutes The Hobbit came by and had early lunch with us. 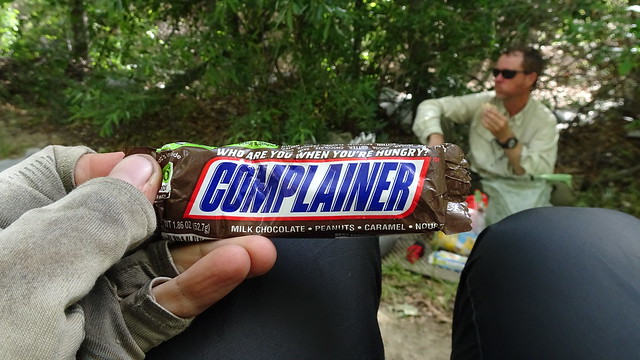 I’m saving this for the right moment

As we were wrapping up lunch Rattlesnake walked up and sat down. Last we saw this strange guy was at Ziggy and the Bear. He stayed there for a couple hours and then decided to head to the casino down the street. Well he made it to the casino apparently.  5 Star asked if he won at the casino and Rattlesnake replied “no, but I won at the buffett. After i was finished I couldn’t move.” Apparently, he slept in the parking lot and gotten woken up by a goat.

We got up and said bye to Rattlesnake and took off hoping to out pace him. About an hour and a half later I rounded a corner and saw a dam.  I think it’s the Mojave dam but I’m not sure. Not sure what water it’s damming up either. 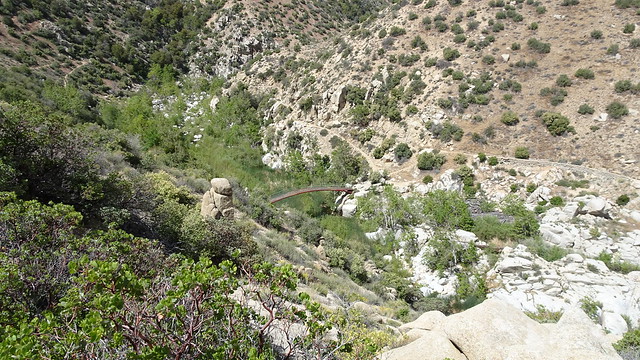 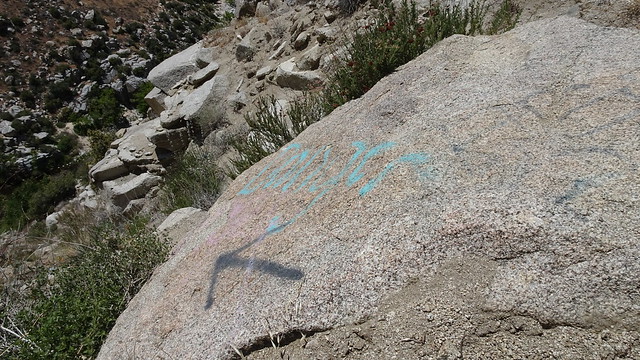 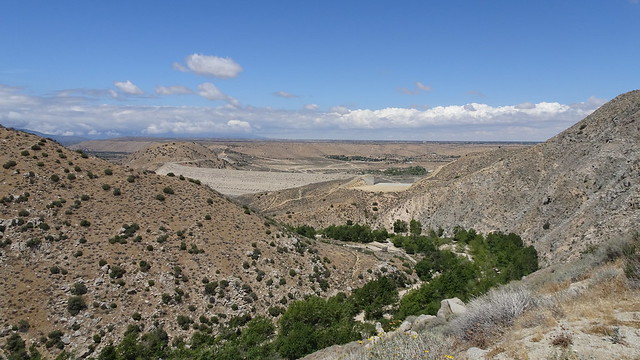 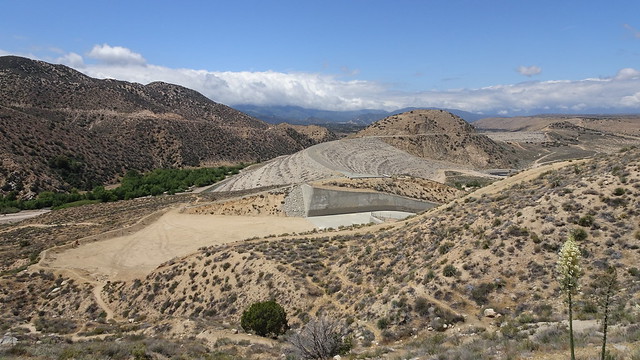 Around 11:30 we got to our water source that wasn’t poopy. The PCT crosses a fork of the Mojave river. Usually there are rocks to step on but not this time. I went up stream a bit and tried to cross on this small tree but I slipped and fell in. Up to my knees. Damn! I even ripped my wind pants on my knees. My mood wasn’t the greatest after that. Wet shoes and socks and the trail was on this very fine dust so it was just making mud in and on my shoes.

A mile later I find The Hobbit under a tree just past a road crossing.  I stop and take off my shoes and socks and let them sit on the side of the road hoping they’ll dry. 5 Star and The Hobbit joke how funny it would be if someone ran over my shoes.

The Hobbit gets up and takes off while 5 Star and I put our shoes back on and put our food bags away. We only have about 4 miles or an hour and a half more of hiking left in out 20 mile day. Luckily the view was pretty great and so my mood improved.  It really is amazing out here. Words and pictures can’t do it justice. 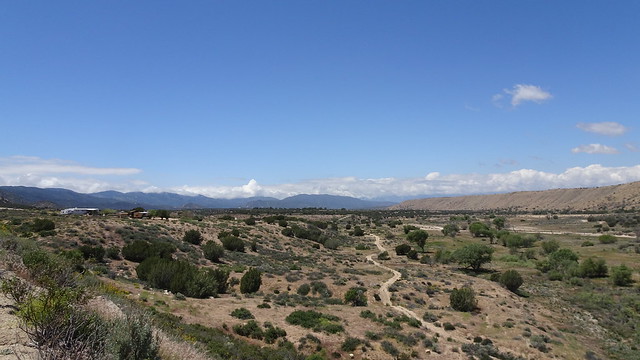 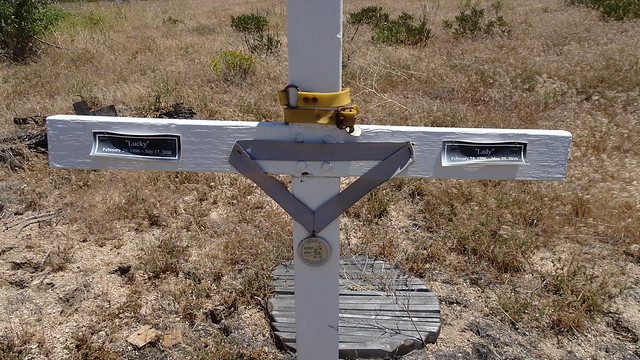 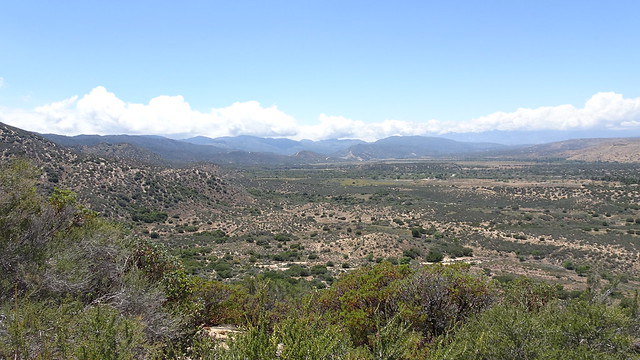 30 minutes later I finally finish my audio book. Book 11 of the Wheel of Time series. Each book is about 35 hours. I’ve been slowly listening to this series for almost 3.5 years. Only 3 more books to go! I switched to music for the rest of the day and immediately my pace quickened. I got to a sign pointing to a campground 3/4 of a mile off trail and I wasn’t sure if the Hobbit said he was going there. It didn’t seen like he would go that far off trail but I wasn’t sure and I couldn’t find his shoe prints. I waited for 5 Star and he agreed and didn’t think he would go there.  So we continued on.  Eventually we came to some dirt that left better foot prints and I saw Hobbit tracks. 10 minutes later we rounded on a creek and there was the Hobbit sitting on a rock. We were at our campsite for the day. A little area just off the he trail near the creek.

We set up our tents and eat dinner. As we were finishing Rattlesnake walks into our camping area. Which is a bit off the trail and not visible from the trail. He asks if we are stopping already which we say yes. He says he wants to get to Cajon Pass tonight. That’s like another 22 miles and he already did 10 miles. More power to you Rattlesnake.

I ran out of water so 5 Star and I went to go get some from the creek. I came back filtered the water with my Sawyer Squeeze. As I was filtering 5 Star comes back and another hiker is worth him. A French Canadian named Wishbone. She has a necklace with a wishbone on it. She sets up her tent and does some chores and then comes over and talks to us for a bit. Another hiker named Michael also stops and sets up.

Michael comes over with a pot of food and sits down to talk to us. 5 Star, the Hobbit, and I are sitting on our sleeping pads. I have a 1/8″ foam pad to protect my inflatable and to also use as a sit pad. The other two have these 3/4 inch closed cell foam pads that are cheap and popular. They are a bunch of panels that fold up accordion style. Star also has an inflatable since he has 5 Star sleeping accommodations. The 5 of us are all sitting around talking when the Hobbit adjusts his sleeping pad which was folded on to itself and shoots gravel and sand at Michael and hits him right in the face and I’m sure some into his pot of food. 5 Star, Wishbone, and I start laughing. Michael is stunned and The Hobbit has no idea what just happened.  We tell him and he felt so bad and kept apologizing. Michael didn’t seem to mind and laughed it off after wiping his face of gravel and then checking to see if his noodles contained rocks.

We talk for a bit more but I was getting cold and needed to do some writing before it got too late so I turned in. The Hobbit also turned in. 5 Star conversed with the other two for a bit before they too got up. It gets cold very quick once the sun starts to drop. Especially with a slight wind.

Tomorrow we have a shorter day. It’s oy 20ish miles to Cajon Pass where there is a trailside McDonald’s. We are picking up a resupply box from the Best Western and also staying the night for much needed showers, laundry, possible pool, and then a Continental breakfast. We wanted to make the most of the room and semi-town so we are going to do a shorter day tomorrow so that we can get to Cajon Pass super early on Monday. So probably 17 miles or so tomorrow and then 5 on Monday

I kept forgetting to post this picture. It’s from the second day. 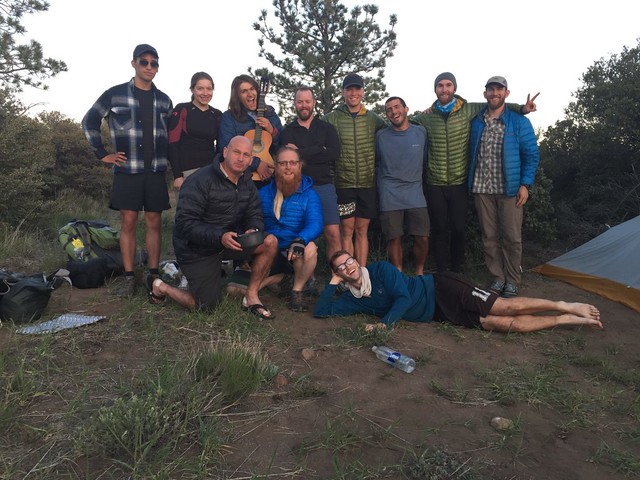