Most of my time and energy was spent researching what pack, tent, and sleeping bag I would bring with me for 5 months. In my opinion this is the most important decision a thru-hiker will make. When it comes to these items lighter is better. These are the items you definitely do not want to cheap out on. You can easily save at least 2 pounds or more for each item over your general backpacking gear if you look into small companies that focus on ultralight gear. Zpacks, ULA, Gossamer Gear, Enlightened Equipment, and Tarptents are just a few companies that offer quality products that are extremely light. For me personally I saved close to 10 pounds when I switched my pack, tent, bag, and sleeping pad. Had I known or been introduced to ultralight backpacking sooner I could have saved myself a lot of money and back strain.

Packs
I wanted a very light weight pack that was also comfortable. My old heavy ass REI Mars ’07 pack was very uncomfortable and did not sit well on me.  The shoulder straps had zero padding and didn’t have much width. It was my first pack and I had no idea what I was looking for and just settled on the first one that the REI guy had me try on.

I spent a lot of time reading up and watching reviews of different packs. I switched around trying to decide between a Gossamer Gear Mariposa, ULA Ohm 2.0, and finally decided on the Zpacks Arc Blast.  The Arc Blast is an amazing pack that is made of the black magic material that is Cuben Fiber. This material is incredibly light yet very durable. It utilizes a flexible carbon fiber frame that allows the pack to create an arc. This creates an air gap between a mesh panel that goes up against your back and the main body of the pack. The reasoning behind this is that it allows air flow between the pack and your back preventing a sweaty chaffing back. 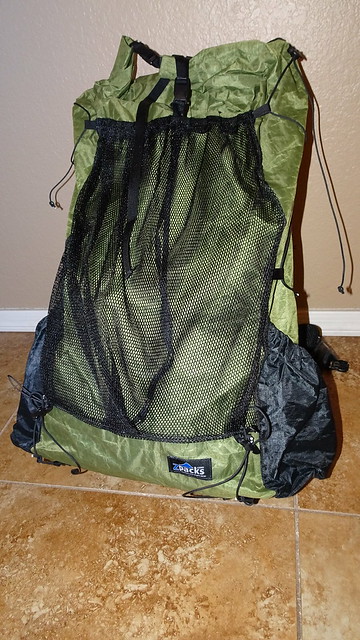 After I received my Arc Blast I was blown away on the quality, comfort, and, of course, how it defied the laws of physics with how light it was. The pack weighs in at gravity defying 21 ounces, at a base pack weight of only 9.75 lbs it doesn’t even feel like it’s on my back. I was glad that I spent a bit more to go with this pack. I went with the 60 liter version mainly because I was worried about fitting the heavy BearVault BV500 bear canister in the pack. The difference in the 45L, 52L, and 60L is the depth (5.5″, 6.5″, and 7.5″). I’m pretty sure I could have gotten away with a 52L but I wanted to make sure I wouldn’t feel the bear can protruding into my spine. Also, it was only 0.2 oz difference.

While researching ultralight tents I quickly decided that I would most likely go with the Tarptent Protrail. I’ve read reviews of other thru-hikers who used the Protrail or its older brother the Contrail and they all had positive things to say about the tent. As my research in gear continued I noticed that a lot of people who switched to a Cuben Fiber tent always seemed to mention that the Cuben Fiber doesn’t hold onto water or sag like a Silnylon tent will. 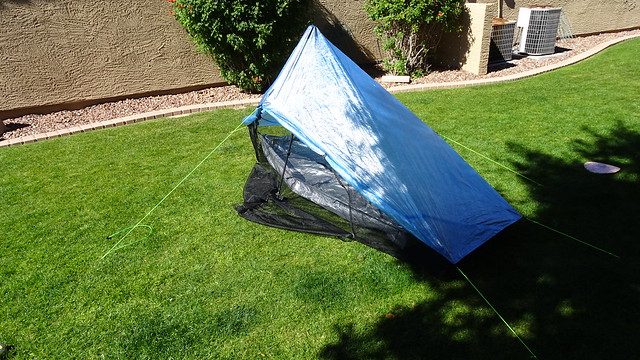 I decided to go with the Zpacks Hexamid Solo. At only 15.4 ounces this tent is incredibly light. Although, I did decide to go with the poncho bathtub groundsheet so that adds an extra 1.9 ounces. So mine comes in at 17.3 ounces. The Hexamid also is made out of the gravity defying Cuben Fiber material.  The tent Cuben Fiber is very thin, so thin that the material is somewhat transparent in the right angle of light. Even though the material feels like it would rip like tissue paper it is actually surprisingly quite durable, however, it will rip if it is handled roughly.

I might be taking a big risk with my choice of sleeping “bag.” I put “bag” in quotations because technically it is not a bag, it’s a quilt. Basically, the difference between a sleeping bag and a quilt is the bag goes all the way around you and you lie on top of the bottom part of the sleeping bag whereas with a quilt it only goes on top of you and on the sides of you. The rational behind this has to do with how sleeping bags and quilts keep you warm. The insulating material only works when it is puffed up, so in theory the insulation underneath you in a sleeping bag does nothing to keep you warm since it is compressed. Therefore, that insulation and material can be considered extra weight. That is where quilts come in, they are lighter since they use less insulation, material, and don’t have full length zippers. Also, quilts cost much less than sleeping bags when comparing similar weights and temperature ratings.  For comparison a Zpacks 20 degree bag that weighs 16.7 ounces costs $420. I decided to go with the Enlightened Equipment Revelation quilt. It comes in at 19.79 ounces with a 20 degree rating, which cost $250. 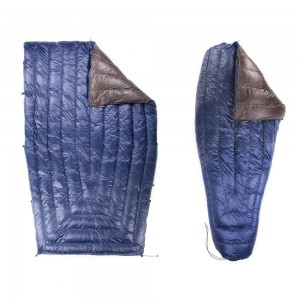