We set off along the trail and into the green tunnel. Within 5 miles we came to Highway 26 and there was a table and some disgusting outhouses. We sat at the table awhile eating breakfast. Tami has ziplock bags of cereal and powdered milk. She ate cocoa krispies while I ate my millionth bar. Gag me with a spoon. So sick of anything peanut butter and chocolate flavored. 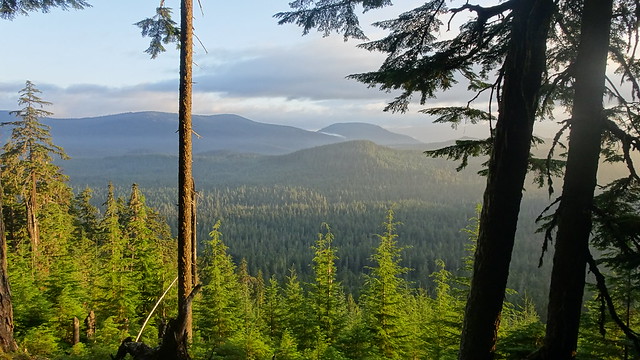 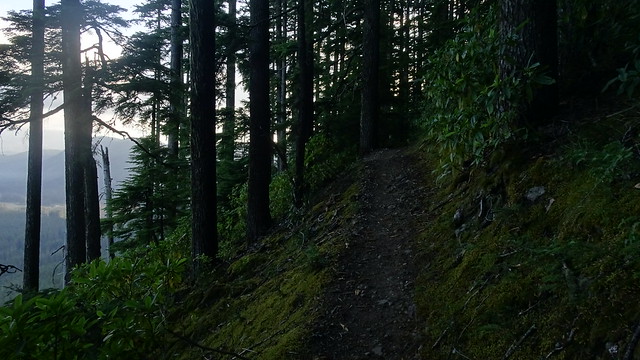 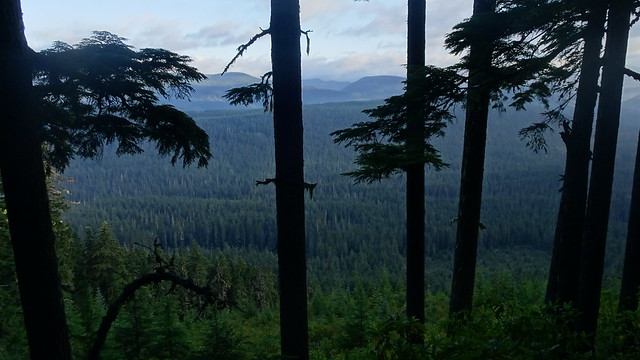 We got up from our nice break and did a few hundred feet of climbing before dropping back down to Barlow Road. We took another break since we were making good time and had our 1,800 foot climb to start. I devoured my Korean BBQ pork jerky. After 30 minutes or so we finally got up so that we could see what our tree-trunk hiker legs could do going up Mt Hood to the lodge. 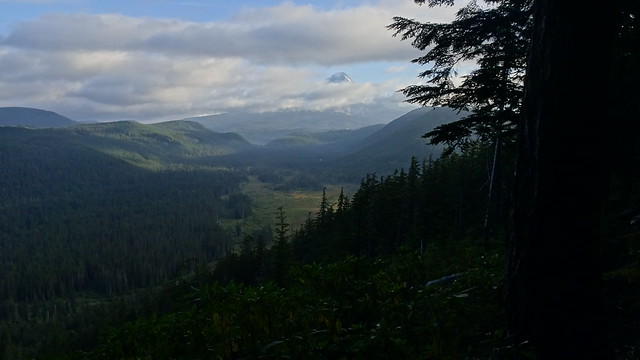 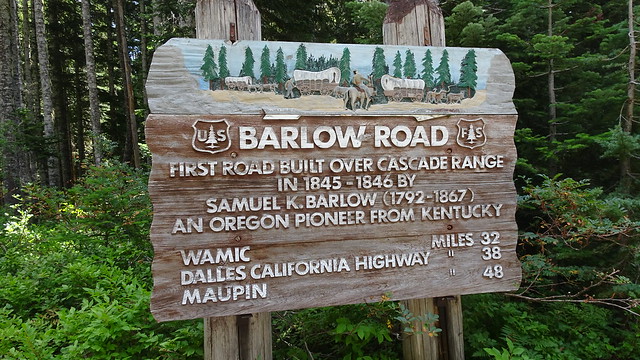 Of course we came across huckleberry bushes being weighed down by their deliciousness. So I helped to ease the burden. The climb wasn’t too bad. It was pretty gradual. We passed some lady meditating on a log with her arms straight out to her side at a bit of an angle. She never opened her eyes as the world’s loudest hikers tromped through the woods. 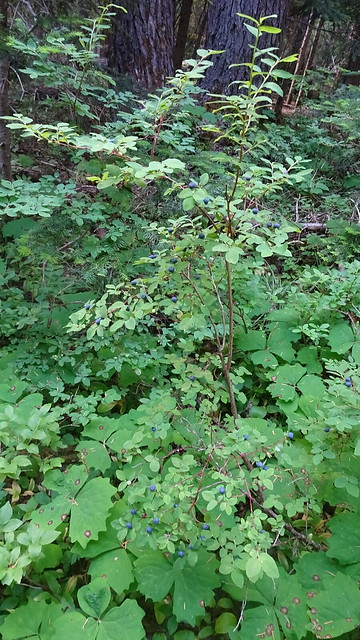 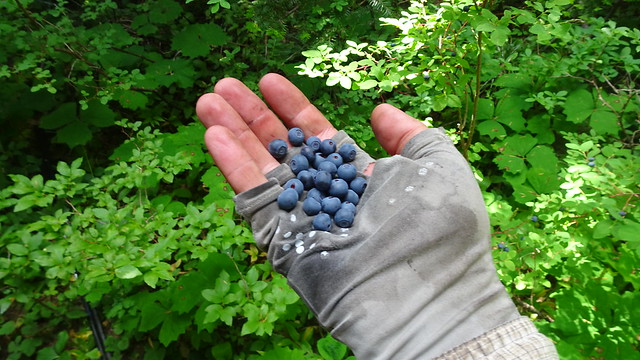 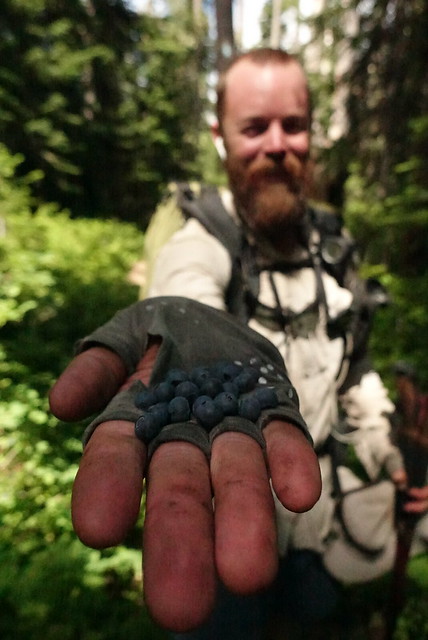 We broke out of the tree cover and could see the angsty Mt Hood hiding it’s self in the clouds. Tami and I joked about how Hood is just a moody teenager. We liked it’s older brother Mt Jefferson better. At this point we hit sand. Lots of sand. I felt like I was walking back from the beach. I could feel my shoes full of it. 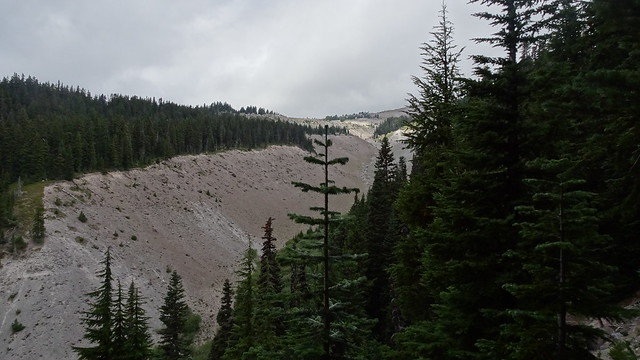 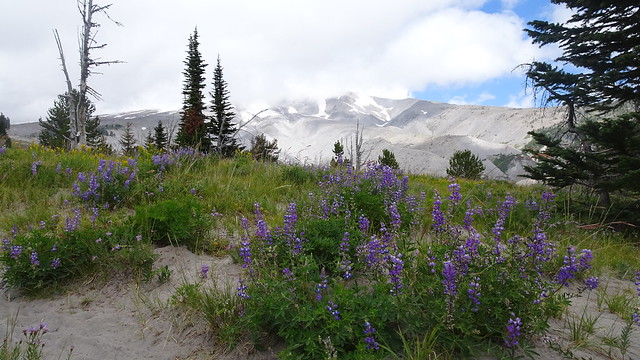 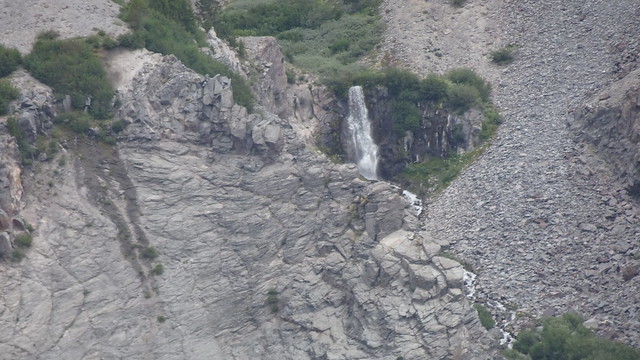 Eventually we came up over a sand dune (not really) and there was the lodge! Woo! Almost shower time! It was getting cold and windy at this point so a warm shower was sounding better and better. But first we had more sand to cover. We peaked out and the lodge was actually below us at this point. That’s just the way the trail works. We started making our way back down and came to a valley where the trail makes a hairpin turn and over a tiny little creek. Holy smokes was it cold and windy! I stopped because sand was blowing in my eyes so I put on my sun glasses while Tami cowered from the wind behind me. 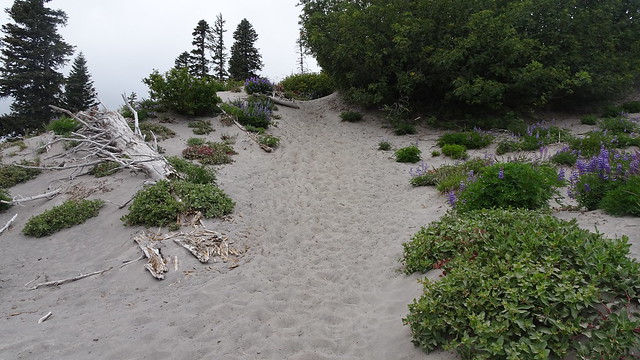 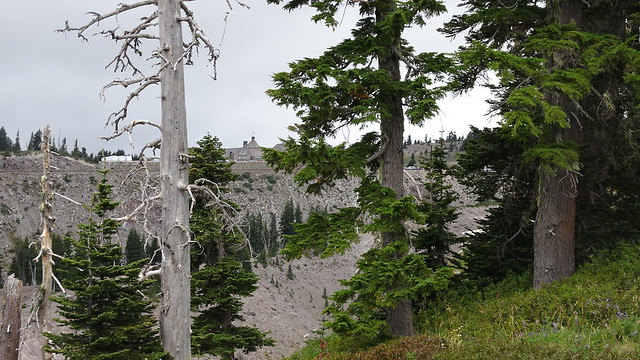 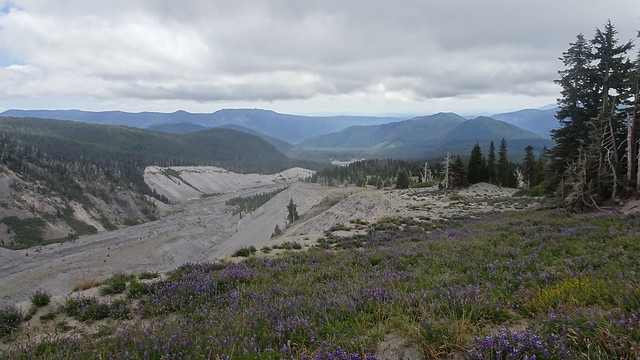 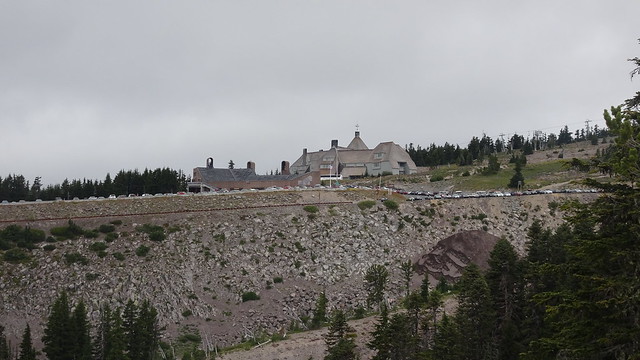 We pass a huge camping spot that must be very popular. There is a hiker sitting there and I make the mistake of asking her if she ate at the lodge yet. Then Tami and I get crazy thrown in our faces. She went on about how she is hiking the trail with her husband (I think?) and that she hasn’t seen him in a long time cause they separated but she is hoping he’ll show up today. Tami and I smiled and nodded as we left her to her craziness. We could not figure out what the deal was. Was she married? Did she seperate from him on the trail or did she mean they just got separated while hiking? If you did just get separated while hiking, why would you keep hiking and not try and catch up to one another? I don’t know.

We get to the lodge and we are walking through the parking lot and there are people with skis and snowboards. What? It’s August! I walk up to a guy and say it’s crazy that you’re skiing in August and ask if I could get a picture of him with his skiis. Turns out I picked the biggest asshole on the mountain. He makes a comment about how I’m wearing shorts. OK… I then try to explain some more that I didn’t know you could ski in August out here. He looks at me as if I’m an idiot. Tami pipes up and says “he’s from Phoenix. They don’t have now there and he just wanted a picture because it is funny to see people skiing in August.” He says OK and then just kind of looks at his skis. I take a picture and walk away. What a massive asshole. As we are walking in there is a young couple with snowboards and they completely understand snowboarding in August does seem rather strange and we get their picture. 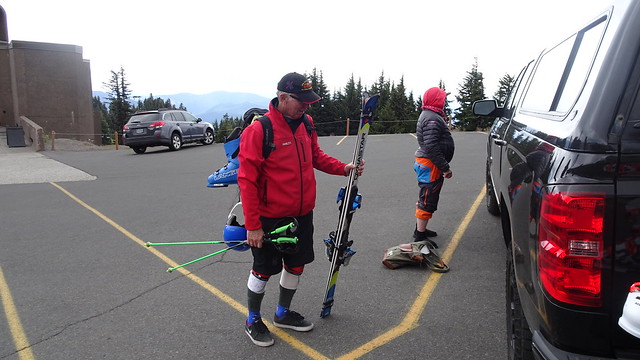 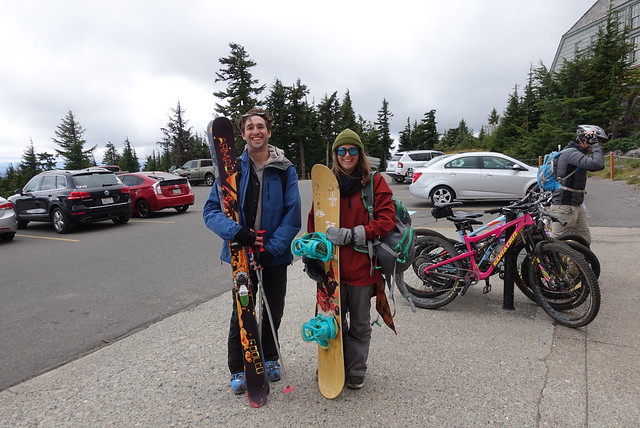 We walk inside and it is super busy. We go up to the front desk and check in to see if a room is ready. The lady behind the counter is not friendly at all. She must hate our smelly kind. To be fair, this is a nice establishment and thru-hikers are trashy. Behind the counter is Heidi. A 9 month old St Bernard. There is always a Heidi. She is so cute! They take her out during the day to socialize but she just got done and is sound asleep on her bed. What a precious baby. I just wanted to curl up and lay on the bed with her. Also behind the desk was an axe that said “Here’s Johnny!”  Timberline Lodge was used for the exterior shots of hotel in The Shining. 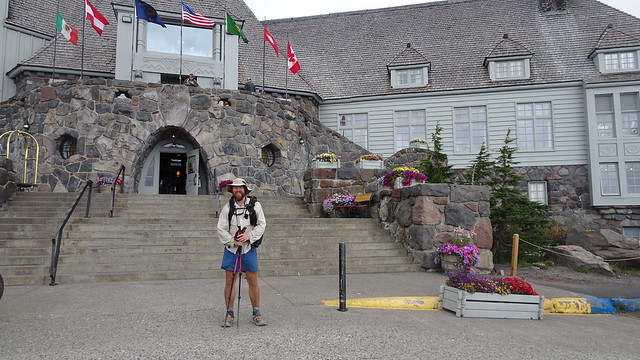 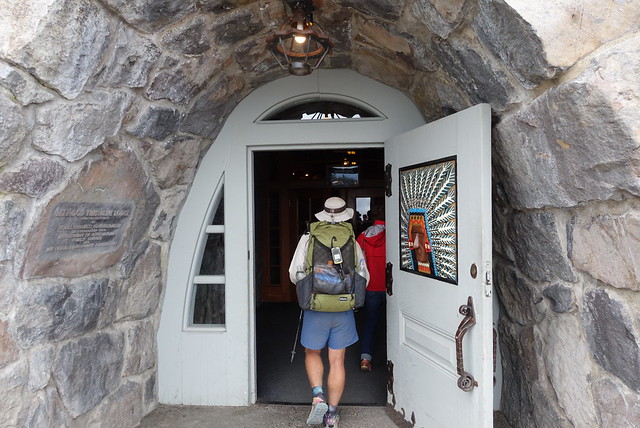 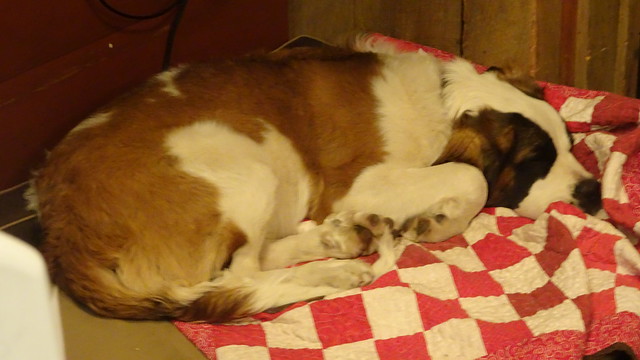 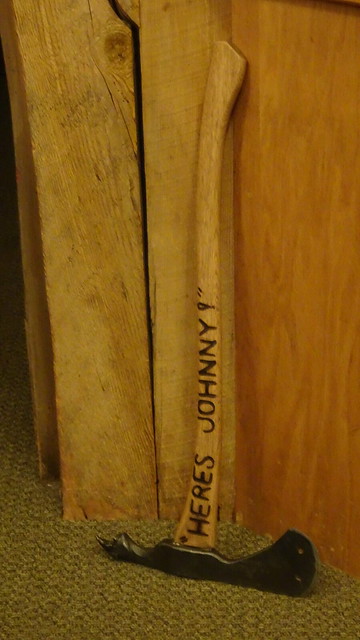 We have to wait a bit so we decide to go down to the Blue Ox bar to have pizza. This “bar” is literally just a bar and then a few tables on the other wall. It’s tiny! They story goes that in the 1930s while the lodge was being build they realized “oh crap there isn’t a bar!” So they converted the wood pile room into this shoe box size bar. We eat our pizza and the second biggest asshole on the mountain shows up. This lady sits at the table next to us and waits for her husband for about 15 minutes. Finally he shows up. He just got down snowboarding. She’s trying to talk to him and ask how it went and what he wants to drink and eat. He either is completely ignoring her or gives one word answers. Clearly he didn’t want to be there.

We finish eating and see that our room is ready. The room is a bit small. Has a queen and a twin size bed. We take our showers and then meet with Tami’s friend who is working on a PCT section hiking book for Oregon. Tami did the Washington section. We decide to go down the mountain a bit to Government Camp to this BBQ place. We get there and it’s an interesting place. We head back up the mountain and back to the lodge. I go to the bathroom and when I come out Tami is on the phone and it isn’t a good conversation. Her husband broke his foot dirt bike riding. In whirlwind she calls back her friend and he picks her up to take her to Portland so she can catch a flight home.  Now I’m all by myself in the room. Crazy turn of events!

Day 94: Walter and Ethel go for a woodland waddle