The worst part about a zero in town is having to get up the next morning. The bed is so soft and comfy. I just want to stay in it all day. Alas, the trail won’t hike itself. Yesterday I called Shasta Taxi and asked for the earliest pickup. My taxi would be here at 6:15. I woke up at 5:45 and packed up the rest of my things and filled my water bottles in the tub. Classy right? By 6:05 I was ready and I did a quick double check around the room and walked outside. I put my key in the drop box and walked to the sidewalk to wait.
At 6:15 exactly the taxi pulled up and I hoped in. We had to pick up another hiker before heading to the trail. We pulled up in front of the motel and no hiker. It wasn’t quite 6:30 when he was scheduled to be picked up but close enough. The driver asked if I wanted to wait and I said I could wait a few minutes. A couple minutes later a hiker I didn’t recognize came out of a room and got into the taxi.

I got back to the trail at 6:45. My pack felt heavy and it would be a long day of uphill. The trail was at 2,600 feet and it would climb all day to a little over 7,200. The first part of the day was the majority of the climb to 5,800. I was hoping for a cold and overcast day but the trail gods had other plans. Hiking in comfort is strictly prohibited on the PCT. 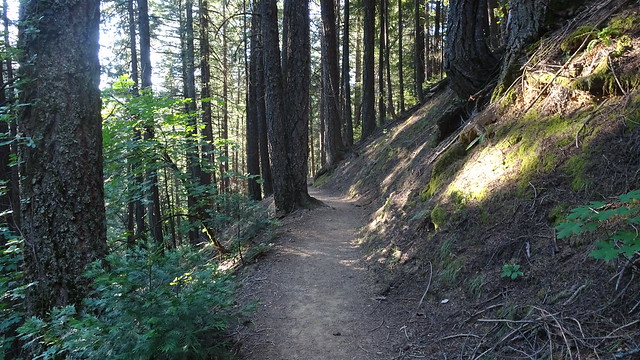 I walked on to the trail fiddling with my trekking poles and the trail did an immediate climb. I realized I forgot to turn on my tracker so I had to drop my pack and turn it on. I shouldered my pack and pulled out my pop tart to eat while I slowly walked uphill. The other hiker was a bit ahead of me and going a little faster than my leisurely stroll. In finished my pop tart and picked up the pace. I started an hour later than usual, I have an all day uphill slog, and I wanted to get 30 miles in  but not hike past 6.

The trail was in the trees as usual. I which is nice when there is an all day event of climbing. I pounded trail and was surprised that I wasn’t sore or moving sluggish like I usually do after a zero. I think because I still walked at least 5 or 6 miles each day in town to get food that my legs didn’t tighten up. 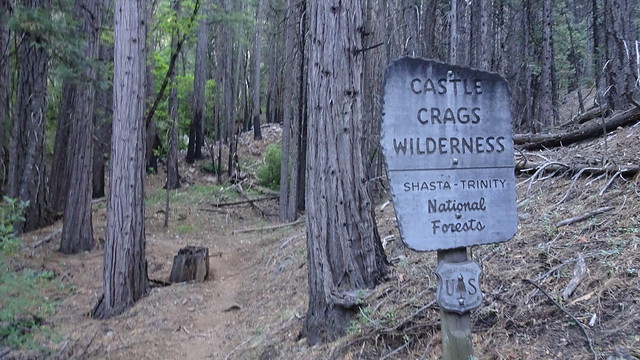 I forgot to figure out the water situation while doing nothing the last couple days. I came across a small stream and sat down just before it so I could figure out what my water situation for the day was. I wrote down a couple places to get water and I didn’t have to get water from where I was at. I got up and just as I was about to step over the small stream I saw a piece paper in a plastic sleeve. It said “DO NOT DRINK WATER.”  Alright then. Wonder what the deal is with that. 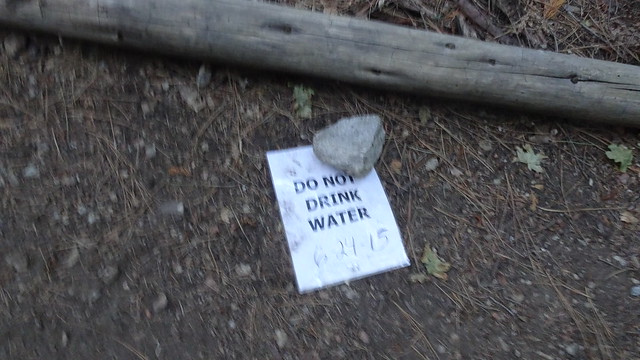 The trail made its way up and I passed several junctions. Thankfully they were well marked and listed which direction the PCT went. Sometimes I’ll come to a junction with a sign and there won’t be any indication of which direction to go. 9 times out for 10 it’s just keep going straight. Except the one time I don’t check the trail will make a turn. I came across a sign that had distances in kilometers. Apparently some freedom unit loving hikers don’t take kindly to the commie metric system. I found it a little funny. I passed the other hiker after a few miles. He was sitting on a rock taking his shoes and socks off. A little early for a break I thought but who am I to judge. 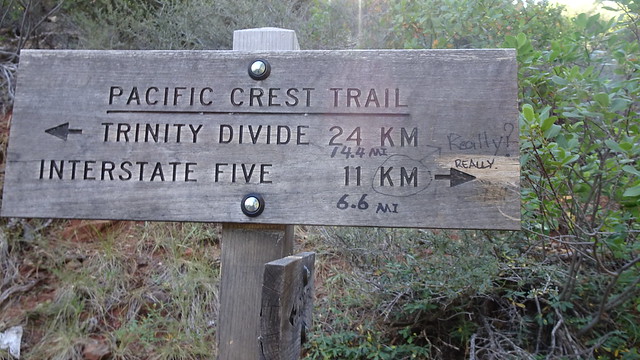 I made my way up up up. The trail rounded around a mountain and through the trees I could see I was just below Castle Crags. Would be neat of the trail went up on top of the crags but I knew it wouldn’t. Oh well. 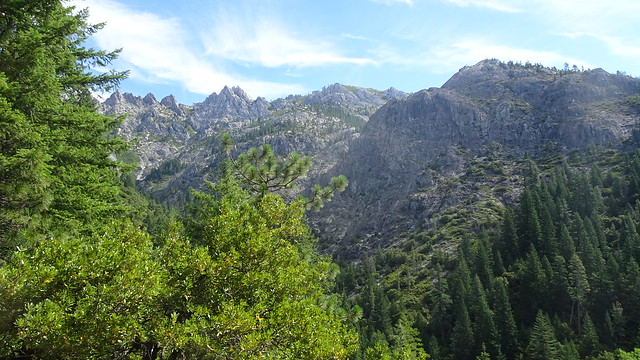 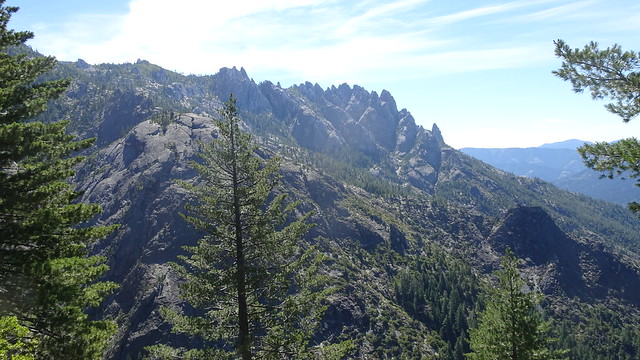 The trail switchbacked up and the trees started to thin out. The sun was being brutal today. My watch showed 95 when I was in the sun for extended periods. So hot. Around 10:45 I found a shaded spot and took a snack break. At the end of my quick 15 minute break I checked my watch and it showed 80°. The shade is much cooler! 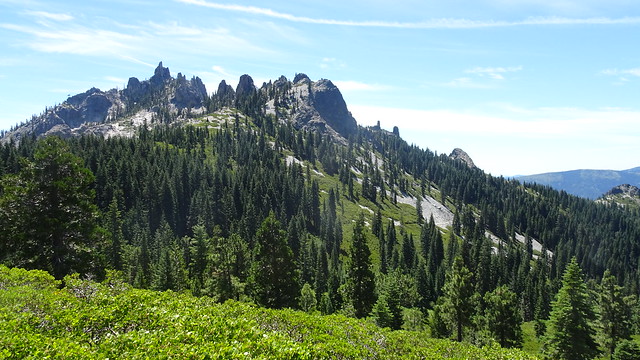 The trail continued up and I passed another hiker. The trail was completely exposed for almost a mile. I was sweating buckets. I came across a couple more hikers sitting and saw there was water. The water source seemed a mile early but it was decent and so I stopped to get some. I drank a liter on the spot and then filled up 3 liters. I was showing it was almost 15 miles to the next source. I felt 3 liters was a bit much but I was nervous on the accuracy of th e water report so I decided to be cautious and lug the extra weight up the never ending uphill climb.
The trail was a bit overgrown right after the water. That is always fun. Especially since we are in rattlesnake country again and people keep mentioning poison oak. I haven’t seen any lately although I’m pretty sure I’m still resistant to it. I’ve brushed past it a couple times so far and so far no reactions. I’ll still avoid it if I see it though. 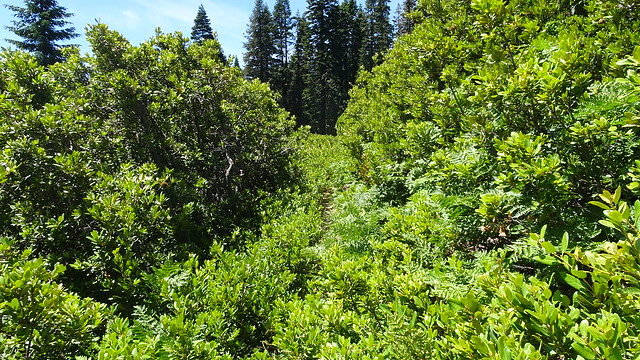 The trail climbed forever. A slow and exposed climb. It also got pretty rocky for a few miles while going over a pass.  Eventually I got high enough and around the mountain I was on to see Shasta pop out. Still amazed by how massive the mountain is. 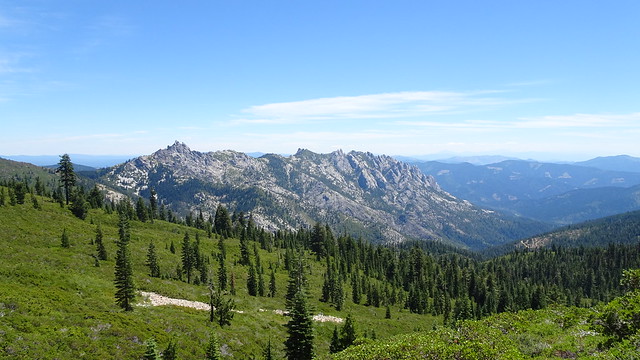 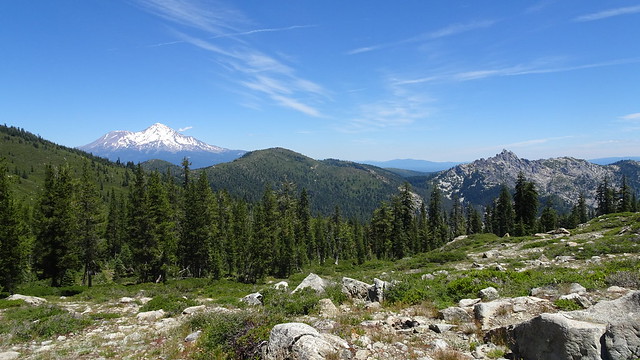 Not to repeat myself too much and bore you all but I basically went uphill. I kept walking and going uphill. Sometimes the trail would drop a couple hundred feet so that I could do some more uphill. Eventually I came across a spring and I filled up while being swarmed by giant fuzzy bees. I mostly ignore them but they were huge and we’re landing on my legs and walking around. 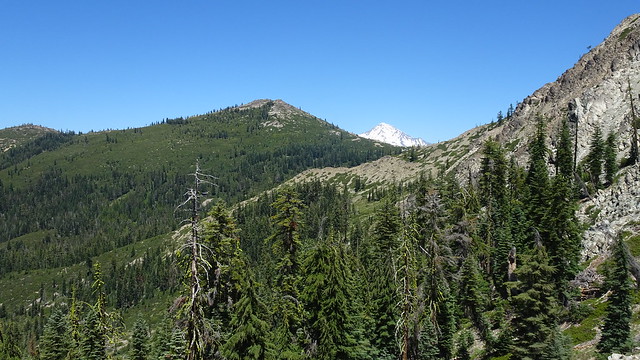 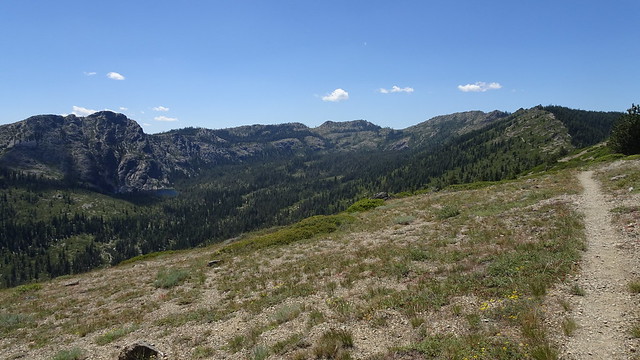 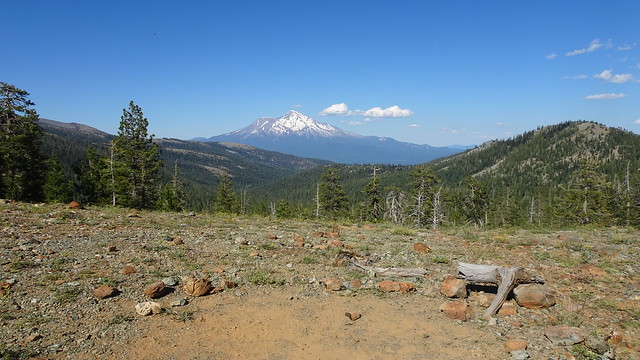 I grabbed my water and left. I only had two miles before the turnoff for Porcupine Lake. I thought I’d hit the junction by about 6 and when I checked where I was at 5:50 I saw I had passes it 0.2 miles back. What the heck! I didn’t see a sign or side trail. I backtracked and saw a small rocky side trail go up. I followed this trail for 0.2 miles and came to the lake and a couple spots t set up a tent. The spots were right in the sun so I set up and then took my food bag and sat in the shade to eat. I can see hundreds of bugs flying around but none of them are mosquitoes. After the sun set I jumped into my tent and laid down on my sleeping pad. It’s no bed that’s for sure. 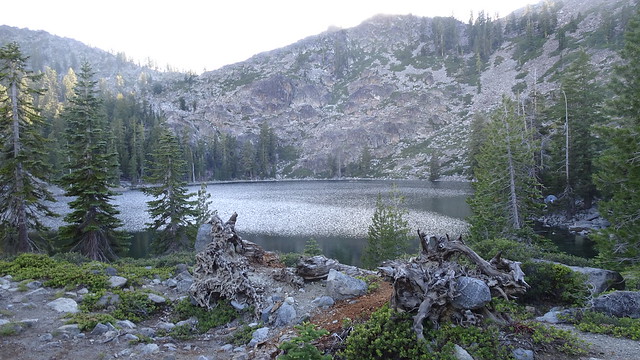 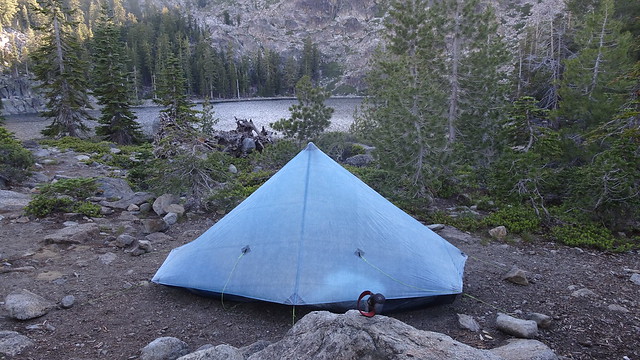