I’m amazed at how consistent my internal clock is. I never set an alarm and I usually am up just before 5, either on my own or by 5 Star rustling around. This morning was no different except I have no 5 Star alarm. Just my infallible internal clock. I decided to sleep in a bit more because why the he’ll not? It was still a bit dark and I didn’t want to have to get out my headlamp. I slept in until 5:20 and then quickly packed up my things. I shouldered my pack, crossed the creek, and made my way up the tree covered trail munching on my pop tart. I think I’ll never eat a pop tart again after this.
The trail was more of the same. Tree covered, bushes and plants everywhere trying to cut up my legs, smack me in the face, and rip out my head phones. There were a couple 10 mile waterless stretches so I had to plan and lay attention. I came across a trailhead area with a pit toilet that I smelled before I saw it. There were a few people camped near it. Gross. The trailhead is right next to the McLeod River. There can be only one. I felt the quickening. 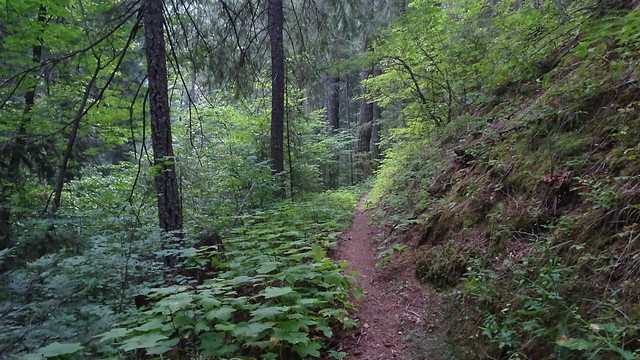 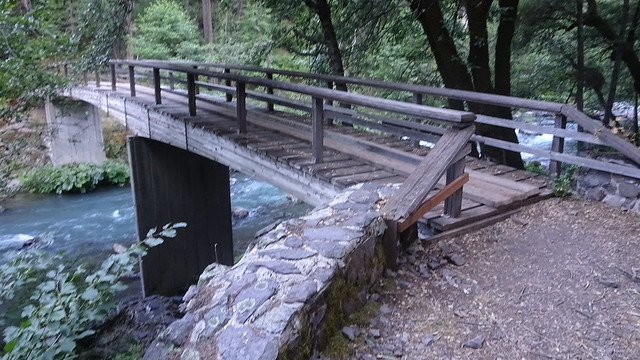 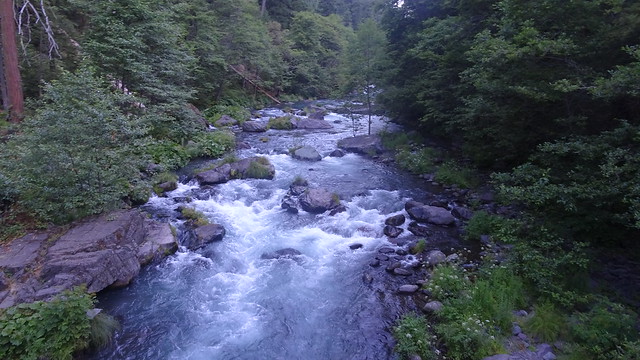 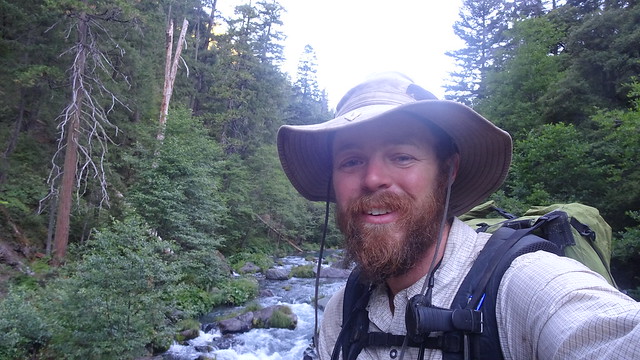 The river was rushing pretty good and I still had two liters so I skipped it for the next water source in a few miles at Fitzhugh Gulch. I got my water and pounded trail. Not much to see since I was under thick trees and in a canyon of sorts. It was making it hard for my tracker to send out location pings apparently. I had about a 1,600 foot climb over a few miles and decided to listen to music to help power my way up. Normally I put it on shuffle but I decided to go in alphabetical order and see how far I could get. 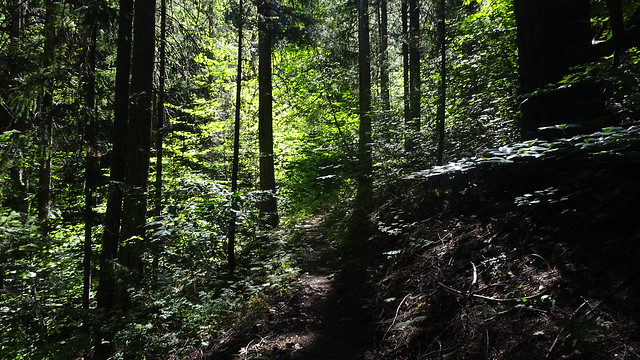 Several miles later I came up to Trough Creek and sat down to check if this is the source I wanted. Lot of butterflys hanging out too. I turned off airplane mode and had a few bars of 1X. I saw I wanted to go a few more miles to Squaw valley where there was a bridge and I could possibly stop for lunch. As I was putting my phone back into power saving mode and off airplane I got some texts. One from 5 Star. He is off trail now. He said 3 months away from his family was enough and needed to be home. I was not expecting that. It took me by surprise.  For some reason this made me sad knowing my friend wasn’t going to finish even though I knew I wouldn’t see him the rest of the trip. Soon he’ll be home on his couch chocolate milk in one hand and cheetos in the other with his family. I envy him for that. 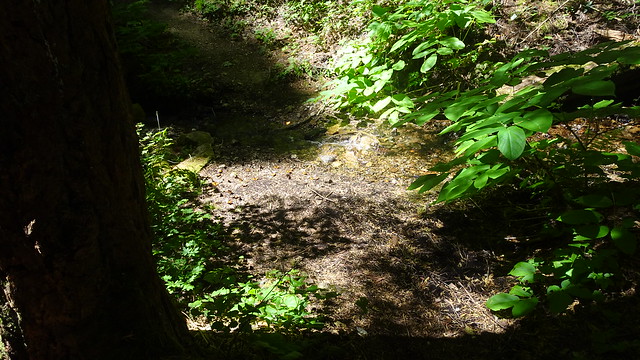 As I got close to the bridge I checked and saw I had 3G. Which was surprising since I was in the middle of a canyon. Not sure how the signal could reach me. Not to complain I called my mom and talked to her for awhile. I got up and made my way to bridge wondering how long the signal would last. I got to the other side and started making my way down to the water when the signal cut out. Oh well. It’s always nice to talk on the phone for 20 minutes or so. Definitely helps with the home sickness. 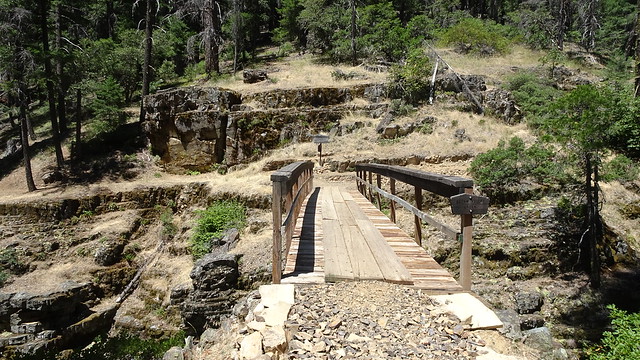 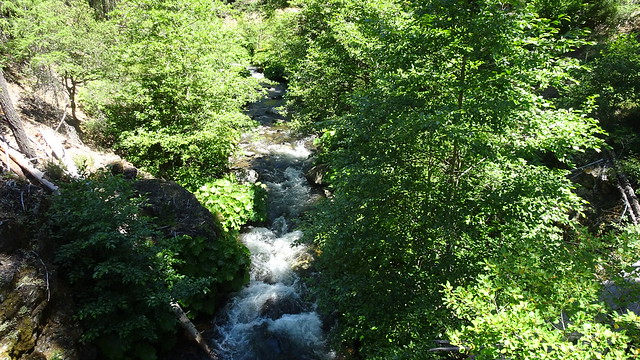 The path down to the creek was rough and rocky. I was hoping for a place in the shade to take a break to eat lunch and filter but there was nothing. So I just sat in the giant pile of rocks in the shade. Found the flattest rock and planted myself down. I ate some of my disgusting food and then filtered water. Another hiker came by and I talked to him while filtering. He said I passed him yesterday while he was off taking care of business. I definitely didn’t see him or anyone yesterday!
I got up and made my way back up the trail. I had a 2,000 foot climb over a few miles. Luckily I was in the shade but so far there was no breeze. Here I go! I was well into the “C”s of my music. Although I was confused since it played 3 Colin Hays songs in a row and the title of the songs did not start with “C.” Apparently I didn’t fix the title of the song and it had his name in the title spot also.

The first 1,000 feet was somewhat steep. I was pretty tired and even though I was in the shade I was sweating like a pig. About 2 miles in in came to the first of three tent spots where the trail levels out for about a mile and a half. I sit down to have a quick break and eat something but I get visited by some old friends, mosquitoes. I’ve been hesitant to mention  it in fear of jinxing myself but the last week has been suspiciously quiet on the mosquito front. I was hoping they had their not short enough life but it seems I may be in for round two now.

I sit for a couple minutes before getting up and continuing on. I get to where the trail begins another 1,000 foot climb but it’s nowhere near as steep. On my way up I see a sign on a tree, “The Octopus.” Alright then. Not sure what that means. I look around and see nothing tentacly. Thoroughly confused I hike on. 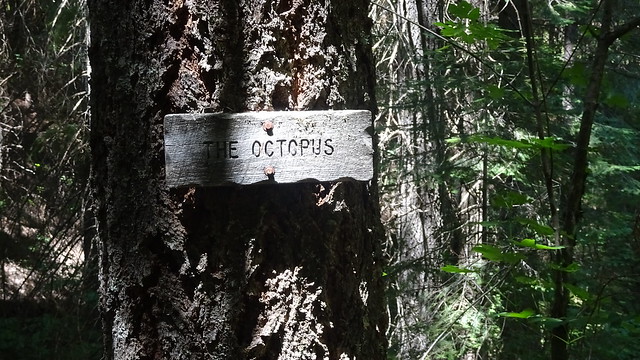 I get to the top and break out of the green tunnel and once again see massive Shasta towering. 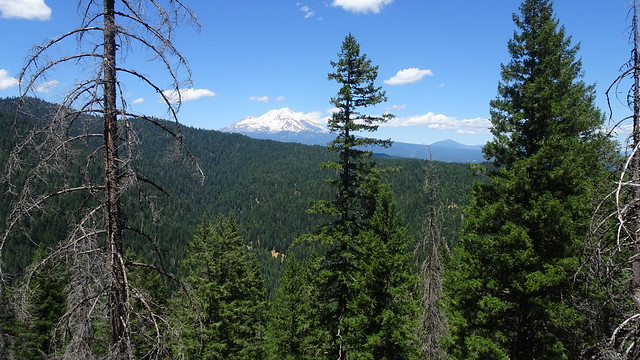 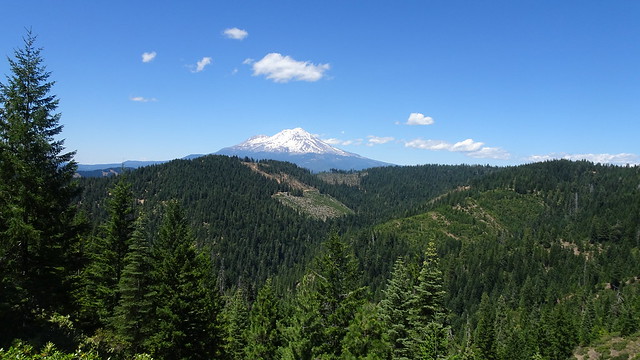 The trail follows along the side of the mountain and I can see Castle Crags in the distance. A pretty interesting rock formation. For some reason this gives me a flashback to 15 years ago in my digital photography class in high school. We had  those CRT iMac computers, a G3 I think. Embedded in these computers and network drive all over the place where copies of this racing game called Cro Mag Rally. My friend Jermyn and I were able to do all of our work for the semester in the first couple weeks so we messed around on the computers. We found this game and would play it. Our teacher would see and uninstall the game. Then we would just go find another place it was copied and play again. We also made “movies” about how the other’s sucks or in Jeremy’s opinion of mine “blows dogs for quarters.” That was fun to think of to take my mind off hiking for awhile. In case you’re wondering 30 year old Jason and Jeremy are exactly the same as our 15 year old selves when we are together. Also, his wife is the third wheel which she knows and accepts. 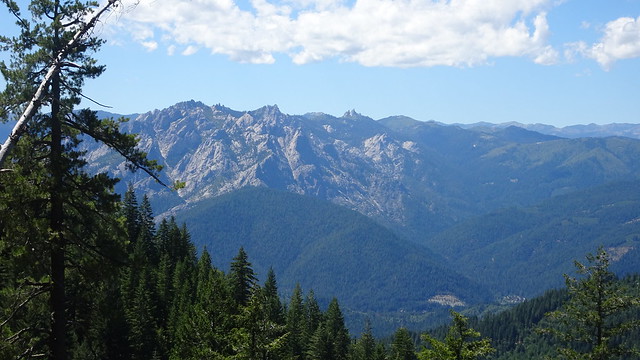 Eventually the trail started to make its way downhill. But in a stupid way. Instead of just switchbacks it went all the way around this mountain then dropped a 50 feet or so before coming all the way back. It was about a mile and a half of going off out of the way instead of a small switchback. Even my mom commented on it and sent me a text with my tracker.
I also got a text from my long lost desert hiking friend Tami. She is going to jump up to the I5 on Sunday and was hoping I’d be around there. Unfortunately I will be leaving there on Friday morning.  Hopefully she can somehow catch up to me. It would be nice to catch up and hike with her.

I finally got to where I wanted to stop for the night, about 4.5 miles from the interstate. I set up my tent and got in. I can’t wait for town tomorrow. Ready to sleep in an actual bed! 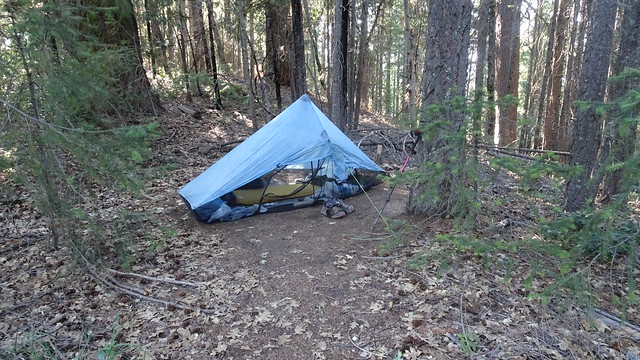