As I was just starting to drift off last night the wind picked up suddenly. I was in a large cluster of trees so my tent was mostly protected. I then heard what sounded like a few drops of rain on my tent. I looked up and saw the drops through the thin material. I unrolled my storm doors and hooked them in place. I rearranged my things in the tent to prepare for rain. Luckily none came. Although around midnight I heard something stomping around on the dead leaves just in front of my tent. I couldn’t see since my storm doors were out so I smacked my tent and heard whatever it was run off. Probably just deer.
At 5:30 5 Star and I were back on the trail. Only about 10 miles till Burney Falls State Park. We plodded along the trail. Not much to see. I listened to my audio book and slowly fell behind as 5 Star finally warmed up and was moving faster.

I was probably 50 feet behind him when I see him turn around and invert his poles into a “V” in front of him. Must be trail magic! I walk up and see a table with shade umbrellas! There are bananas, twinkies, corn nuts, and containers of cheese balls and pretzels. There is also a cooler of soda. Awesome. I grab a soda and eat a banana and twinkie. The twinkie is gross. I don’t remember them tasting so bad. I eat a few cheese balls and pretzels. The register asks for a joke when you sign. They also have wooden planks screwed onto the table and you can sign the table. It was pretty neat. I sign both and then continue on our way down the trail. 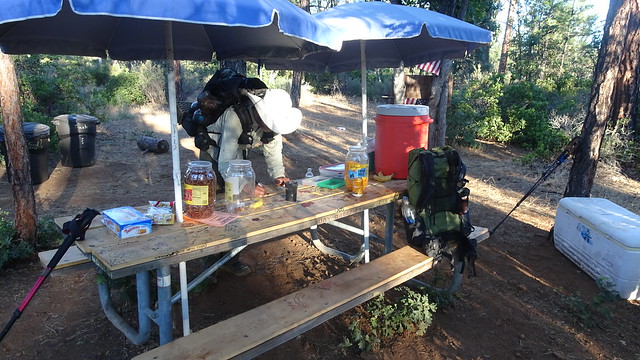 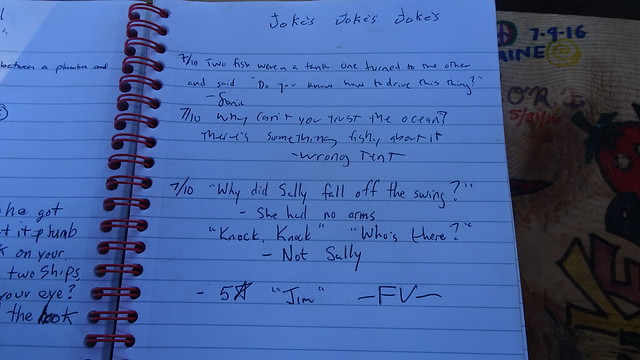 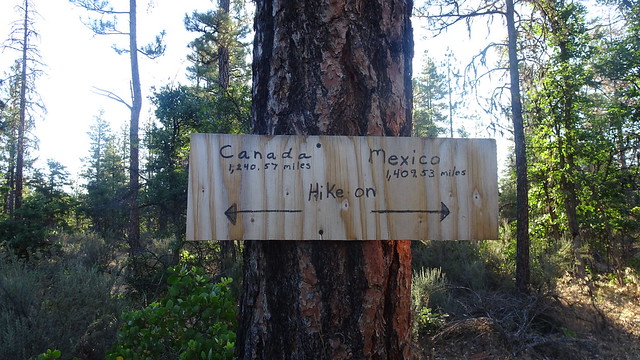 The trail went through tall yellow grass and dead burned up trees. We finally got a good view of Mt Shasta towering over everything. It really is pretty amazing how much it stands out. Yesterday it was blocked by clouds all day. 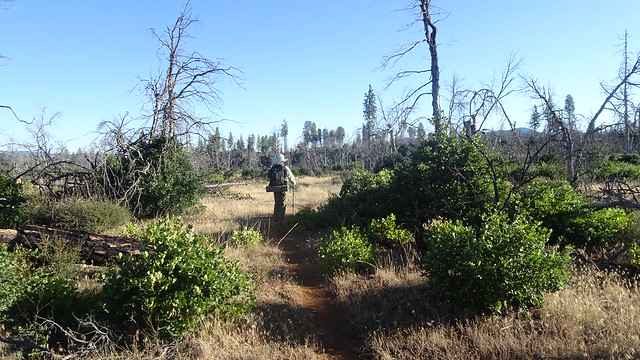 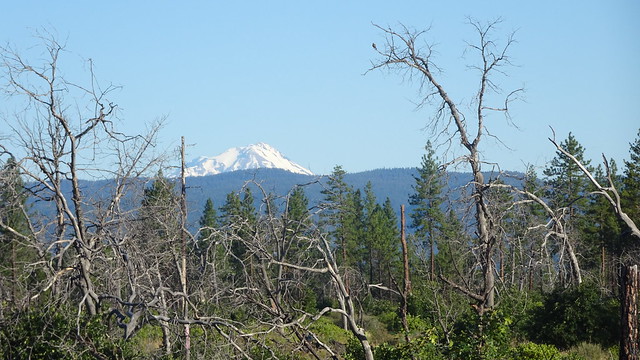 We got to a road that would take us to the park but just before it was a sign showing how far to Mexico and Canada. Only 1,233 to Canada! It’ll be over before I know it. Then what will I do? Go back to work sitting in an 8×8 cube? Guess I have to find a job first. 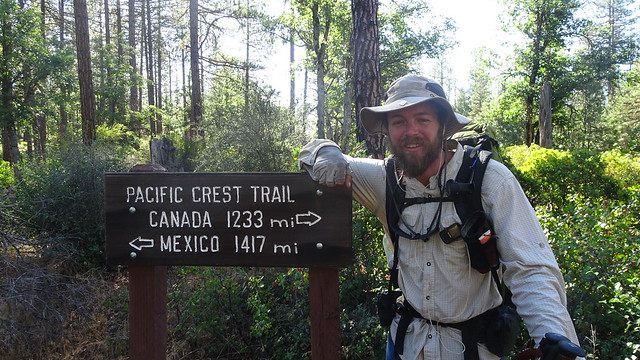 We walk into the park and there is a pavilion with a few other hikers sitting around the power outlets. They certainly bring us hikers together that’s for sure. I plug in my dead phone and tracker. Charge baby charge! 5 Star and I walk over to the general store to pick up our boxes and hopefully find some real food.

The lady working there definitely isn’t a fan of us hikers. She doesn’t say much and is very short with us. Maybe it’s the smell? She sends her helper to get our boxes and I wander around the store looking for food. I settle on a frozen bean and cheese burrito, a quart of chocolate milk, and a drumstick ice cream cone. I nuke the burro and carry everything back to the pavilion of electricity. I take a bite of my burrito expecting it to be simultaneously scalding hot and ice cold. I was not let down. Or I guess I was since my temperature assessment was correct.

I sort through my food although I probably could make it to Shasta in three days with what I still had from Drakesbad.  Oh well. I’ve given up on my dehydrated refried beans. They never seem appealing and it takes too much work. I have to put the beans in a container, add water, stir, wait, stir, wait some more, eat, and then rinse out the plastic container. Too much work! Another stoveless hiker agreed with me. I also tossed my Gatorade. Lately it has bee making my stomach upset too. Pepperoni and salami are right out as well. The thought of eating it makes me feel sick. I also can’t keep up with snickers bars. I have enough for one a day but I am snickered out.

After stuffing my food into my food bag and silently crying at the weight I sit by my phone and send out a couple updates. I want to do more on my phone but then it would take longer to charge so I put it back into ultra power saving mode.
I talk to a couple other hikers while I 5 Star sits through his food. He has so much! He got new shoes and a fancy new shirt. He looks like a fresh new hiker. No one will believe that he has walked over 1,400 miles. He finishes packing up his food and I see that look he has had the last week. Urgency. He packs up his pack and then grabs his bottles to go fill up at the water spigot. Not at a normal pace but a quick pace. I grab mine and follow after. We fill up and walk back. My phone is only at 80%. I know he isn’t going to want to wait another 10 or 15 minutes so I finish packing up.

We set off but stop by the Burney Falls overlook on our way. I wanted to go down to the base of the falls but 5 Star wanted to be on the trail. We walk through the park passing all the drive by tourists that smell of shampoo and perfumes. It’s a bit overwhelming. I can’t smell my stink or other hikers but I sure can smell civilized people. Especially girls. I can smell them before I see them 100 yards away. 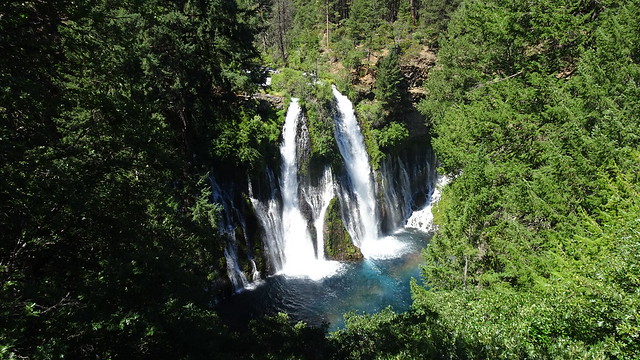 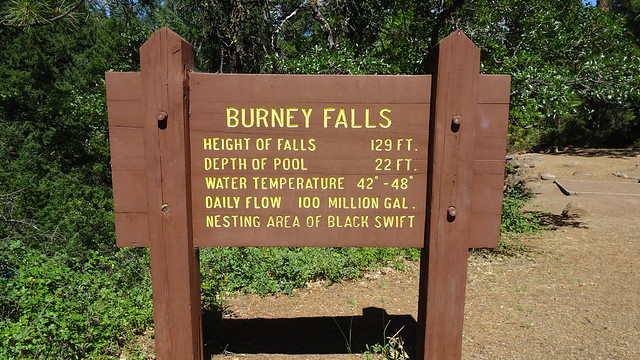 We get to the trail and leave the park. I wonder how far I have to go before I can safely stop to pee. I had a sneaking suspicion that since we are so close to tourists that when I stopped to pee that would be the moment a family with young kids would shoe up. I’d rather not be on any lists. 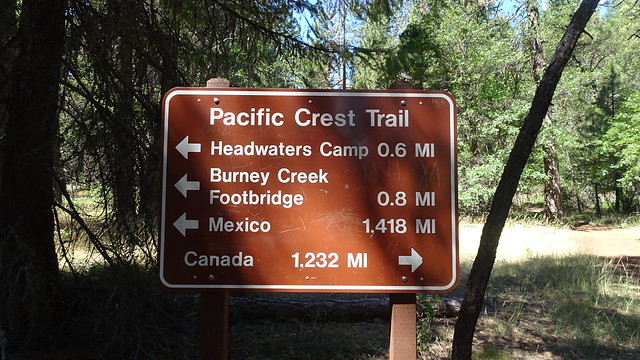 The trail starts to go up hill. It’s about a 2,200 foot climb back to 5,000 feet. We pass over a dam which was pretty neat. The trail continues up through dense trees and bushes. I start looking out for poison oak. 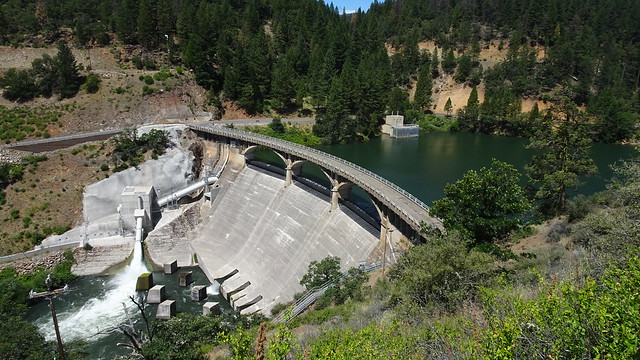 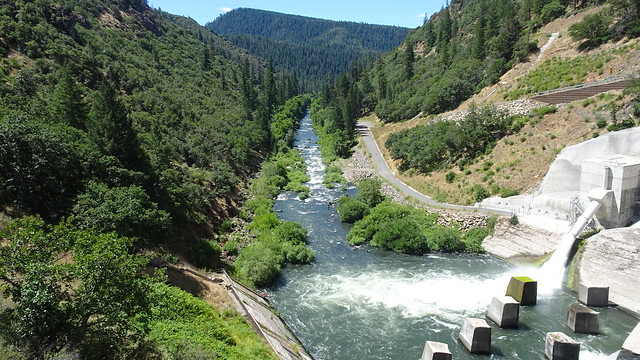 A couple hours later we stop under a bridge and get water. After getting water my feet start to hurt and I slow down. Eventually 5 Star is out of sight. I continue plodding along uphill at a decent pace but my feet hurt enough to slow me just enough. After a couple hours I see 5 Star come put of some bushes with his water bottle. I grab some water from an almost stagnant pool. There is a small flow but it definitely isn’t the best source I’ve seen since early in the desert. We cross a dirt road and sit in the shade. 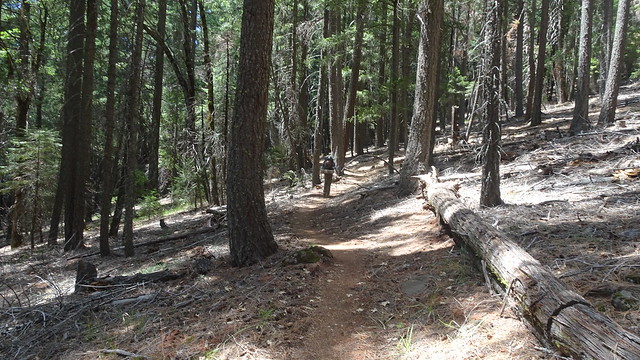 I tell 5 Star there is a tent site in 2 miles that looks out at Shasta and that is where I’m stopping. Back before Belden we had a discussion over parting ways. 5 Star wants to get home as soon as possible and so he’s been pushing all day and doesn’t want to stay long in towns. I want to finish quickly also but I want to enjoy towns and I am meeting a friend in Bend at mile 1,998. At the pace we are going I would be there a few days too early. I hate the expression “Hike your own hike.” It seems like a lot of people take it to the extreme to justify doing things against trail etiquette. However in this case it fits. 5 Star needs to hike how he wants to and I need to hike my way. One of us will eventually resent the other and that isn’t something I want to happen. I like him and hope to see him off trail in Montana.

We decided back in Belden that we would part ways at the road to Mt Shasta. I was going in to Shasta for a couple days and he would be going to Castella to pick up a package. I wanted to set up 8 miles or so from Shasta so I could make the most of my town NERO. He wanted to get to a camp ground next to Castella. 5 Star needed to go another 5 or 6 miles but I didn’t have to nor want to. So we decided that once we reached my campsite that we would part ways.

We climbed up the trail and after 2 miles reached an open rocky out cropping with Mt Shasta towering off in the distance. We said our good byes, agreed to keep each other updated, and then he was off. I walked down to a spot shaded near the edge and also blocked from the wind. I sat down and pulled out my food bag. That’s when I felt alone. I’ve hiked and camped with 5 Star since mile 109. I’ve hiked and camped with people I knew every day of the trail. What would I do at the end of the day now? I don’t have anyone to talk to. Did I make a mistake? Should I have sucked it up and kept up with him until I reached Bend in 570 miles? No, I thought. I need to do my own thing as lonely as I might be for awhile. 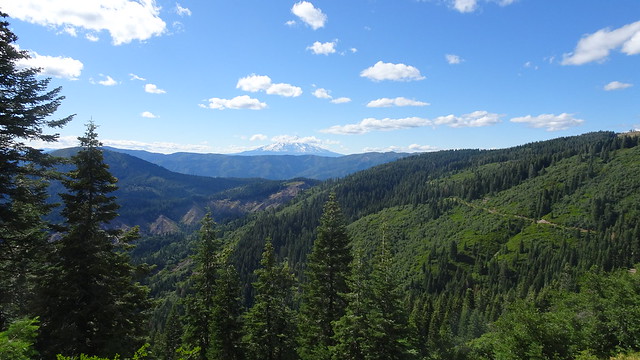 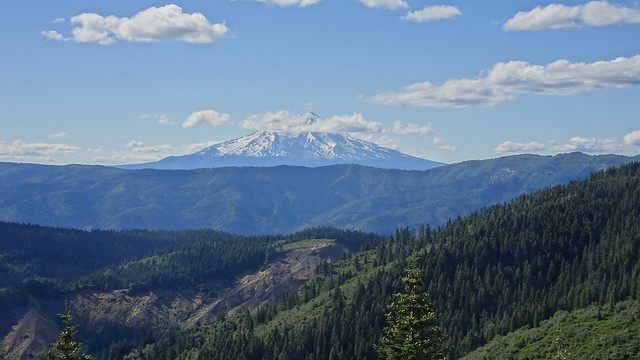 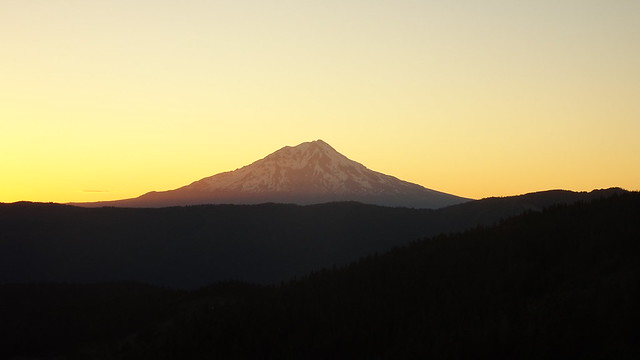 Day 79: Hat Creek Rim and the need of new feet