Today we got going a bit earlier than usual since we would be stopping in Sierra City to resupply. We were moving by 5:15 although I felt I was moving slow. My feet were a little sore from yesterday’s big day. Luckily the trail was mostly down hill to town. It also was in a dense forest which was nice but not much to see. 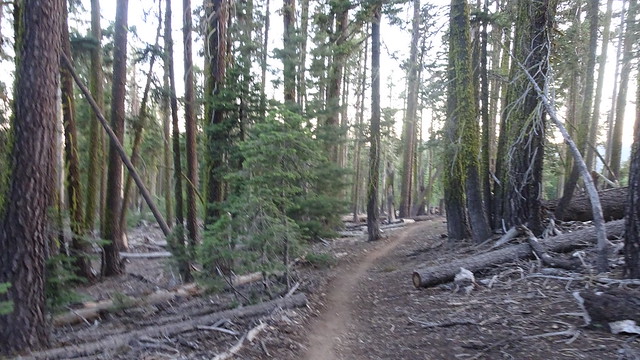 We dropped down to a road which went over a concrete and metal bridge. As we were walking on the road back to the trail I saw something on the PCT sign post. Oh look a note on a paper plate! As I get closer I see “Jason H.” Hey! I’m a Jason H!  Under that it said Wrong Tent. A note for me?! Awesome! 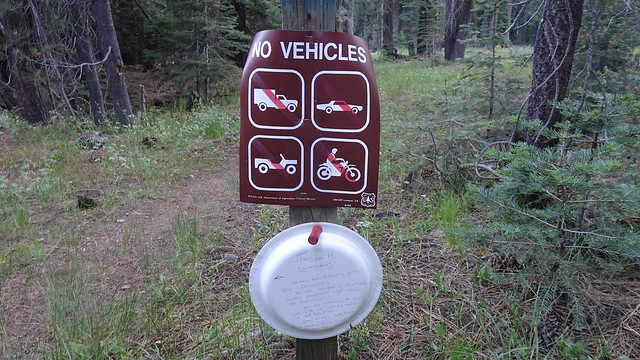 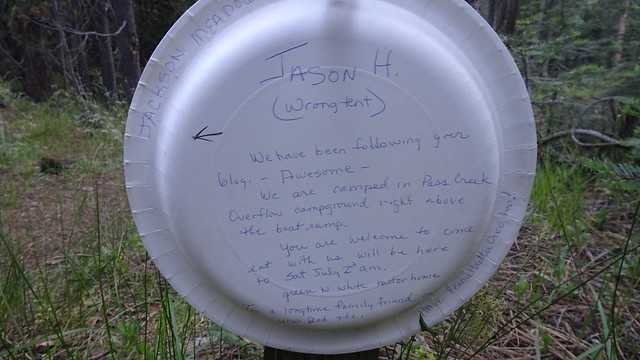 Unfortunately it was super early in the morning and I didn’t want to go waking people up begging for food. I really appreciate the offer!

We continued down the green tunnel of trees until we reach the side road to Sierra City. The road was a dirt service road that was gated off for awhile. Then we started passing by tons of car campers. People everywhere. Tents stacked on top of each other. We kept walking and made it past the Wild Plum camping area and into a residential area. The road names here are ridiculous. You can live on the corner of Wild Plum Rd and Wild Plum Ridge Rd. Not confusing at all. 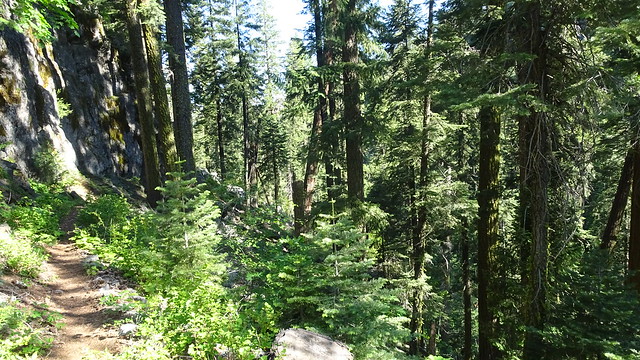 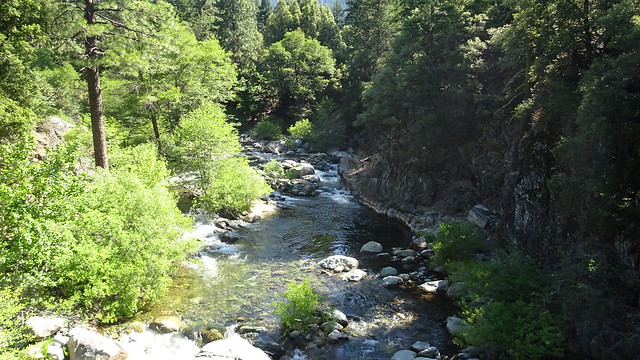 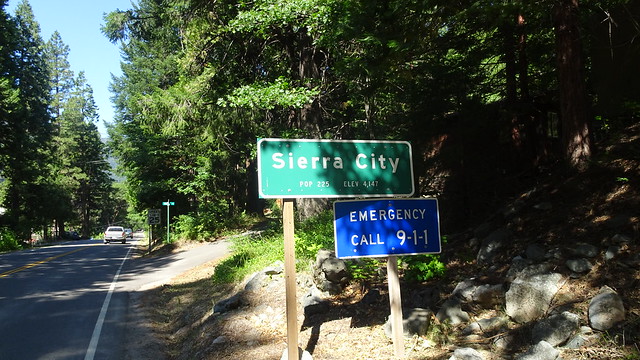 As we were passing by the homes on the way to the town center we passed a storage facility. Apparently the owners think they live in the state of Jefferson. The whole delusional state of Jeffersonis quite funny. I’ll be seeing more of this the further north I go. 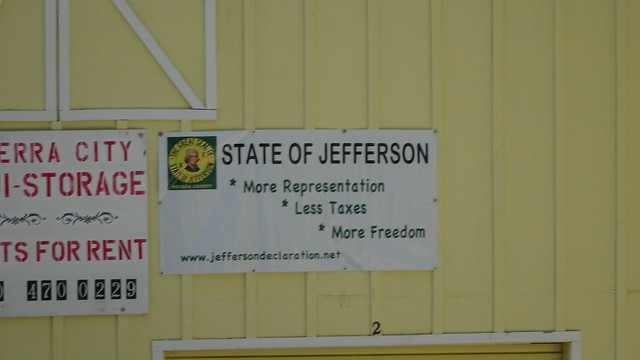 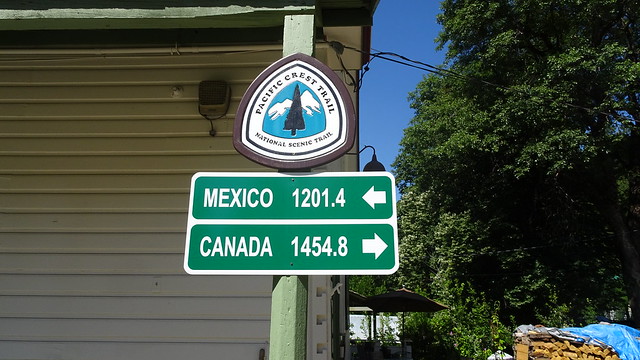 We finally got to the single road town and stopped at the Red Moose cafe. They were only serving breakfast so I got eggs, bacon, and french toast. It was so puny. I felt like I was ripped off. 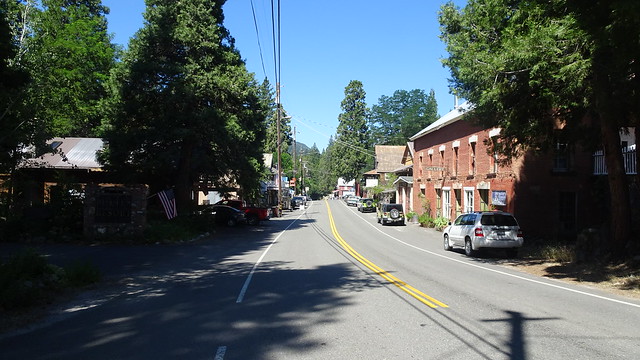 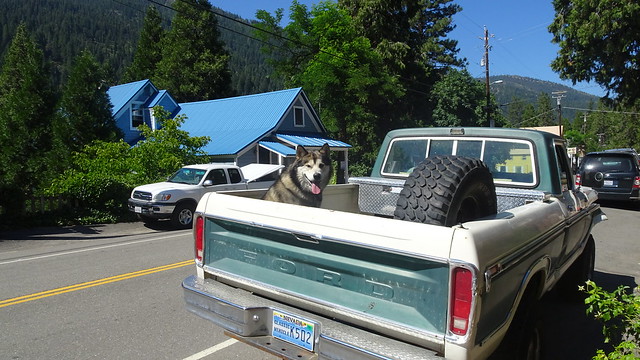 After my sad expensive breakfast we walked down to the store to pickup our resupply packages. There are hikers sitting out on the front porch crowded around a small electrical outlet. I walk into the tiny store and see they have a food counter. They have a 1 pound gut buster burger. Damn… should have came here first. I walk to the back of the store where the resupply boxes and grab mine.

I go back outside and sort through the food and take what I want to bring. I’m tired of some of the food and so I leave it in my box. 5 Star does the same and after the sorting the box is full of food for the hiker box.

I walk over and plug in my phone and then connect to the WiFi. I get my pictures uploaded and then send out a post. I walk back into the store and order a butterfinger milkshake. 5 Star tells me he is going up the street to the public bathroom. I get my milkshake and go back to my phone. The WiFi is completely clogged now. I finish my milkshake and grab my pack to head to the bathroom. The bathroom actually has a shower in it too. Free public shower! We are just getting ready to leave so I don’t get to take a freezing shower. We head off down the street back to the trail.

By this time it is around 1 and we have to climb about 3,000 feet. The first 1,000 feet wasn’t too bad since we were in the shade. It was still hot though. About 88° in the shade. Eventually after a few miles we break out of the trees and onto a ridge. At least there was the occasional breeze. The next couple hours were a brutal climb out in the sun. It was so hot. My shirt was drenched in sweat. 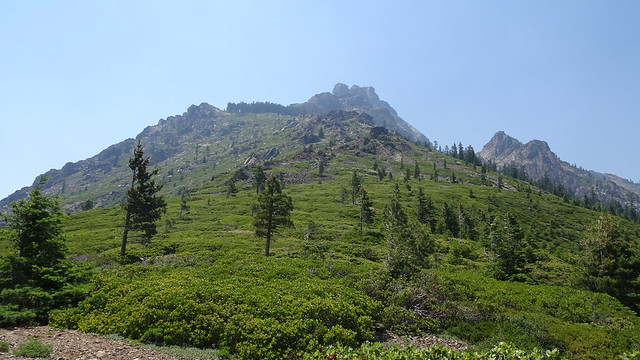 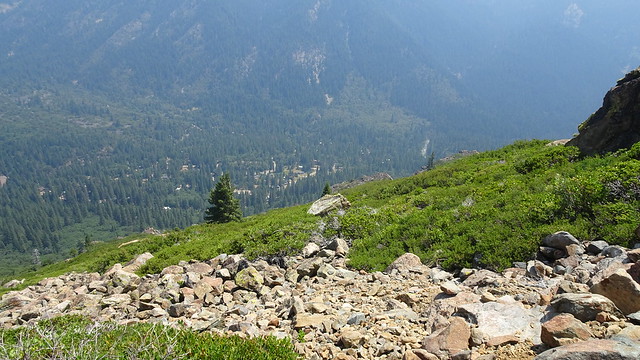 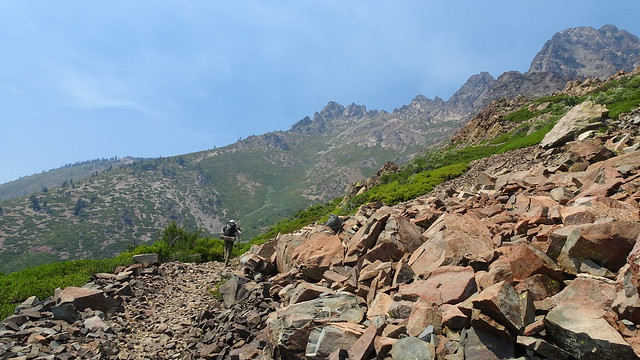 Finally we make it back into trees near the top. We sit down on the trail in some shade and take a break. There is a 4×4 road near us and trucks and jeeps keep passing by. We get up after 15 minutes and continue on. We finish reaching the top and see a bunch of people ahead. Day hikers. What the heck? What are day hikers doing up here? They are everywhere. We go for a couple more miles and come across a parking lot full of cars. Oh that’s where they came from. We walk through the parking lot and have a bit of a road walk before getting to another parking area before the trail.
We get back on the trail disappointed at the lack of trail magic. We walk for a mile and come across an old RV and a van. They are setting up tables and have coolers. A guy is crouching on the ground fiddling with something. He noticed us and asks how we are doing and if we want a beer. I ask if he has soda. He says he does and to come get one. We walk up and a large dog leashed to a line starts barking at us. I grab a coke and the guy introduces himself. “I’m Morgan and this is Morgan’s Diner. We will be making burgers later.” Uh… sold! Guess we are stopping here for the day. He introduces us to the other few people that are there and we sit down in some chairs. Morgan comes every 4th of July weekend and does trail magic.

They are just getting set up but next thing I know a table is set up in front of me with plums, nectarines, and cheeries. This is amazing. The girl that was with them made us hamburgers. Now when I say hamburgers I don’t mean your average hunk of dead animal. It was organic ground pork and beef. With fresh mozzarella, fresh picked that day basil, and pickled jalapeños. Holy crap was it the best burger ever. Just needed a fried egg. 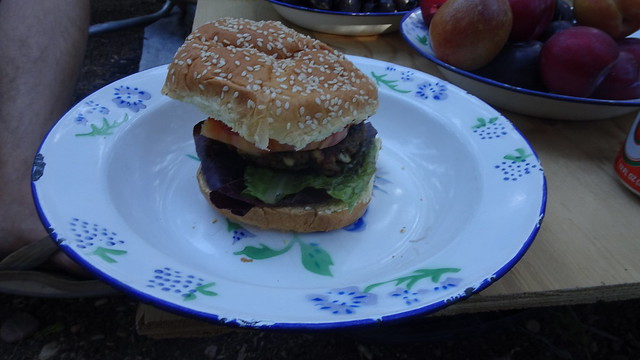 We sat around talking until late with a couple other hikers. It was so nice to just sit and socialize while drinking soda and eating fresh fruit. Ah… what a perfect ending to the day.

Day 73: Just another day on the trail