Day 36: Of mice and Snickers

6/13/16 – I’m alive! Sitting in the motel room. Hope you are all ready for the flood of posts to come over the next couple days!

Last night I tossed and turned once again from midnight until 5. The moon was especially bright since the tent wasn’t there to block it. At 5 I start packing up my things. Much easier when I don’t have to pack up my tent. I finish packing up and realize I’m missing a sun glove. The left one was in my pocket but the right is missing. I took them off when I was taking care of business yesterday. I went up and looked around the area but found nothing. I check my pack quickly but don’t see it.  It might be in my quilt but I’ll have to wait until I’m done for the day.

As I’m walking off Tea Time yells out he’s been attacked by mice in the night. They got two of his Snickers. Those dastardly fiends!

5 Star and I walk off leaving Tea Time to his mourning. The sun rise over the mountains was pretty spectacular. 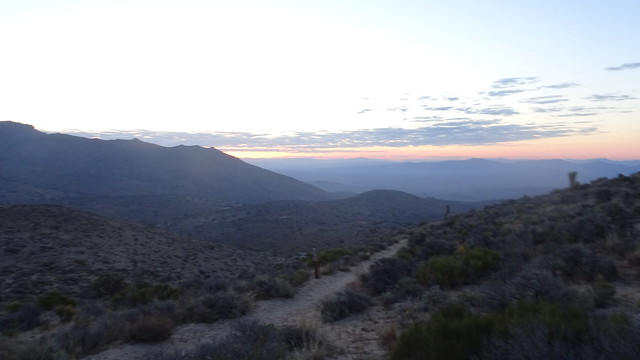 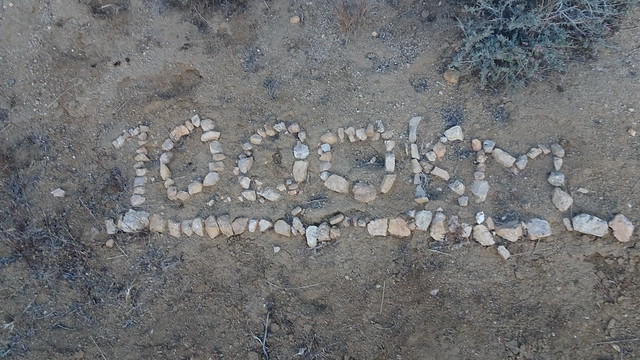 The early morning had us going down hill.  There was a water cache at a dirt road about 6 miles in for the day. The cache was right before a long steep climb. It was about 5 miles and 2,000 feet of climbing. Luckily it was cool and the sun was still low and parts of the trail were in the shade of the mountain. About halfway up we took a break on a switch back corner. I was drenched in sweat. My shirt has enough salt to make a salt lick. 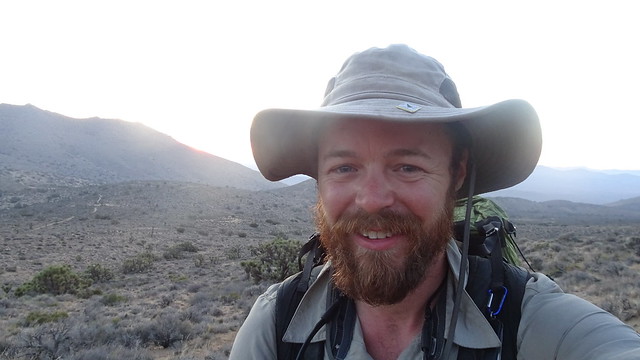 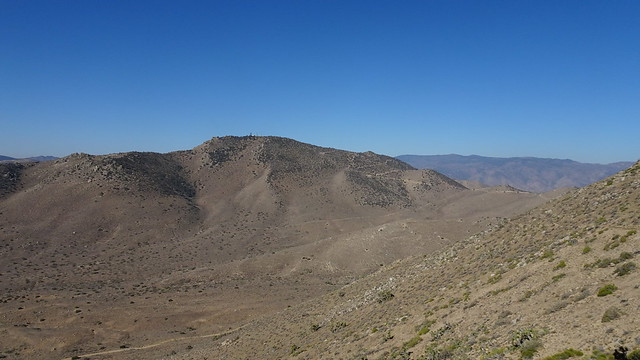 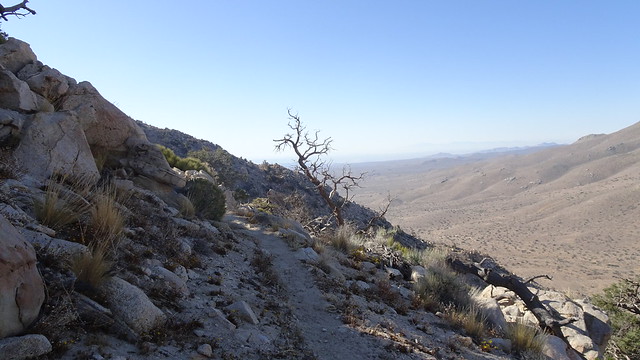 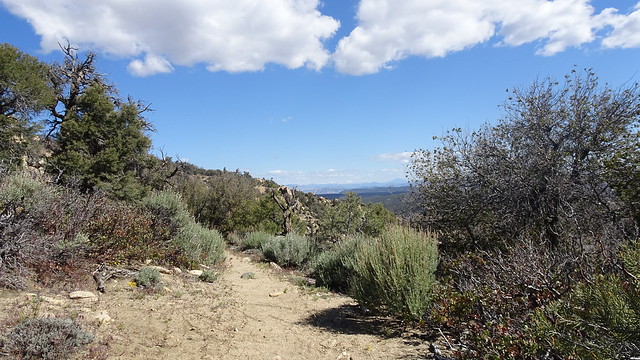 We finally reach the top and get a good look at the view on the other side.  What do we see? Snow capped mountains. The Sierra Nevada. Every step brings us closer to the most amazing place on earth. My mood instantly rises. I can’t wait to suffer in such beauty. 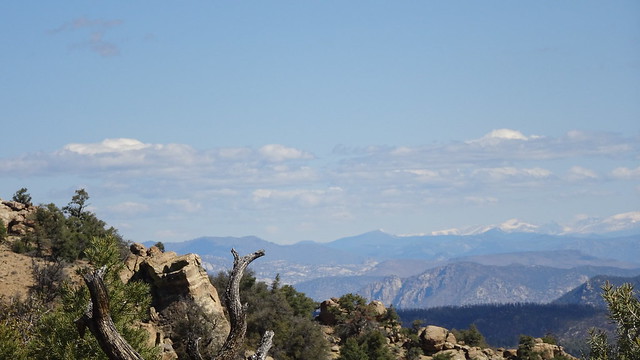 The terrain on the other side of the mountain also changes. The desert landscape slowly changes back to pine trees and wild flowers. Also the trail descends slowly. The day just keeps getting better. 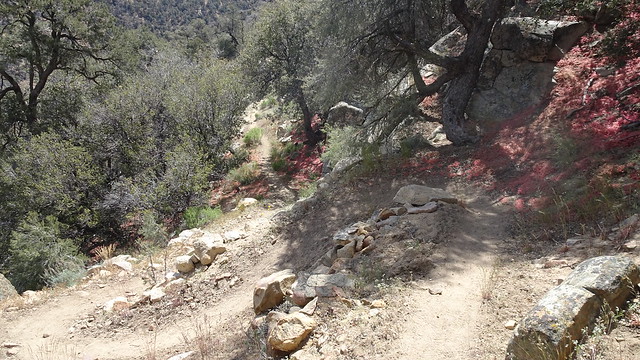 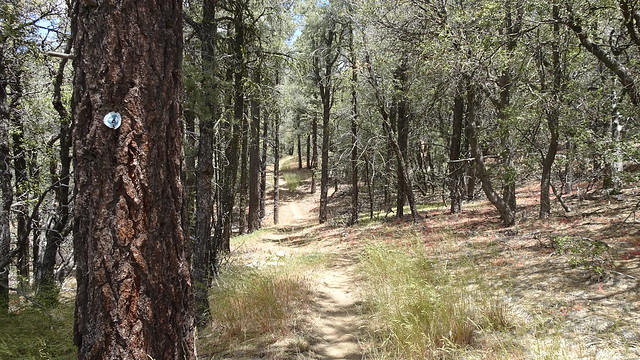 We cross another dirt road and sit on the wooden fence guard to keep motorized vehicles of the trail. 5 Star opens his hip belt and pulls out his snickers only to finf out a mouse had gotten to it last night. He left the pockets open just for that reason. The mouse had eaten a pretty good portion. Almost looked like someone took a big bite off the side.  Apparently mice like snickers. The funny thing is I had a snickers in my hip belt pocket and they left mine alone. Probably since I put my feet on top of my bag. They probably are revolted by my smelly hiker feet.

Around 11 we come across another water cache under a white tarp. 5 Star and I fill up our bottles and lay down next to the cache. A few minutes later Captain and crew show up. I tell Captain he won’t believe what’s under the tarp. He gets super excited thinking it might have a cooler of soda. He pulls back the tarp and it’s just water. The look of disappointment mixed with sadness is priceless. We all lay next to the water for an hour relaxing.

5 Star and I get up and tell the crew we’ll see them up the trail at this cabin. The cabin is only 7ish miles away and might have food and water provided by residents of Ridgecrest. The hike to the cabin is easy. The terrain is forest and we are on the shade most of the time. Eventually we come out to a dirt road that we have to walk on for a couple miles.  A few of those off road golf cart things pass us. 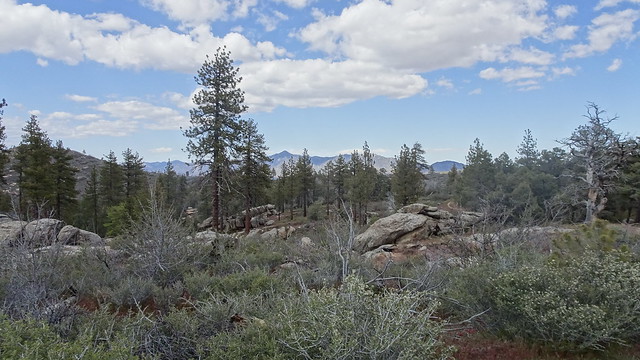 We get to the cabin and it’s kind of creepy. The inside is dark and musty. Is full of trash and empty water bottles. Dang… There is also an outhouse. Well I won’t turn that down. I walk up to it and see toilet paper every where leading up to it.  Gross. I open the door with a crescent moon cut out and step inside. The lid is up and it doesn’t even look like they put the outhouse over a “hole.” Oh well. You gotta go when you gotta go. Luckily I had lots of reading material in the way of people signing on the walls that they took a dump here and on what day.

I walk back out and 5 Star moved away from the murder cabin and is laying under a tree. I move my pack near him and may under the tree. He messes with his feet for a second and then lays back. Within a minute he is sound asleep. I’m envious. I start typing up today’s post but I’m not feeling it and close my eyes. I start getting restless and pack up my things. We decide to move on since the place is weird and it is a popular place for locals on the weekend and it’s Friday.

We take off down the trail again looking for a place to camp. After a couple miles I see a small place we could put up our tents. I ask 5 Star what he thinks and he shrugs. I ask him if he wants to be a manly man and go all the way to the walker pass campground where there is water. We have already gone 20 miles and it is another 7 to walker pass. He says sure and we set off at a brisk pace.

About 4 miles in I here 5 Star say something. I turn around and he is picking up a flip flop that fell off his pack. He turns arouns and asks if the other is still there. Nope. The other one is gone. 5 Star channels Reese Witherspoon and in a rage throws the flip flop off the side of the mountain. I laugh a little to myself and yell out “Reese Witherspoon!” We continue hiking and 5 Star admits he probably shouldn’t have done that. I don’t say anything.

We continue on and finally reach the campground. There are probably 8 hikers crowded around a table with stuff on it. I walk up and see water and boxes with stuff in it. I also see coolers. I walk over to the coolers and open them. Nothing.

One of the hikers I know said he got the last soda. Woe is me. There are Hostess donuts so I grab a few melted mini chocolate donuts and get chocolate all in my beard. We fill up our water and look for a place to set up our tents but it’s not very flat for a campground. We decide to cowboy camp next to another table.

We are sitting around doing nothing when a car pulls up. All of the hiker eyes widen. A hiker gets out and the driver gets out and says he has soda if anyone wants some. Immediately the hikers walk over to the car. I included. He opens up the back and I grab a orange soda and Dr pepper knock off for 5 Star and I. I tell 5 Star about how at my job there was a cubicle where we would put food and it was called “the shark tank” since as soon as the email went out we would swarm to the food.

We set up our sleeping arrangements and I, as usual, type up a storm while 5 Star passes out before the sun has finished setting. Once the sun has set it is instantly pitch black out since the moon has been rising so late. 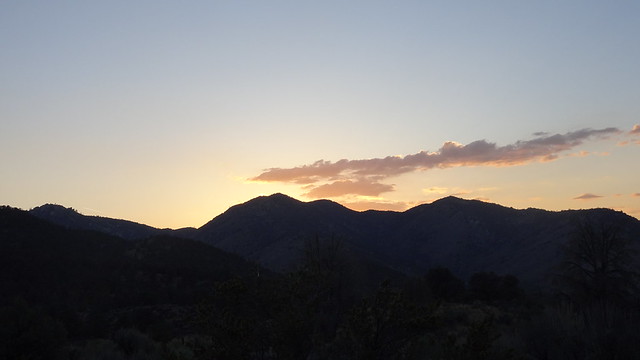 On 51ish miles to Kennedy Meadows! Unfortunately we didn’t get to say goodbye to Captain and crew. They are going into Ridgecrest tomorrow for a week. Most likely won’t get to see them again. The Hobbit better hurry up.

And now for some non hiking rambling on books.

I finished the 12th book of the Wheel of Time series. The original author, Robert Jordan, died before being able to release the last book. The last book was going to be huge,  about 3 times the size of a normal Wheel of Time book which is close to 1,000 pages. Jordan had notes and a detailed outline for the last book and asked his wife to find someone to finish it for him. After his death his wife contacted Brandon Sanderson. He had just wrote his amazing novel Mistborn and also wrote a blog post about how much Robert Jordan meant to him and how he is the reason Sanderson became a fantasy writer. Jordan’s wife obtained a copy of Mistborn and was so impressed she called up Sanderson and asked if he would be willing to finish a series that he had grown up reading and that influenced him so much. Once Sanderson started working on the book he quickly realized that there was to much martial for one book and with the agreement of Jordan’s wife and the publisher they split the book into three, for a total of 14 books in the Wheel of Time series. I couldn’t wait to get to the 12th book. Sanderson is an amazing author. Jordan created an incredible universe but I thought Sanderson could make it even better. His Mistborn series is amazing and has one of the most unique and original magical abilities. I highly recommend the series even if you are not a fan of fantasy. The 12th book was simply amazing. My favorite book so far. Jordan can be long winded and overly detailed while nothing of interest happens. Sanderson added his detail but also the intensity when events start to unfold. Sanderson is known for this. When major events in his novels start to occur it isn’t over quick. It goes on for a long time and it is a real page turner. You can’t put the book down. People have termed this “Sanderlanche” since when shit is going down it goes down it is an avalanche of intensity. Anyways if you are looking for a good series to occupy your time for awhile I suggest the Mistborn series by Brandon Sanderson and the Wheel of Time series by Robert Jordan.

Day 35: The cruelest of jokes

Day 37: Two milestones in one day