Last night was ridiculous. At around 11:30 pm some dude screamed pretty loud. Probably from a bad dream. A couple seconds later I hear murmuring and someone says “what’s going on?” A couple minutes later some asshat with his headlamp on started walking around the campground shining it into everyone’s tent.  He walks over to my tent, couches down in front of my opening, which I’ve left open, and shines his light right in my face.  “What are you doing?!” I annoyingly ask.  “Trying to find out who that was” he replies. He stands up and walks around for another couple minutes. I just don’t get it.  1. How the hell did he think he could figure out who yelled by waking everyone up by shining his light in everyone’s tent? 2. Why? Why even try? It was one hell, clearly someone who had a bad dream or was startled. Idiots. Idiots everywhere.

Also, one of my toenails fell off last night.  The second toe on my right foot.  That toe has been mangled from always seeming to kick rocks with that foot.

Today involved about a 5 mile road walk due to a trail closure that has been in effect for years to help protect the mountain yellow-legged frog.  5 Star and I got up and left camp by 5:40.  I was tempted to shout “you’re all a bunch of assholes” as I was leaving.  The 6.3 miles to the road walk along highway 2 was pretty standard.  There was a short 2 mile section that had about 1,200 feet of elevation climb.  That sucked. 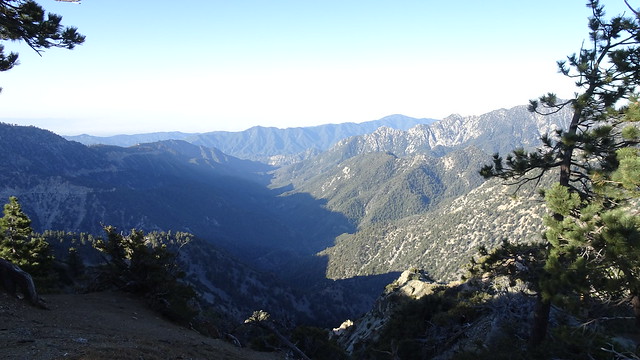 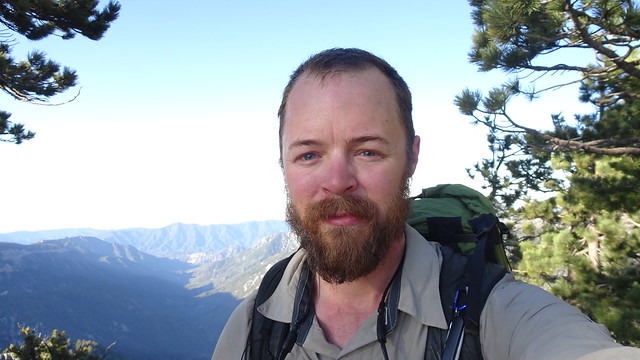 While coming down after the steep climb I saw a pin face down on the trail. I bent down to pick it up and it was a PCT pin! Even had the backing too! Awesome! I put the pin on my hat. It’s going to Canada. 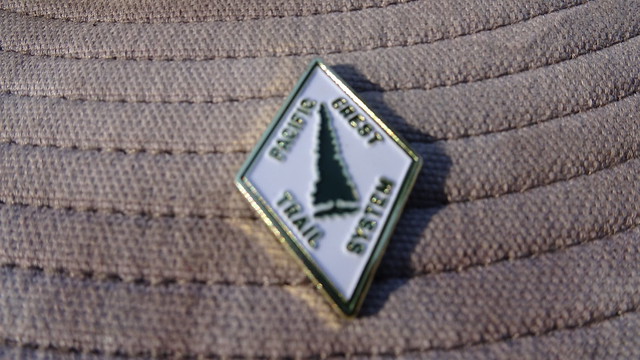 At 8:20 we made it to Eagles Roost day use area and took a break before heading out on our “dangerous” road walk.  The entire time while sitting at a table a bee kept flying around my head or landing on my pack. Stupid bee! 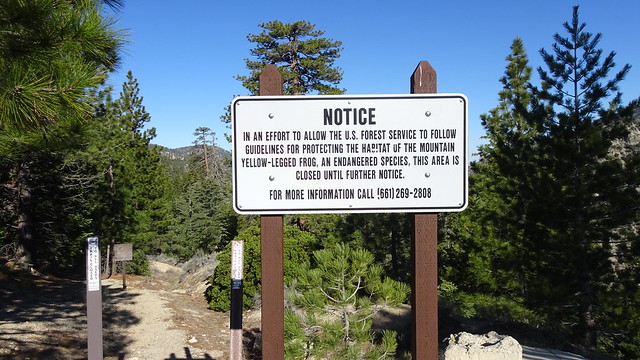 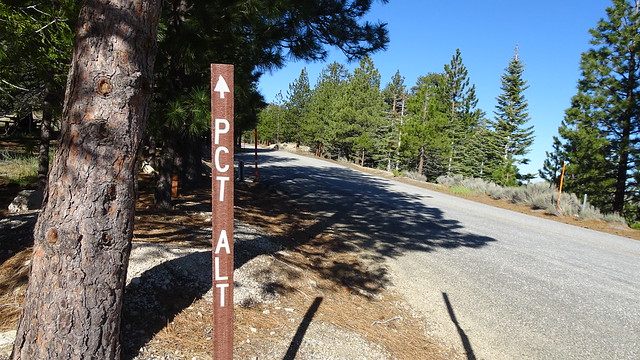 After about 25 minutes we get up and start our road walk up the “dangerous” highway 2. Not a single car passed us while we were resting. After about 2.0 miles I made the comment to 5 star that I would be surprised if a car passed us. 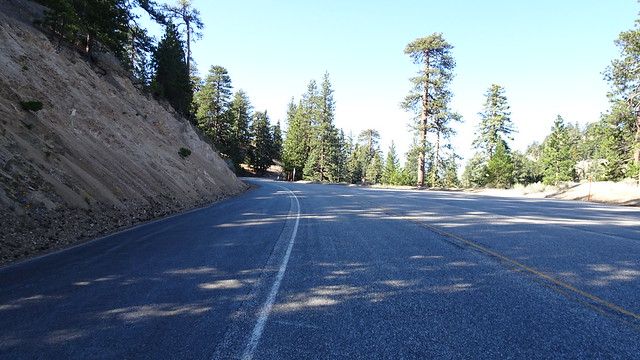 Of course less than a minute later a car passes by us. We were walking on the left side of the road going against traffic. The car that passed us was in the right lane.  5 star sarcastically says “I’ll surprised if we see a cooler of cold drinks before the end of this roadwalk.” Spoiler, there wasn’t any.

In total maybe 10 cars passed by, half in each direction. It really wasn’t dangerous. You can hear them coming and there is plenty of room to step aside.

After about an hour and 45 minutes of road walking we reach the PCT where it crosses highway 2. The trail crosses this road several times. We walk for a bit looking for a shaded and flattish spot to have an early lunch break. The best we could find was a wide spot on the trail that was in the shade.

I pull out my foam pad, take off my shoes and socks, and eat almost a pound of food. We get up and head for mile 400.

*Side note: my phone keeps wanting to change mile to Mike. Then it suggests Tyson as the next word. 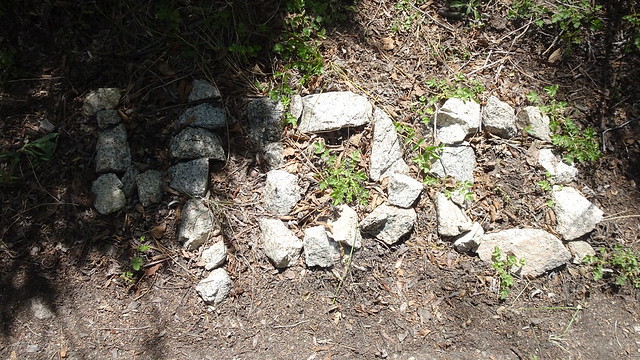 A few minutes later we get to 400.9 where there is water at Camp Glenwood. A dad camp I guess. Probably drink beer in peace and quiet away from the old lady and ball and chains. 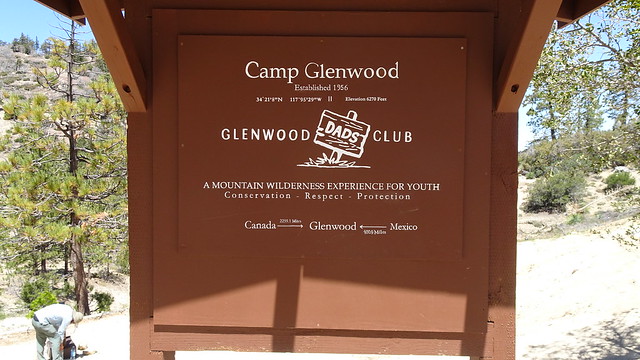 There is a spigot for water and sign saying “warning: water not safe for drinking.” Thanks, I’ll take the risk. Sitting in the shade of the building are some people we saw from yesterday. They are loud and obnoxious and one is constantly smoking every time I see him.  5 Star and I get our water, filter it, and leave quickly. 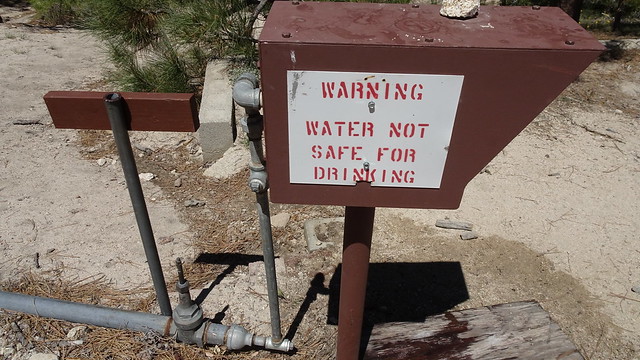 The rest of the day was fairly boring.  No expansive views.  Just hills of brown and shrubs. 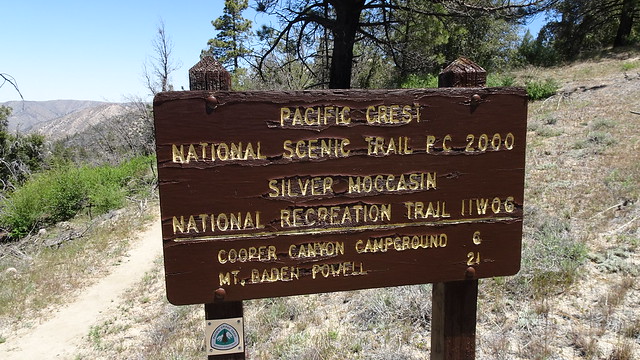 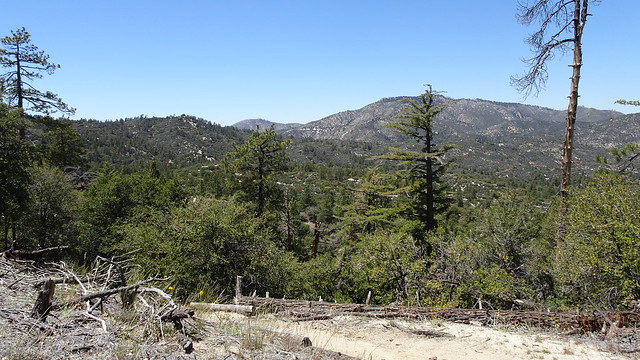 We came around the corner and it smelled like Marijuana. That means either two things. We’ve stumbled upon some stoners or Common Turricula aka Poodle Dog Brush. Poodle dog brush is a nasty plant. It is an invasive weed that spreads fast in burn areas. If contact is made with skin it has similar affects as poison oak.  Unfortunately, it spreads all over the trail and grows quickly.  For about 5 miles all I could smell was Marijuana. I constantly had to watch out for it so that my legs don’t brush against it. 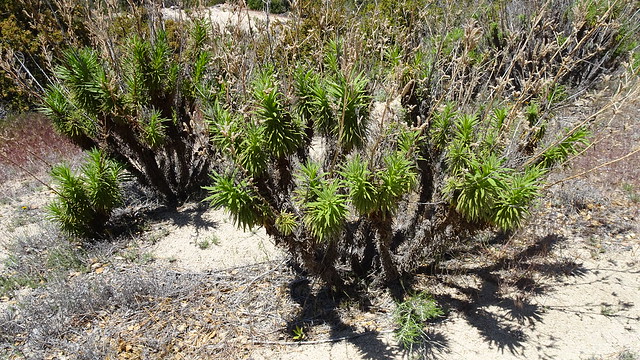 Around 2 5 Star and I hit a junction that leads to Sulphur Springs Campground. The junction is kinda strange and doesn’t mention the campground. It also seems as if the trail is the PCT but for horses. Very odd.  We walk down the trail and get to an old paved road. To the right we can barely see an outhouse and a stone structure for a piped spring.  We walk down the road and see some tables and hundreds of bugs flying around.  Great.

We drop off our packs and go to the spring. We full up a couple bottles and then pick up our packs and go across the creek to the other side of the grounds where it looked flatter and less buggy. The bugs looked like they might be lady bugs.

I walk back up the trail and write Justice and put an arrow of branches on the trail around 3:30.

We set up our tents and then sit and eat dinner. I get bothered again by bees. This time they are landing on my feet and hands. Stupid bees!

Time passes and no Hobbit.  Guess he missed my message or I didn’t put it up in time.  We are hoping he is only 5 miles ahead in another spot big enough for several tents.  We plan on getting up a bit earlier in hopes of catching him and telling him our plan for the next couple days till we get to Agua Dulce.  Worst case scenario we meet up there.

Tomorrow we are taking another alternate. This one is the Poodle Dog  Brush alt.  The PCT between 420 and 430 has had problems with the nasty plant. Reports say that it is better but you still have to look out for it.  No thanks, I’ll take the non rash generating trail.  Also, the alt goes by a water source where otherwise it would be a 26 mile carry from 418 to 444. Supposedly there is a campground with a water spigot at the end of the alt just before mile 430. We shall see but I’m still bringing 4 liters just in case.