Sorry, for the delay in posts. I haven’t had reliable service for a few days. Usually only while I’m hiking and I can’t stop to update since it is a bit of a process to get the pictures on here. It took a couple hours of limited service to get this day’s pictures uploaded. Unfortunately, the lack of service will continue and it’ll be days to possibly over a week once I’m in the Sierras. Rest assured dear readers that I will update as soon as I have enough service to upload my photos! Days 20 to 22 will be uploaded tomorrow when I get to the Acton KOA where I’ll be eating an extra lare pizza all by my self.

Del Taco was a terrible choice. Around 11 pm I woke up feeling pretty bad. I went into the bathroom and made what was left of Del Taco come back out. It just wasn’t sitting well in my stomach. I brushed my teeth and gargled but my throat hurt from the acidic ground beef that just came back out.  While laying in bad I had a genius idea. Chew up a couple tums and drink a little water and swallow slowly.  Worked perfectly.  Sometimes I amaze even myself.

After tasting my dinner a second time I fell back to sleep pretty quickly and woke up at around 5 and the three of us packed up our stuff.  5 Star and I planned on leaving at 5:30 and head to McDonald’s to get a breakfast sandwich to go.  The Hobbit planned on leaving at 6 and give the continental breakfast a run for Best Westerns money and head for the trail at 7.

5 Star and I walk down to the lobby at 5:40 to drop off some things in the hiker box and we see that the breakfast things are already set out. Score! I make a bagel, egg, and sausage sandwich, eat a danish, and drink some orange juice.  Feeling sufficiently full and ready for the extremely long climb of the day 5 Star and I heave our heavy packs on.  No water for 22 miles plus 5 days of food make our packs unbearably heavy. Going into towns with less than a liter of water and hardly any food left is so nice.  My pack probably was in the 12 to 13 pound range coming into Cajon pass.  Light as a feather. Today it felt like I was heaving a bag of cement onto my shoulders.

We make pretty good time on the mile road walk back to the trail and pass under the interstate at 6:15.  The trail picks up right at the interstate and you go under a long dark tunnel. Just waiting for some bath salt crazed transient to pop out and shank me. Can’t trust people who hang out under bridges.  Luckily there were no shankers, or at least none that I could see. It was pretty dark in the tunnel. 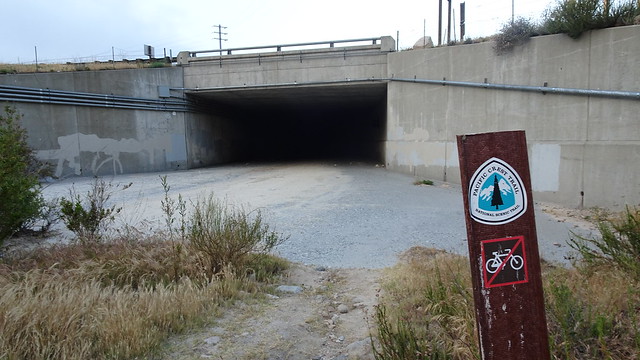 The first 6 miles were pretty easy.  Wasn’t very steep and it was overcast. Almost immediately after the interstate tunnel and and a few small switchbacks around a hill I came into view of the railroad tracks.  I see a train with 5 engines and at least 200 platforms snake its way slowly up and around the mountain. A few minutes later another one passes by. For most of the day I could hear trains running up the mountain. The platforms held double stacked shipping containers but the vast majority held semi truck trailers. I lose 5 Star around this time. He later tells me Del Taco jumped ahead of McDonald’s and needed to make a deposit on the trail. 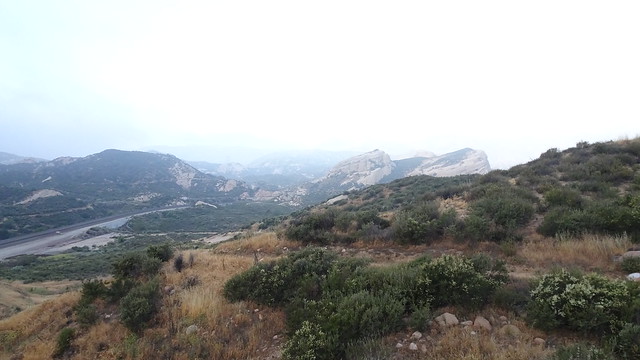 The trail passes through a small corrugated tunnel which was pretty neat.  It then climbed up and I had to cross over the train tracks. Don’t worry mom I looked both ways before taking a quick picture. 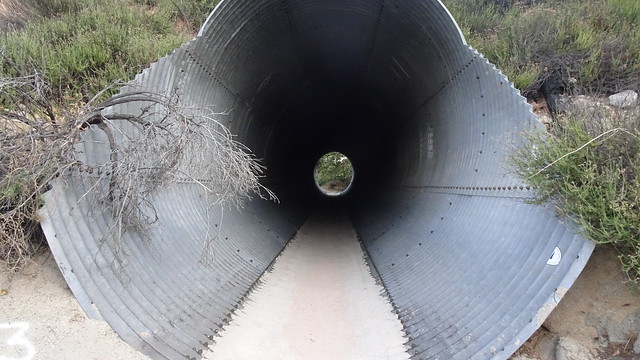 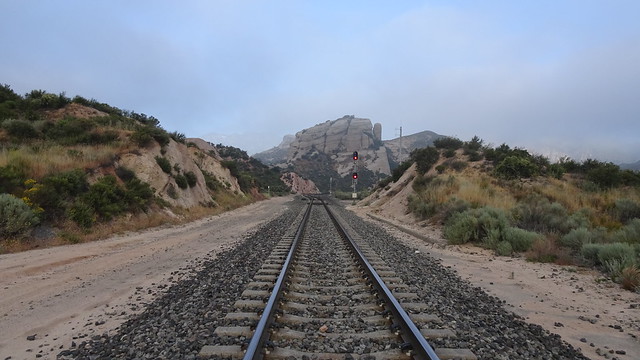 The trail snaked around a mountain before dropping down into a valley for fora short distance. In the valley was a water cache stocked by trail angels in the mountain village of Wrightwood. I signed the register even though I didn’t take any water.  I let everyone know gas station Del Tacos are a bad idea. 100 yards later was another register in a metal stand. I signed this one too saying I was hoping for overcast skies.  Jeff, who now is Ducky because he walks like a duck, signed yesterday and let everyone know McDonald’s gas was propelling him up the mountain. Which is funny since I’m always wondering what the thrust is of an average fart. If I fart 20 times on average while hiking per day what distance do I cover from my farts? Jeremy, figure this out for me. 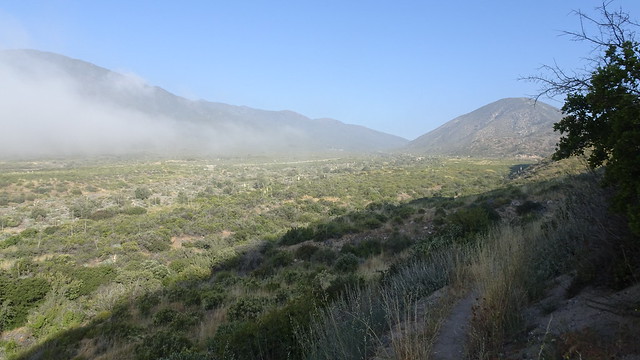 After the trail register it was basically uphill the rest of the day.  3,500 feet to about 8,400. The first few miles were OK since it was overcast and then eventually I was walking in the clouds. However, this was short lived and I was above the clouds by 9.  The temperature under the clouds was only supposed to get up to 68° but as the miles and hours wore on the temperature rose to around 81°. With no shade. It was brutally exhausting. 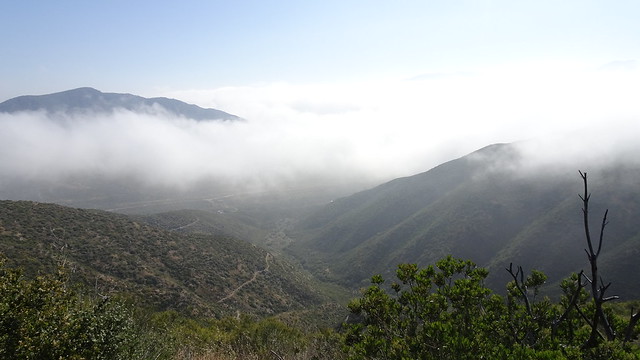 I did get to see a couple snakes on the lower part of the mountain. The first was a rattle snake. It was stretched out across the trail.  I got within 10 feet before I saw it.  It was about 2.5 feet and had a small rattle. I threw a few rocks at it and it did not react. I rolled a big rock which hit it in the middle and still nothing. I threw a few more aiming for the head until it decided it was pissed and decided to rattle at me and start making its way across the trail into the brush. All while keeping it’s head looking right at me.  I threw a few more rocks into the bush it went into for good measure before I ran past it.  The second one wasn’t a rattler and so I poked it with my trekking poles before flipping it off the trail and into a bush. It slithered on down the path. 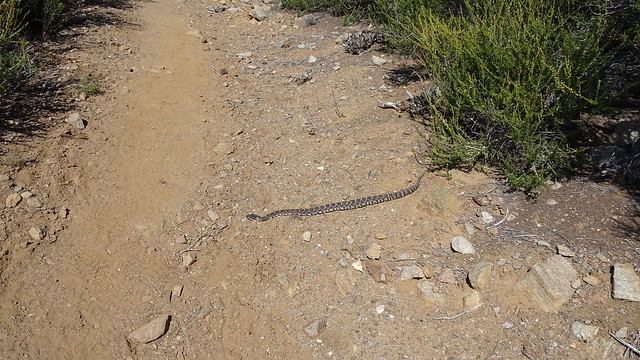 By 11 I was moving slowly.  My feet hurt, my Achilles were sore, and it was very hot. With no shade or flat place to rest. I listened to my audio book but all I could think about was how hot and sweaty I was and that I would definitely have some wicked butt chaffe later.  I turn around and see that 5 Star was right behind me. I was in my own world of uphill slogging that I didn’t hear him come up.  We talk for a few and both agree to stop the first chance we get shade. I let him go ahead of me since I’m dragging my feet. We find a small shaded place on the trail but it isn’t flat at all. We sit on the sloped embankment and I eat some muddy buddies, chocolate chip Keebler cookies, and a bar. Taking the pack off and sitting in the shade letting the breeze dry my sweat soaked shirt felt amazing. We sit for about 30 minutes and  comment on where the Hobbit was. He usually would have passed us by now, especially after a long break.  We get up and continue on up the seemingly neverending mountain. 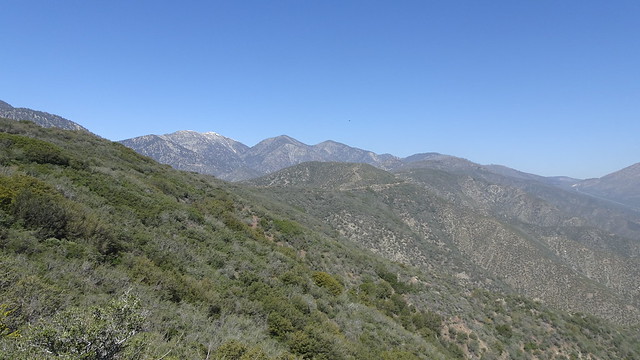 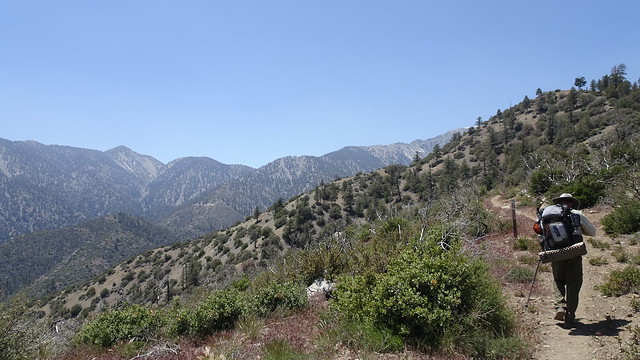 For the first part of the climb the trail switch backed up on the eastern side and headed a bit north.  At around 6,000 feet pine trees would appear every so often. The trail looked like it was about to skirt around and start heading west and I told 5 Star I could feel that there was a pine forest waiting to shade us on that side.  We finally turn the corner and it’s a burn area. I was kinda right… dang. 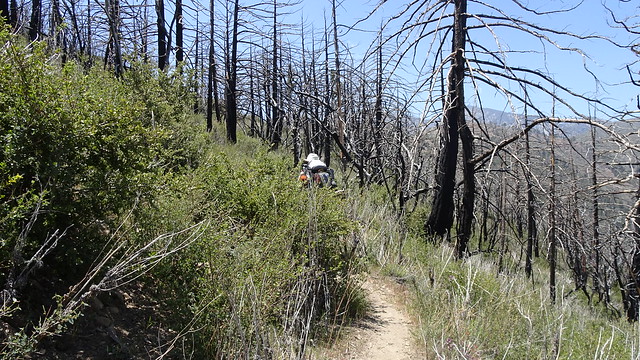 We hike on for a couple more hours until we come across another shaded area.  This time we had a bit more room and it wasn’t as steep but still on a slope. We sit for a while and keep looking down the trail expecting a hobbit to appear.  A few people we’ve been leap frogging with all day pass but no Hobbit.  I hoped he was OK. He must be having a crappy day like us. 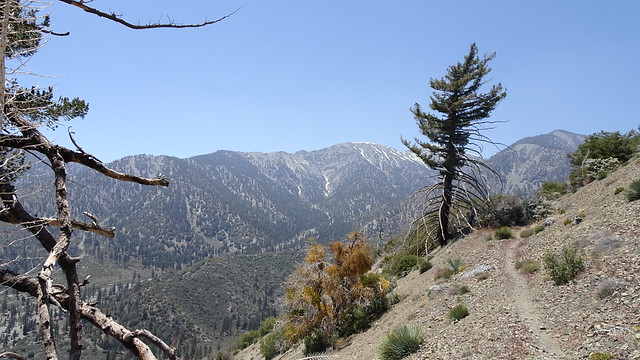 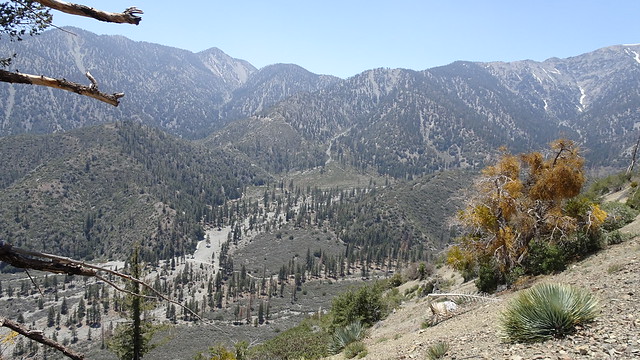 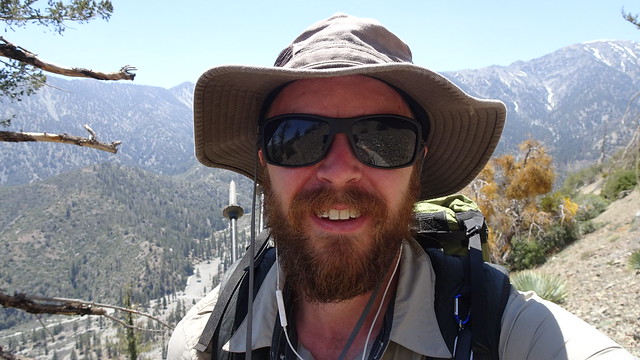 Don’t let the smile fool you

Finally the trees get bigger and more dense as we continue to climb.  We get over a false summit and are able to look down at the desert floor on the north side.  Looks hot down there.  We also get service and find out Tami is kicking ass and is only 3 days behind us.  We are hoping she catches up at a trail angel house in a hundred or so miles.  We are planning on slowing down and taking a day off at a one trail angel house and then another day or two at the second where we think she’ll catch us. 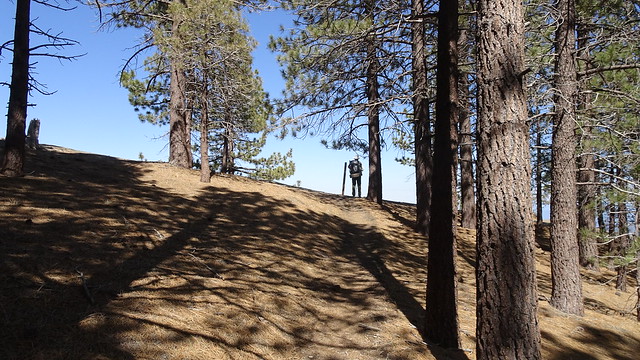 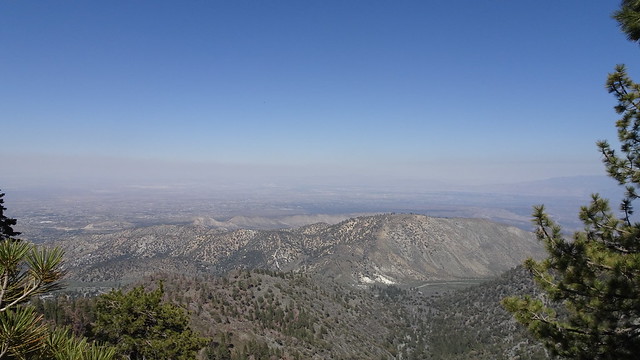 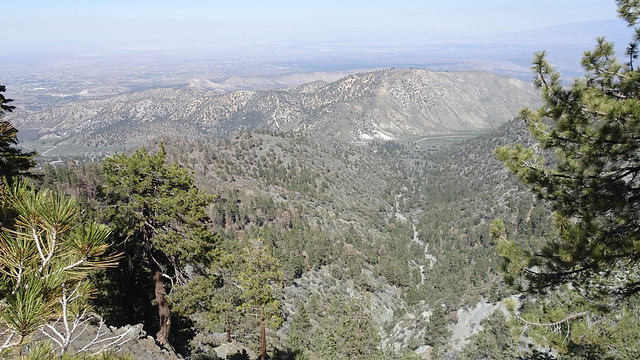 Only a few miles left we continue the steep climb. Luckily it has cooled down and we are in the shade of trees but the climbing seems endless.
We pass a sign that says 1 mile to the campground and I pick up the pace. I’m starving and thirsty and just want the pack off my aching shoulders and neck.  I round a corner and see the trail go almost straight up. It’s the steepest I’ve ever seen. What. The. Hell.  It’s about 100 yards of probably 100 feet of elevation gain. My heart is pounding, I’m breathing heavy, and sweat is pouring from my head down into my eyes. Why? Why trail gods? What have I done to anger thee?

I all but crawl my way up and catch the glimpse of a wood railing, then the tops of a outhouse building. Sweet Odin’s beard it’s over.  I walk into the deserted campground and make my way over to a shaded picnic table.  I take off my pack and just sit. What a day.  I look at my water report and realize the water is still a quarter mile away and a steep decline.  Ugh… well that can wait.  I visit the gross outhouse and am glad I recently got a tetanus shot. 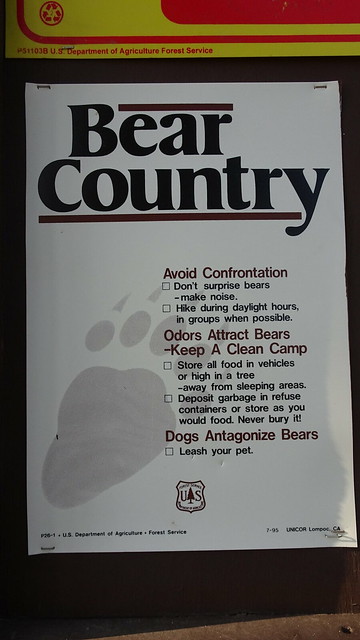 I come back to the table and pull out my food and start eating.  20 minutes later The Hobbit walks up. He looks like a mountain kicked his ass.  It’s good to know that he is mortal too.  He tells us he took a bunch of breaks and that he wished he didn’t wear his pants because the crease in his crotch and backside rubbed him raw.  We all agreed that today was the hardest day so far.

And it wasn’t even over.  We still needed water.  The Hobbit and I head down to find the water and it’s a steep drop down to an old red pump house building. Next to the building is a steel pipe coming out of the ground dribbling water.  It takes quite awhile to fill up my 2 liters.  Then I have to go back up the steep climb. I’m out of breath and thinking I could drink an entire liter just from that climb.

We all relax and eat some food talking for awhile.  The Hobbit emptied his entire food bag on the ground to get what he wanted because he was so hungry.  1,000 calorie mac and cheese mountain house. It smelled good.  I was a little jealous since I go the no cook route. 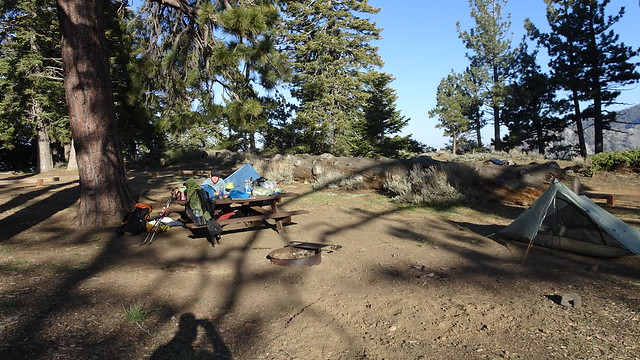 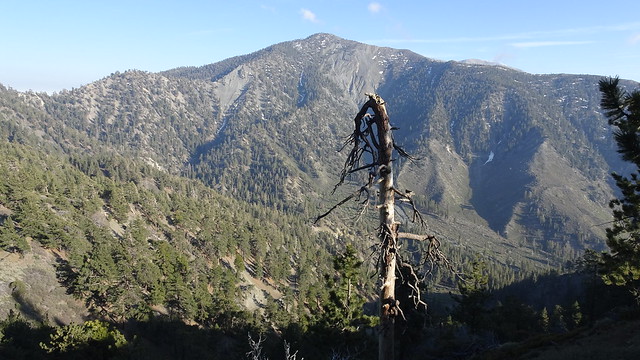