Last night I slept in the backyard of Ziggy and the Bear, which is completely carpeted. There was probably close to 35 hikers all spaced out sleeping on their pads and wrapped up in their bags like little hiker burritos. 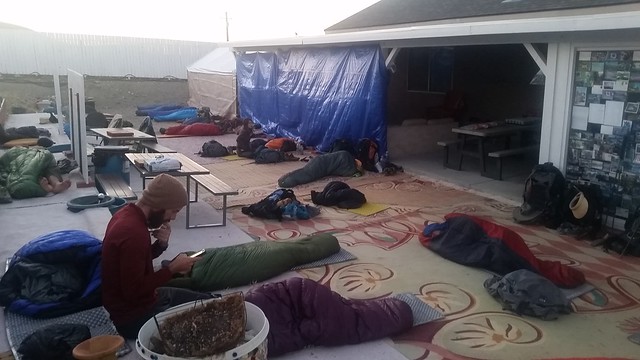 I woke up at 6 and started to pack up my stuff and ate the last few slices of pizza I had left while I watched hikers slowly getting up. Last night it was kind of breezy and I had to use the straps on my quilt that go around my sleeping pad because I was worried it would fly away.

There are a couple guys, Dangermuffin and Double fish, helping out Ziggy and the Bear and they offer rides to the San Bernardino transit station for $10. Jim, Justice, and I put our names down for the 7 am shuttle run yesterday. They could only bring 9 hikers at a time with two cars. It was about an hour drive to the transit station in crappy California traffic. We got to the bus station at 8, bought out $10 ticket for our hour and a half bus ride to Big Bear.

The bus ride to Big Bear wasn’t too bad. The driver must do the drive all the time because we were passing cars all the time. The road had a lot of curves which usually doesn’t bother me but the constant moving back and forth was tiring. 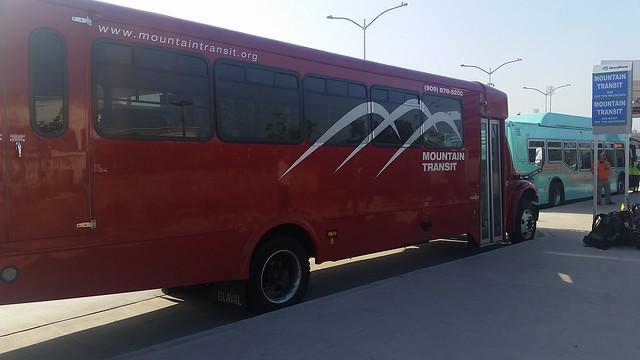 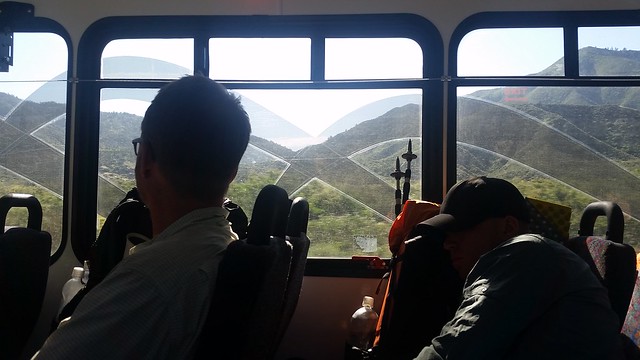 We got dropped off next to a Vons and said goodbye to some of the hikers who needed to catch another bus down to Big Bear Lake where the Hiker Hostel is. Jim, Justice and I are staying at a Motel 6 further east in Big Bear City which is much smaller. We went into Vons looking for some breakfast since we were starving and didn’t want to do our resupply yet especially on an empty stomach.  I got a chocolate milk, a donut, and a chocolate covered waffle. So good! Definitely hit the spot. Justice got the last half gallon of chocolate milk. He almost drank all of it.
After Vons we walked the 2 miles to Motel 6 along highway 18. At this point road walking isn’t as nerve wracking as I thought it might be. Although, it did sick since I had my flip flops on instead of my shoes and walking on the side of the road where there was tons of asphalt debris sucked. It kept getting between my feet and sandals which tore up my feet.

We got to Motel 6 and Justice headed straight to the hiker box and raided it. A hiker box is a box of things other hikers don’t want and are freely available to other hikers. Whether it’s gear, food, or clothes.  Our room was pretty nice. Nicest motel 6 I’ve ever seen. It had hardwood floors and a corner shower. Pretty nice, definitely not what I was expecting.

After getting settled in and explodinget our packs and food bags we headed to the bus stop to take us back to where Vons was so we could go eat lunch and then do a resupply. We waited about 20 minutes, paid our $1.50, and got on the bus with all the other weirdos.

We got dropped off across the street from Vons at the State Bros grocery store. Like right in front of the store. The bus line is very strange and makes no sense here. I looked at yelp and read off all the places to eat nearby and we settled on a burger place called “Get the burger.” It had a Hollywood movie theme going on for the naming of the burgers. I got the Duke which had BBQ sauce, bacon, cheese, and an onion ring. Was pretty good. 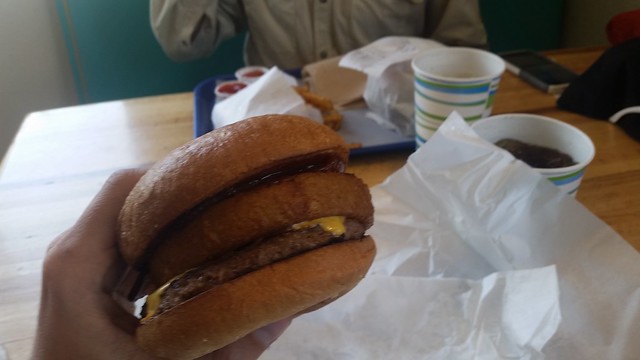 The inside had a pretty cool mural. 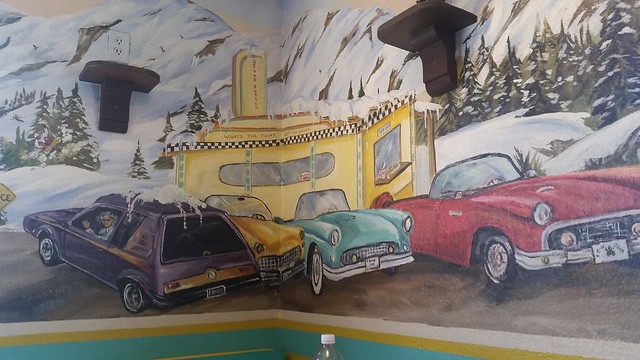 Painted by Amy Fisher. And no she is not the Long Island Lolita. 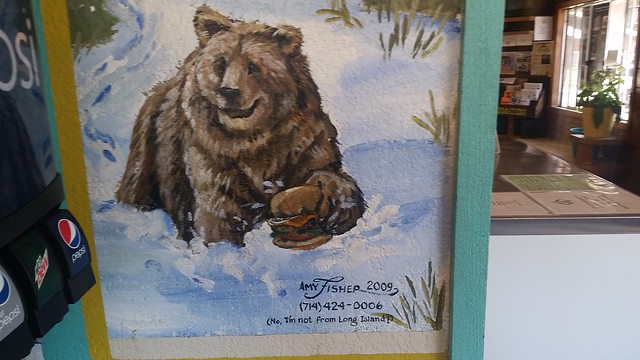 After lunch we walked back to the Vons and picked up some food for our 4 to 5 day hike to Cajon Pass where there is a Mcdonalds almost on the trail.  Exciting! I got some belvita crackers, bars, dried peas, snickers, and a new Smart Water bottle. Justice went over to the Starbucks to use their WiFi and Jim and I caught a bus back to the room.

We got in contact with Tami and she invited us to a home cooked meal in the cabin that her and her husband have for a few days. We also got access to a washer and dryer! Score! They said they would pick up Justice on their way to get us in a couple hours. Jim and I situated our food bags and gathered up our dirty clothes. While messing with my food bag I realized the Smart Water bottle I grabbed was sparkling water. What the heck?! That’s new. Luckily I noticed today and not on the trail tomorrow. That would have been quite the unpleasant surprise.

Tami and her husband Bill picked us up a bit later and we rode to their super nice cabin. It’s amazing. It’s two stories where the top floor has a loft with pool table and a master bedroom,  downstairs had two bedrooms, bathroom, laundry, kitchen, and living room. It was quite nice. 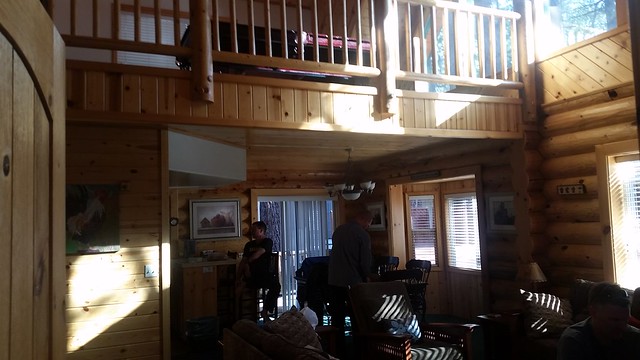 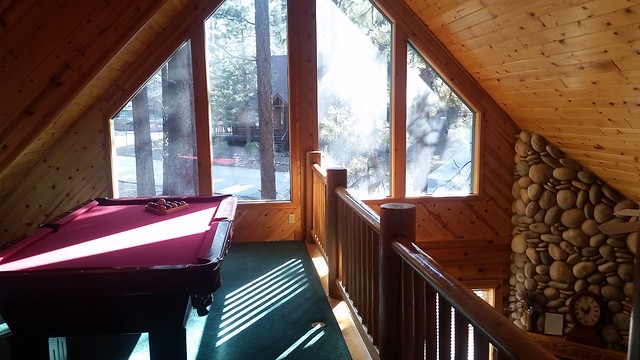 For dinner Tami and her husband Bill made us steak, baked potato, garlic bread, salad, and broccoli. Was pretty great.  Thanks Tami and Bill! I really enjoy hiking with Tami so I’m hoping that she somehow catches up pretty soon. 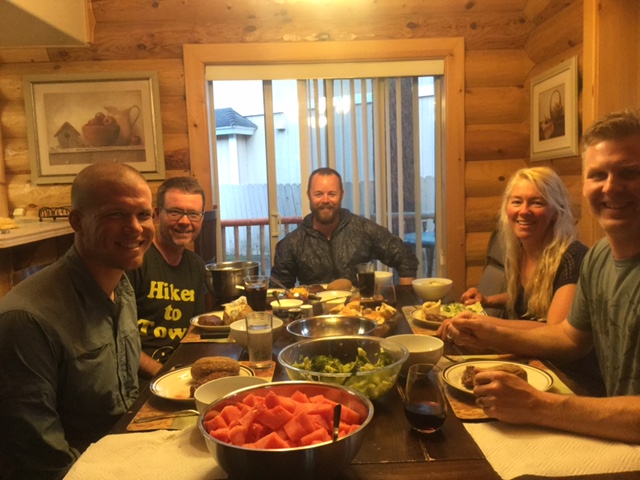 Around 8 we got a ride back to the motel and they offered to take us to the trail tomorrow morning so that we didn’t have to hitch. Awesome people. By 9:15 Jim and Justice were out as I typed as fast as I could. So I apologize for any excessive spelling and grammar mistakes.

Day 12: The long descent to Ziggy and the Bear