There are a lot of terms and slang that hikers use on the trail and I’m sure I’ll be one of them. Below is a list of some of the more common ones that are used.

Base Pack Weight: The weight of your pack excluding food, water, and other consumables. Cache: A supply of food or water left on the trail for hikers.

Cat hole:  A hole you dig to poop in. Classy.

Cowboy Camp: Camping or sleeping with your tent. Only the starry sky above you while you look like a burrito to hungry bears.

Dry Camp: Camping without a nearby water source.

Flip Flop: Skipping a section with the intention of completing the section but in the opposite direction.

Hiker Box: A box where hikers donate unwanted food or gear for other hikers.

Hiker Legs: Legs hard as rock from walking every day.  Every day is leg day.

Hiker Hobble: A phenomenon where once the pack is off a hiker limps around at camp or in town. The one job a thru-hiker has becomes the most difficult thing to do.

Hiker Hunger: An appetite so big that nothing can satiate the hunger. This is due to burning over 6,000 calories a day but only being able to carry and consume around 4,000 calories. 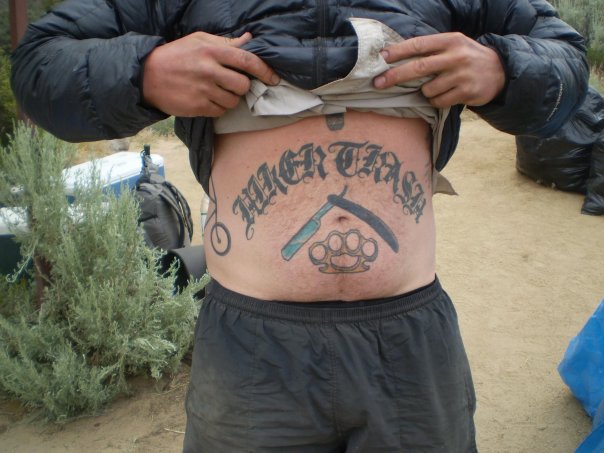 Hiker Trash: Used to describe a thru-hiker because of how smelly and dirty they look.  Often confused with homeless.

JMT: The John Muir Trail which overlaps the PCT for almost 200 miles in the Sierras. JMT hikers typically head southbound.

Nero: A day where a hiker only hikes a few miles.

Post hole: When hiking across snow and your feet break through the snow. Your legs look like fence poles sticking out of the snow.

Ride Bride: A female hiker accompanying a male hiker when attempting to hitch hike. Guys are more likely to be picked up if they have a gal with them.

Resupply: When a hiker hobbles out of the wilderness and back into town to get food, booze, and electricity.

Stealth Camp: Camping with the intention of not being seen.

Trail Angel: Someone who provides trail magic or helps out hikers without expecting anything in return.

Trail Magic: An unexpected act of kindness, usually through caches of water or food.

Trail Name: A nickname used by a hiker during their thru-hike. Trail names are supposed to be given from other hikers. Although, ultimately it’s up to the hiker to decide if they want that name or if they would rather just use their real name. A trail name often comes from a humorous or significant characteristic associated with the hiker. Easier way of identifying hikers instead of their actual names especially if you have numerous John’s on the trail. Plus they are fun!

Vortex: Anything off trail that pulls hikers in and makes it hard to get back onto the trail. Such as trail towns, restaurants, hostels, etc.

Zero: A day where a hiker does not hike any miles.