I heard 5 Star and Songbird moving in their tents around 5. I went to sleep yesterday pretty early but I was still a bit tired and didn’t really want to get up. I waited until I heard 5 Star let the air out of his sleeping pad before I sat up and started getting ready. I packed up ate my biscuits before heaving the pack onto my shoulder.

The first part of the day was downhill and then a few miles through a valley. Going down was a bit rough. It was quite steep and lots of loose rocks to lose your footing on. We crossed over Cataract Creek which required some rock hoping. Only thing worse than wet feet in the morning is cold and wet feet. 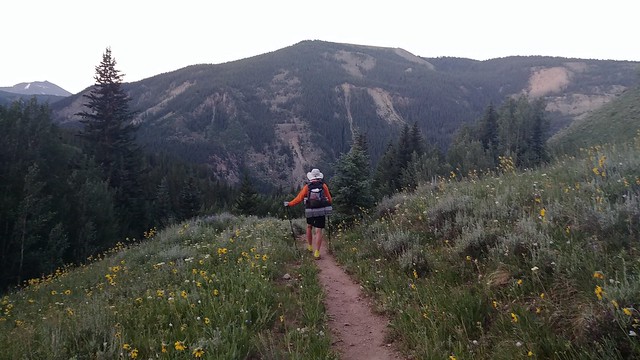 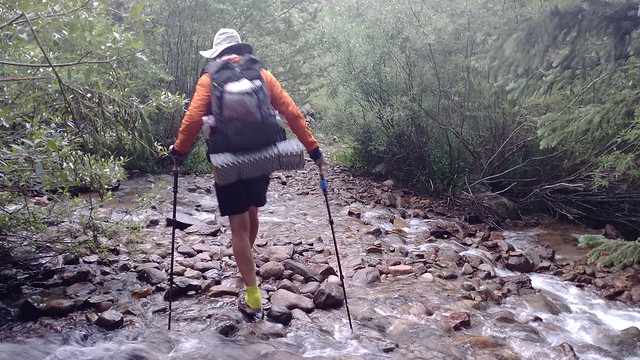 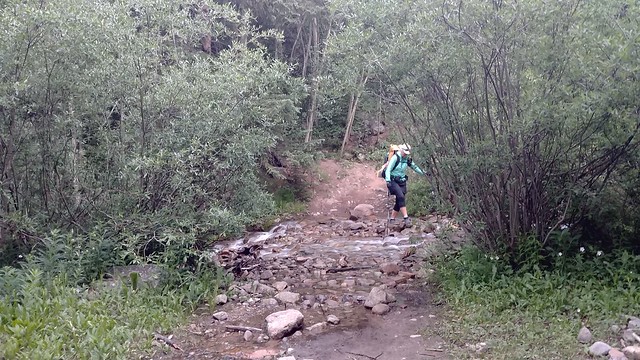 By the time we got to the bottom my knees were sore. They haven’t been this sore since my 4th day on the PCT. Speaking of the PCT, it just wouldn’t be through hiking witbout some explosives. 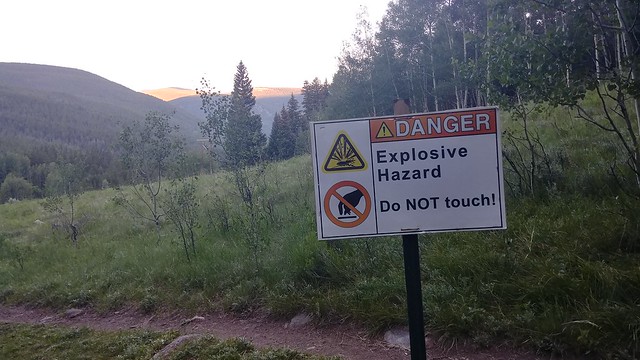 The valley we dropped into was used by the 10th Mountain Division in World War II. We walked down a dirt road for a mile or so and came across some of the old bunkers. 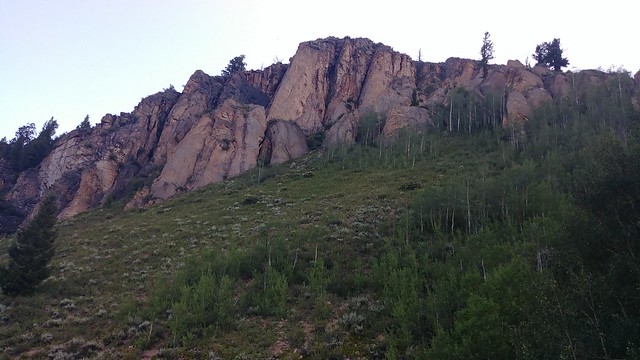 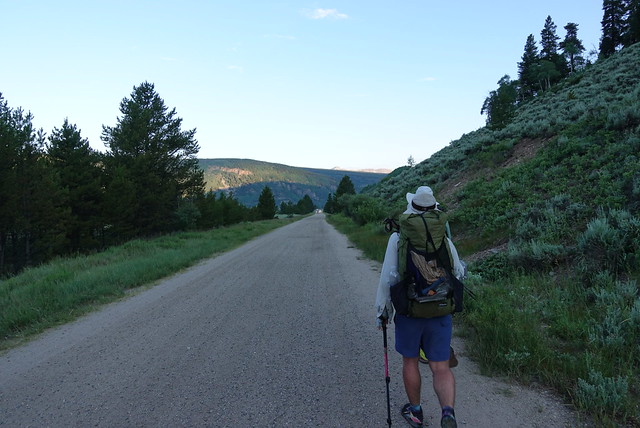 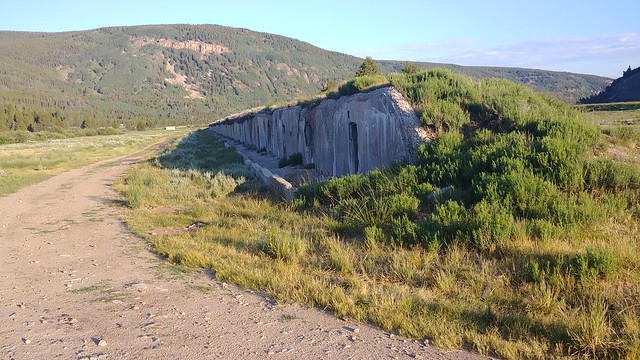 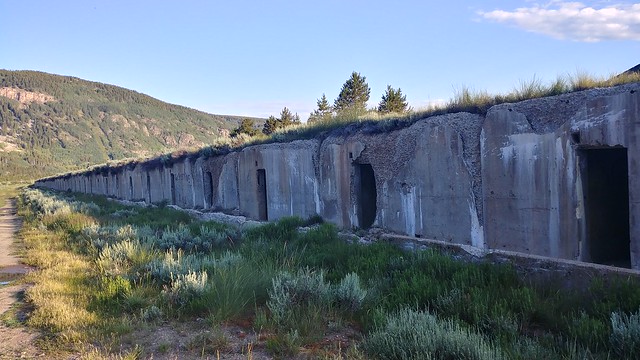 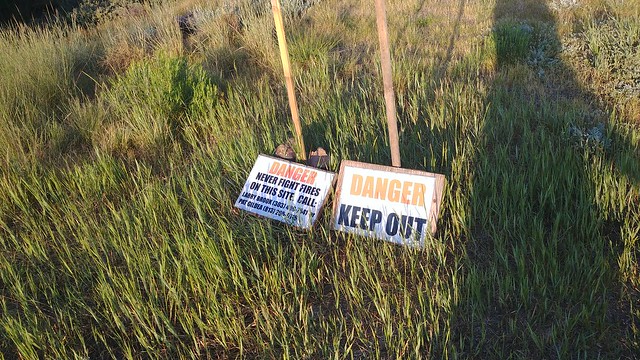 After the bunkers we started heading up again. We started to parallel highway 24 and could hear the cars down below us. A couple miles later there was a break in the trees and we could see the road. 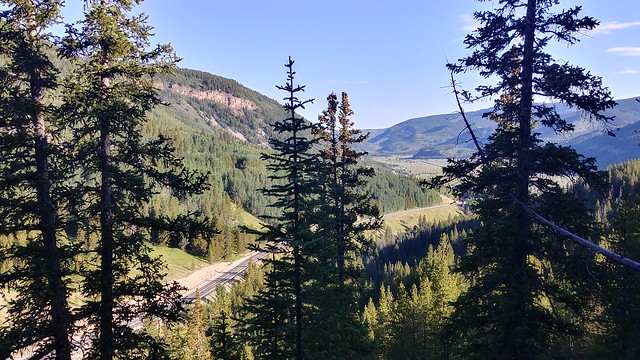 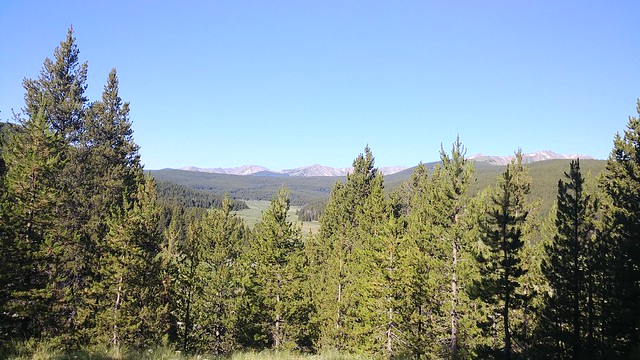 We dropped down a bit and crossed the highway and then dropped below the road into a meadow. We crossed over some train tracks that don’t look like they have been in use for a long time. 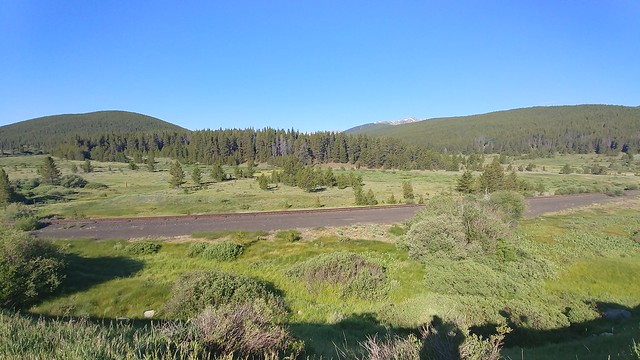 We crossed the meadow to where the trail started to go up again. Right before it went up was a small creek that had a light flow to it. I didn’t have any water yet and the next water wasn’t for a few miles. It’s nice bring able to hike with 1 or 2 liters instead of the 4 or more liters needed on the Southern California portion of the PCT.

While filtering an older man and his daughter walk by. We finish getting water and Songbird said she needs to water a tree. She walks up the trail to where the trees are and then turns around. The man was standing just up the hill and Songbird thought he was peeing. She waits another couple minutes and he is still there. We decide to just hike on and walk by even if he is having the world’s longest pee.

As we walk by we see the daughter’s pack on the ground. She must have been off doing whatever. We talked to the guy for a bit. He is hiking with his son and daughter who hiked the Appalachian Trail a couple years back. Their trail names are Hansel and Gretel.

The trail went over the small hill and dropped down and followed along with another meadow that was on the other side of the hill. I was in front heading up the trail in my own world thinking about food when I saw a moose and her baby walking through the trees. I stopped and pointed them out. They were only about 50 feet from us. I waited for them to continue on their way before I moved. Don’t want a second angry moose. 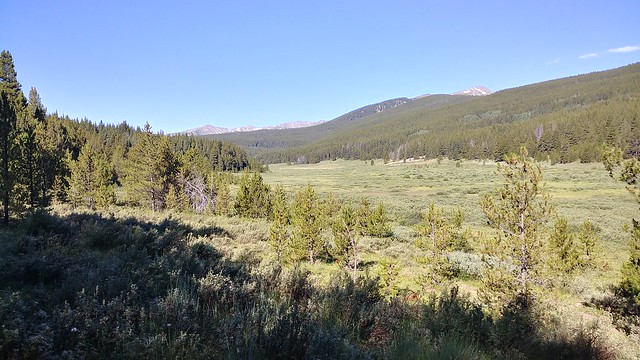 We kept hiking until we came to an old dirt road. The trail turned right on to the road and we walked on it for a couple miles. As we were walking on it we noticed the back half of an old Ford Model T or A down in the trees. I wonder how long that has been sitting there. We came to an old bridge made out of logs but there was a small wooden barricade and the trail went up and around it.

We turned a corner and saw these two stone buildings that are partially standing.  They looked to be originally domed shaped. The insides were black from soot. We checked the databook and it said they were coke ovens. No, not that coke. Nope not that coke either. I guess it is an oven for smelting ore or making coal. 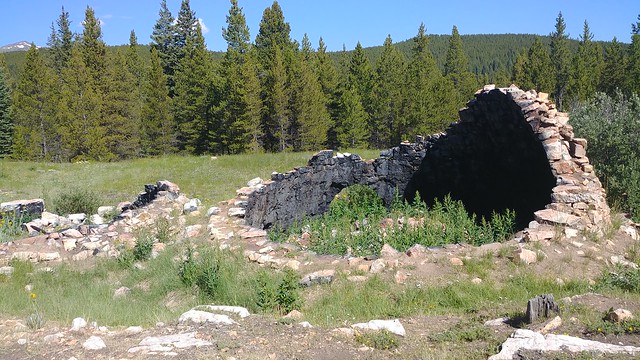 We continued on the dirt road until we came to a nice flat area that was in the shade and took a break. We sat there for an hour watching the parade of hikers going by. In both directions. I saw a grayjay hoping from branch to branch. I put a Cheeto in my hand and held it out. The grayjay swooped down, landed on my hand, grabbed the Cheeto, and flew off. They are not shy at all. Songbird wanted me to put a Cheeto on my head so she could get a picture but they flew off.

5 Star was looking at the data book and said there was a trail head with a pit toilet only 1/4 mile away. We packed up and made our way there. The toliet was almost full but at least it didn’t smell. As we were getting ready to head down the trail we saw Dana walk up. We said hello and she set her pack down. She seems pretty shy and keeps to herself. 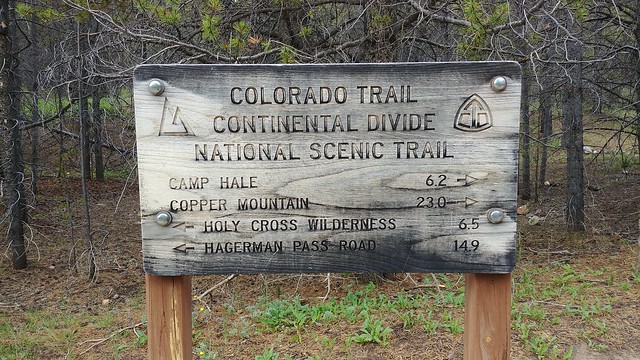 We started down the trail that was thankfully relatively flat. We came to a bench swing. That would be a good place for a break. Darn! 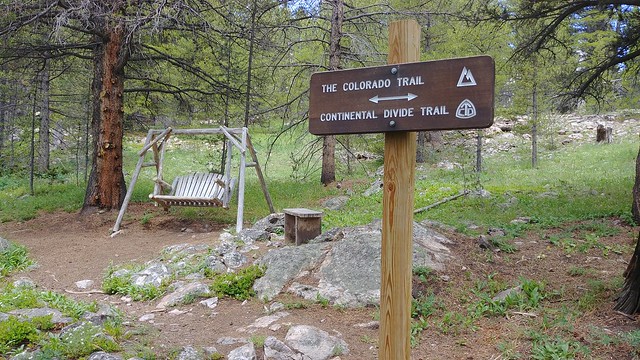 As we are heading towards a creek where we are going to get some water we see a sign that says “Warning Bridge at bottom of hill.” Ok? Why is that a warning. I could see if there wasn’t a bridge. Maybe there is a troll and we have to pay a toll. 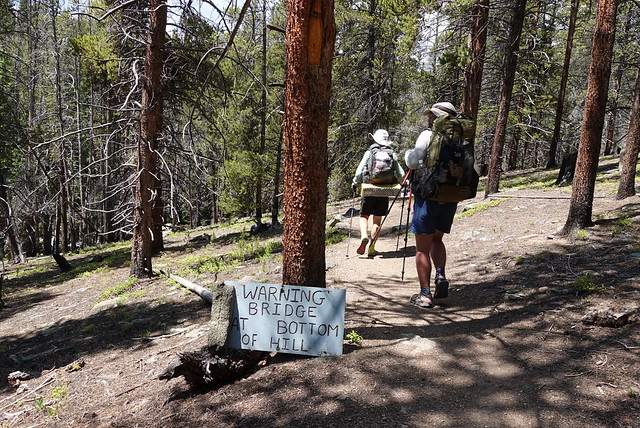 We get to the bridge which looked relatively harmless and troll free. We get some water and look at what our next water source is. 4.5 miles away is where we planned to stop. It’s only 12. We would be there in about 2 hours. We decide to hang out by the creek and have lunch. 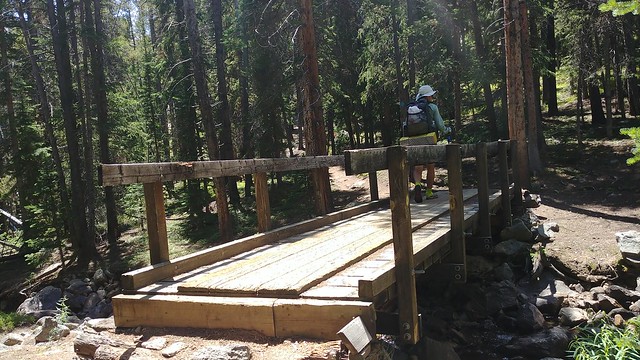 As we are sitting there a bunch of young kids led by a couple young guys walk by. A particularly annoying young girl yells “greetings weary travelers we are from the Wandering Mountain clan!” Oh boy. I really hope they don’t plan on staying at the lake we are heading too. Without missing a beat 5 Star says “and where are you wandering to today?”  One of the guys leading this walking form of birth control says they are heading to one of the cabins that is part of the 10th Mountain Association.

A few minutes later a young Ringo Star with a purple scarf trots down the trail. We say hello. He says his name is Nemo. 5 Star says “oh like the movie?” Nemo says “No It’s from the Latin word “no one or nobody” but everyone thinks the movie.” He talked very fast with the cadence of someone that has told every passing person the same story and asked the same questions. He trotted down the trail after about 5 minutes. Weird guy.

We get up around 1 and start making our way uphill. We have about 1,000 feet to climb over a few miles. After about 5 minutes we round a corner and hear “greetings weary travelers we are from the Wandering Mountain clan!” Just snip me now. The leader sighs and says they’ve already said hello to us. Poor guy. Better him, than me.

The trail starts to get steep and rocky. I put on an audio book and continue to plod along. I take my time and let 5 Star and Songbird motor on up. 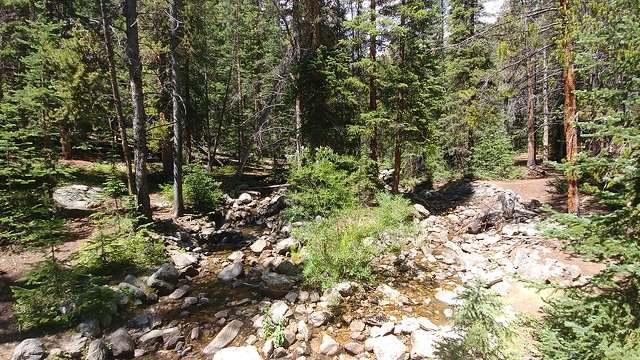 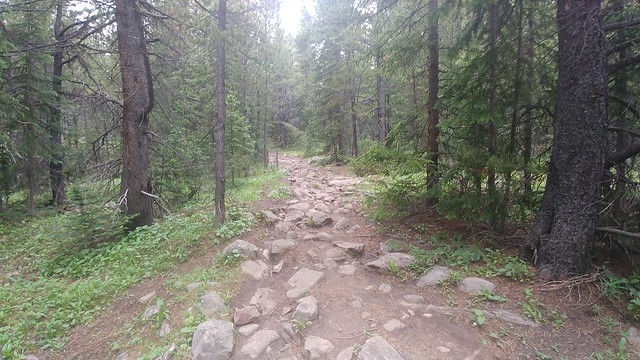 The sky starts to darken and the chance of camping in the rain gets larger. I come to a Wilderness boundary and I see 5 Star and Songbird in the distance. 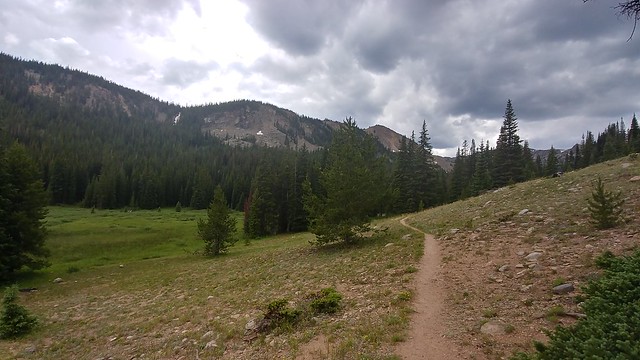 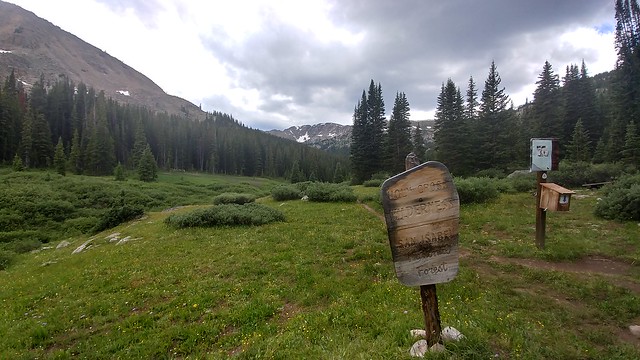 I cross over this marshy wet area and start heading up again. The trail somehow gets steeper. I’m about a mile and a half from the lake when I start feeling rain drops. 5 minutes later I have to pull out my umbrella. I collapse one of my trekking poles and tuck it to my side. I slowly make my way up. I breakout of the trees and get a great view of the mountain across the way. 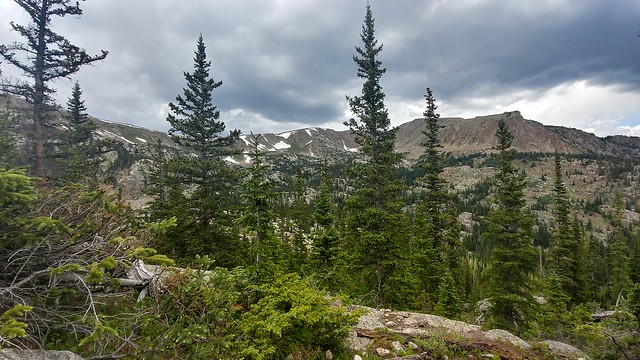 A couple minutes later I reach the top where the lake is. I look around for 5 Star and Songbird. I see a tent but it isn’t either of theirs. I pull out my head phones so I can hear them and keep walking. A minute later I see them across this wet marshy area by the lake. They motion for me to keep going and they walk parallel to me. I see a side trail towards them and start walking towards them. They head up into the trees a bit and I see a flat spot that could hold 3 tents. We quickly set up our tents while there is a momentary lull in rain. Although, the blood suckers are out in force.

I set up my tent and throw my stuff in just as it starts to rain again. I kill a few blood suckers and lay back on the cold ground. I’m too tired to blow up my sleeping pad. I situate my stuff and pull out my sleeping pad. The ground is really cold. I see a flash of light and start counting. 5 seconds. Less than a mile away. Well, here’s to hoping I don’t get hit and if I do it’s a direct hit.

I blow up my pad and start to write. It’s only 330. I lay down and fall asleep for about 2 hours. I wake up to 5 Star saying he is going out to get water. The rain stopped but the mosquitoes are swarming. They smell dirty hiker blood. They want our high sodium blood. Bastards.

Around 6 5 Star grabs Songbird’s stove and boils water for a freeze dried meal. He’s making the Backpackers Pantry Jamaican Style Jerk Rice with Chicken. I have the same and planned to eat it since it was the heaviest one I had. 5 Star boils his water and pours it into the bag. He brings me the stove and I boil some water too. The directions say to let it sit for 13 minutes if you’re at 5,000 feet and to double for every 5,000 feet over. I am at 11,421 feet. We have to wait 30 minutes.

5 Star starts eating his about 10 minutes before mine is ready. He asks if I’m ready for a bag of broken dreams and disappointment. I was hoping he was joking. At 7 I open my bag and take a bite. I’m not sure how Backpackers Pantry managed but somehow they filled a bag with the salty tears of orphans. It was so salty. I put some on a tortilla but it just tasted like a salt taco. I am reminded why I prefer no cook. 45 minutes wasted. Now I have a half full bag of regret sitting outside my tent. I hope a bear carries it off for me.

Day 8: Hike there fast and take it slow