Day 76: A long climb out of Belden

It was so nice to sleep in a bed last night! I even had a pillow! Such luxury. We had the windows open and the room was cooling down. The bed only had a sheet which was fine until around 3 when I woke up freezing. There were no blankets and I didn’t want to empty my pack to get to the quilt which was stuffed at the bottom. I curled up and went back to sleep.
I woke up at 5 and 5 Star was starting to shuffle around. We got ready and by 5:30 we were sitting and waiting for 6 when Brenda would take us back to the trail. We heard the side door into the kitchen area open. We walked in the kitchen and there was muffins and fresh cut watermelon. I love this place. Wish I could stay longer. At 6 we pile into the truck and off we go back to the trail to begin a 5,000 foot climb.

We get back to the trail on the other side of the road and river. Right where the trail starts there is a huge contraption. It was an old gold mining rock crusher. It would crush rocks to extract gold and was used during the gold rush. We hopped on the trail and began the climb. 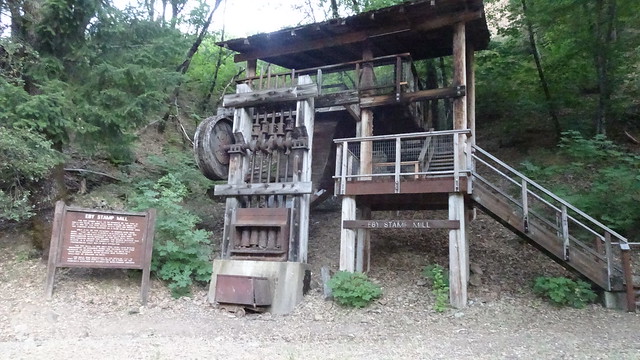 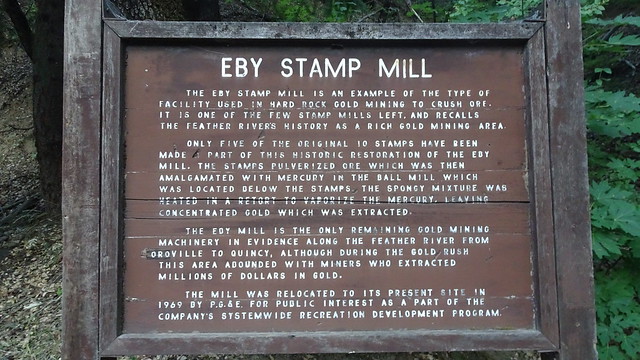 The climb wasn’t too bad. We were shaded by the mountain as the sun was rising. Which is a good thing since we were in an old burn area so there wouldn’t be any shade from trees.  There was also lots of small streams so we didn’t have to carry a lot of water. 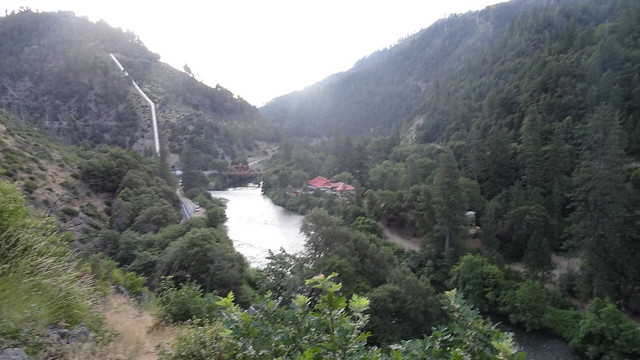 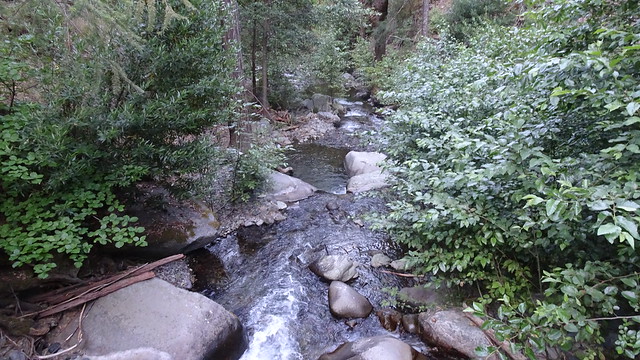 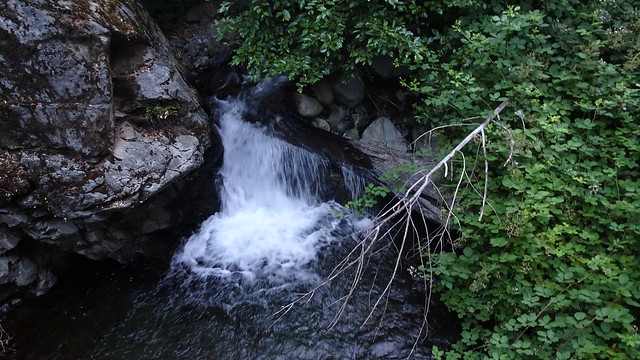 We crossed over into Lassen National Park early on. Brenda mentioned that we also would be entering the Cascades Mountain range. I’ll be on this range all the way to Canada. That’s exciting! 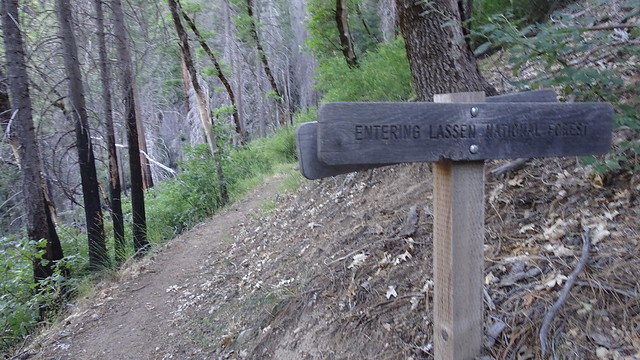 The ascent wasn’t too bad. It wasn’t unreasonably steep and I was in the shade most of the climb. Once the sun rose I was back in tree cover. Although I did have to deal with lots of brush and more thorny bushes that wanted to cut my shins up. 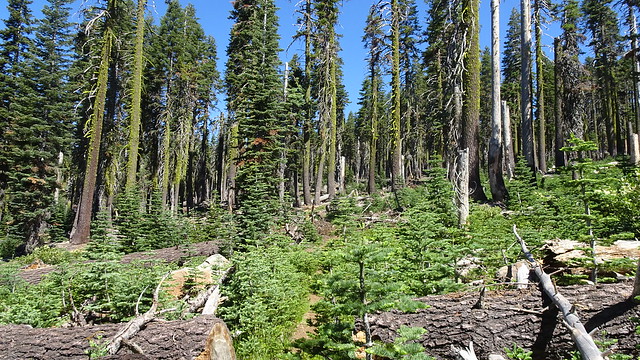 5 Star is always faster going up hills and I’ve decided to go my own pace so don’t wear myself out. I listened to my audio book. I finished the 3 Mistborn books that take place after the original three. I’m currently listening to a Warhammer novel. I really dig the Warhammer 30,000 style. There is a lot of Latin and Ancient Roman influence in the words. For example instead of factory it is manufactorum. The novel revolves around the Astartes which are genetically created and enhanced men who are basically immortal. They don’t die of old age, they have one purpose and that is warring. They are 2.5 meters tall and weigh close to 1,000 pounds. They are the elite of the elite. Unstoppable spacemarines who have no understanding of the word fear. All in the name of the Emperor of Mankind. The emperor makes the spacemarines seem as if they are children in comparison.
Around 1130 I reach the top and 5 Star is standing there. We sit down in the shade and have lunch. I check and see I have service. I get a picture from my roommate. My dad and him have cleaned up my backyard that had gotten overgrown with weeds. I had a couple orange trees that I planted years ago but one died a couple years later and the other didn’t survive over the winter and spring this year. After lunch I called my dad and talked to him. I asked if he could plant a couple fast growing shade trees to block the afternoon sun. So the trick to getting yard work done is to go hike 2,600 miles so you don’t have to. Not sure which is easier…

The rest of the day was lots of up.and downs. Even though the trail was descending there was still a lot of going up. For the most part I felt good the whole day. I stuck with 5 Star the second half of the day. Off in the distance we could see Mount Lassen towering over the mountain ranges. I’m pretty sure it’s Lassen. 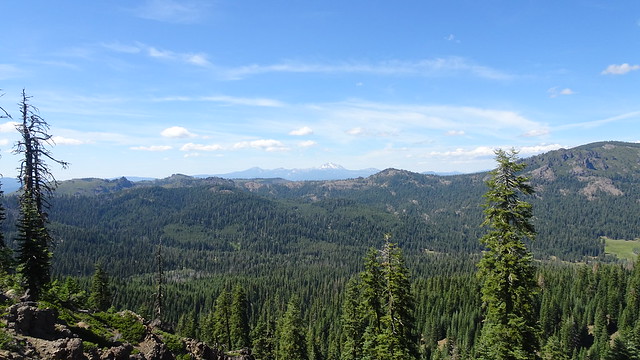 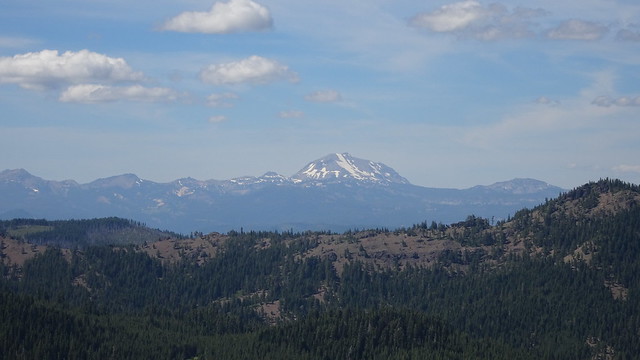 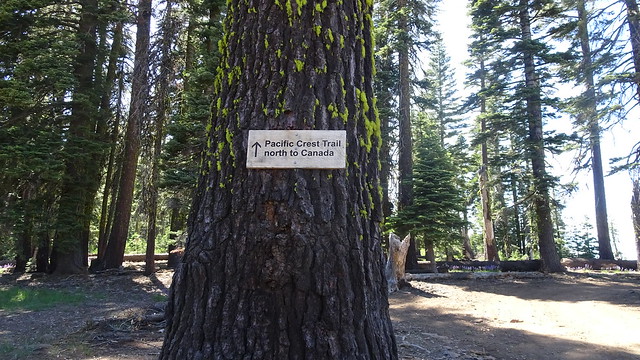 Jim wants to copy me and see what walking with half a shoe is like. 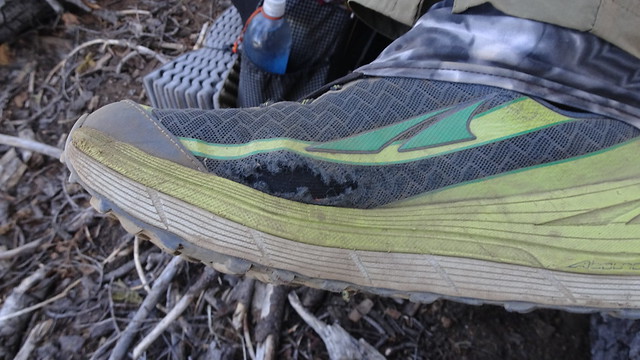 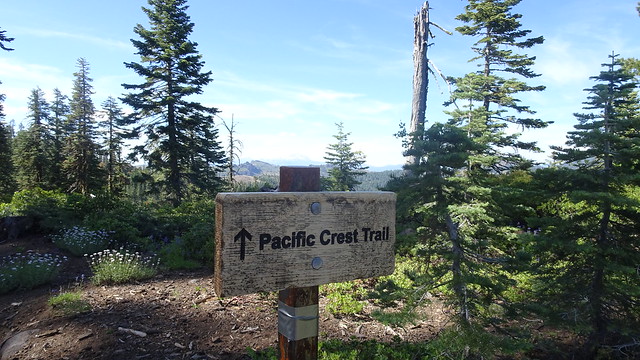 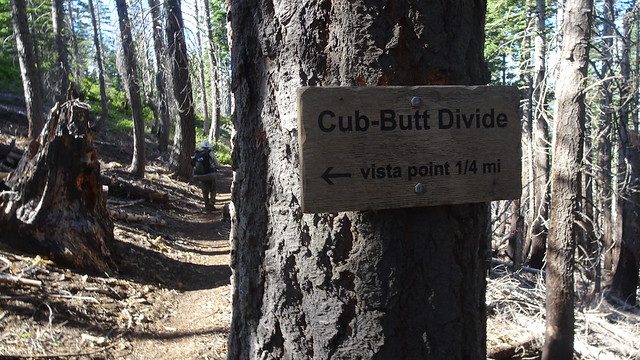 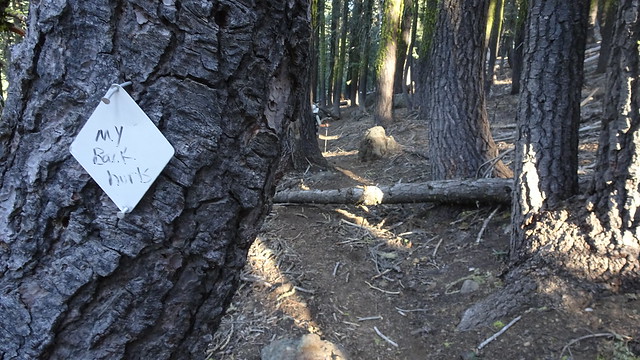 At 6:30 we got to the Carter Creek junction where there was room for two tents. The creek was over half a mile away so we didn’t get water. A lot of the water sources lately have been over 3/10 of a mile off trail so being lazy we just carry more. Currently we are in the middle of a 23 mile stretch. First time in over 600 miles I’ve had to carry 4 liters. Definitely miss having water every where.

I set up my tent and then sit on a log to pull off my shoes. My poor feet. So dirty. The bottoms incredibly sore. The last 3 toes on my left and just under the foot by those toes is numb. 5 Star said that happened to him on his section of the Appalachian Trail and that it took awhile for the numbness to go away. All the walking is pounding the nerves. I also noticed my ankles look funky. As if they are sticking out more. Little swollen on the front too. They don’t hurt though.  I’m not too worried. I think it was just a strenuous day today. I did over 8,000 feet of climbing today.

Tomorrow we are going to try and get as close to Drakesbad Ranch resort or camp right at the junction. It’s about 32 miles away. We have reservations for breakfast which is between 7:30 and 8:30. Supposed to be pretty good. Tomorrow also marks a monumental achievement which I won’t spoil for you my dear readers.