5 am. Pinecone alarm clock.  Today’s the day. New month.  Eye of the Tiger is blasting in my head. System diagnostic confirms stomach is at 100%. Nether region chafe and blister are at manageable levels. Time to show this trail who is boss. 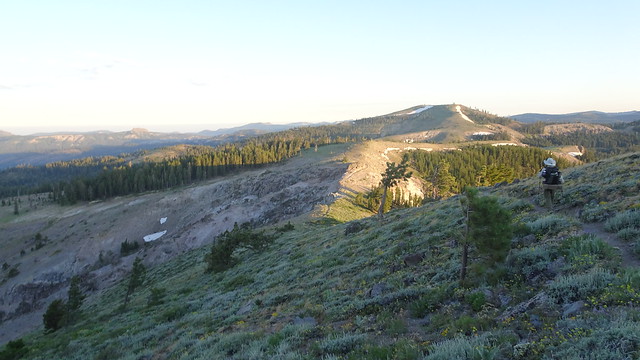 Around 7 we started to drop more and the trail was very rocky. The trail had big steps made out of boulders. This is brutal on the knees. We came to a junction that had a sign with some quote on it. The English was superb. In my head I’m picturing some guy roping together an entire family of Chinese with the last name Chan together to pull up a wagon. 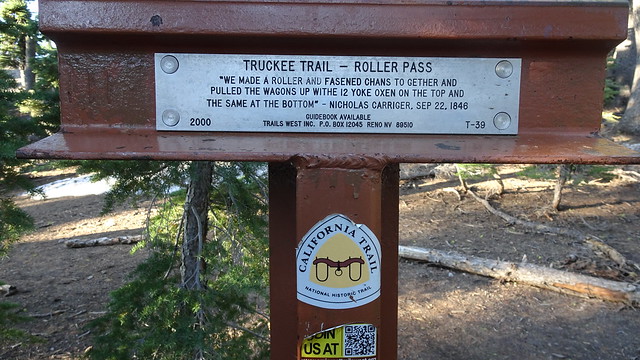 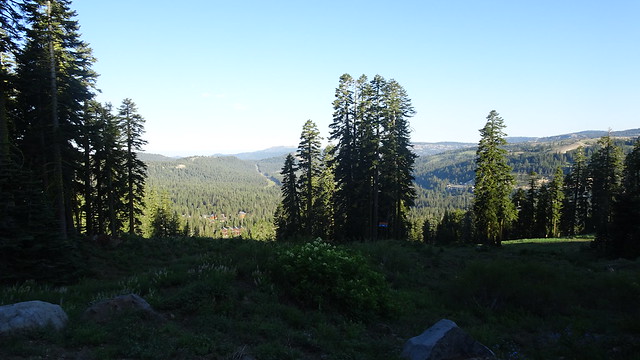 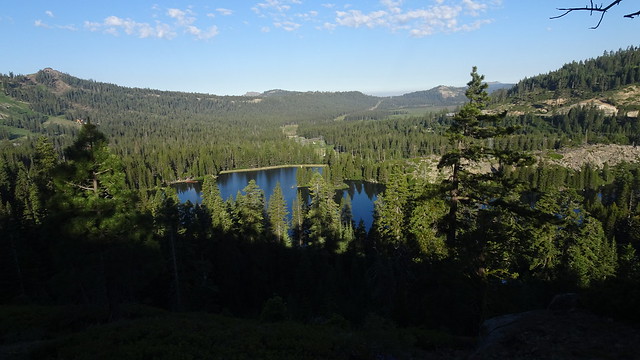 The trail drops down to a road and at the trail head is a trashcan. 5 Star and I dump our trash and food that we just can’t stomach. I had some cheese that just didn’t last. Getting too hot for it now.  We walked down the road a bit before getting back on the trail. We walked by a few buildings. No trail magic coolers to be found. Sad days.

The trail climbs a bit and off in the distance is Donner Lake which means we are on Donner Pass. The pass, lake, and just about everything in the vicinity is named after the Donner Party. The Donner Party is not the type of party you want to attend. A group of people in the 1800s were moving out west and through a series of unfortunate events, bad decision making, and shady guides the group got stuck at the lake and were unable to go over the pass due to snow. Eventually food ran out.  Then as people died they resorted to cannibalism. It is a very interesting event and I recommend reading up on it. 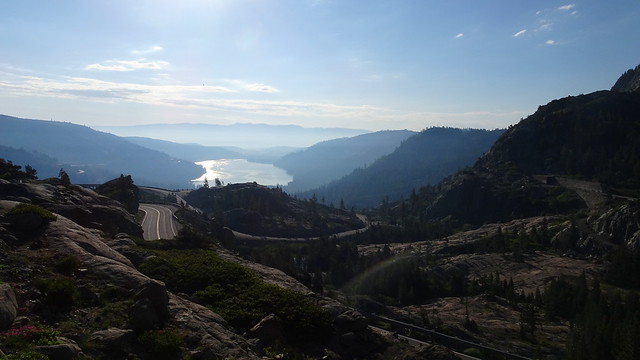 Luckily Donner Pass was uneventful for me. No snow. I looked around for any cannibals but only saw Hollywood superstar Shia Lebeuf.

After the pass the trail headed towards interstate 80. We passed underneath it and then took a side trail to a rest area. We walked up to the rest area hoping for a soda vending machine. It was a large stone building. I walked into it and only found bathrooms. Damn… 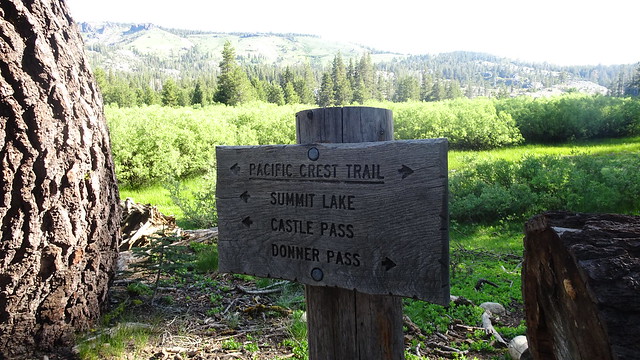 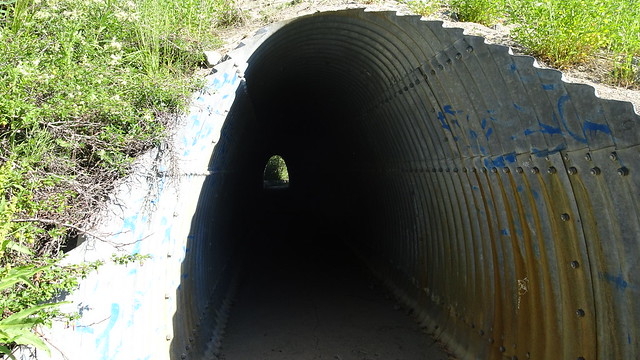 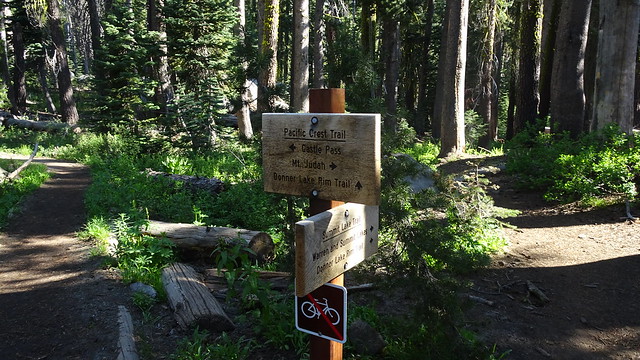 We walked back outside and set our packs down on the side of the entry in the shade. I saw an outlet so I took advantage of free electricity. I did use the bathroom. Not going to turn down an opportunity to use a porcelain throne. We sat in the shade by the entry scaring off little children with our smell. Parents pulled their kids in close and said “that’s why an education is important. You don’t want to look and smell like that do you?”  Hey lady! I worked hard to look and smell like this! 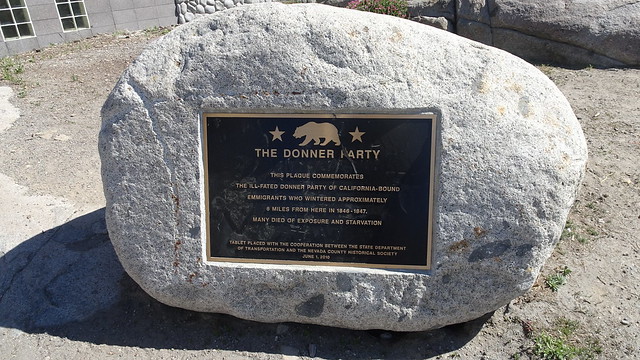 After bringing down the quality of the otherwise nice rest area we left. Sodaless. No nice people offered food or soda. Is it the smell? We hopped back on trail and started making our way up.

We hiked for a few hours and around 12:00 I was starving. We tried finding a place to stop but we were getting swarmed by mosquitoes. There was stagnant bloodsucking cesspools everywhere. We had no choice but to continue on. We had dropped down from a pass and so we continued on and hoped to find something once we started heading back up. 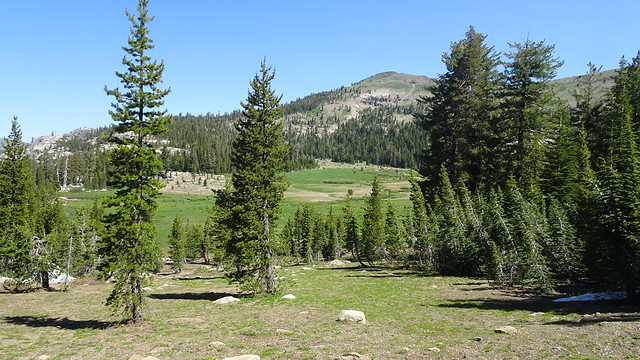 We climbed up and broke out of the dense trees where there was a a strong breeze. The mortal enemy of mosquitoes.  We found a somewhat flat area on a rock that was shaded. We made our way over and stopped. I pulled off my hat and there were mosquitoes in it! Bastards! Although mosquitoes are driven off with a breeze flies are not. They had no problem buzzing around me and trying to get into my eyes and ears. Not a relaxing break.

We got up and made our way back to the trail. The next 10 miles would be a roller-coaster. Up and down. The good part was the last up of the day would be the last time we went over 8,000 feet!
The trail was relatively nice. There were a few snow fields to go over after lunch. It was also very hot out. So I made myself a Montana hat liner, as 5 Star calls it, and put snow under my hat. I then grabbed a handful of snow to eat. Like a slushy with no flavoring. I had to reapply the snow under the hat every 10 minutes though. It was quite warm. 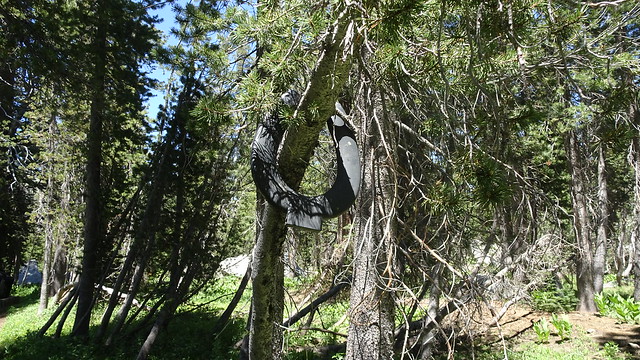 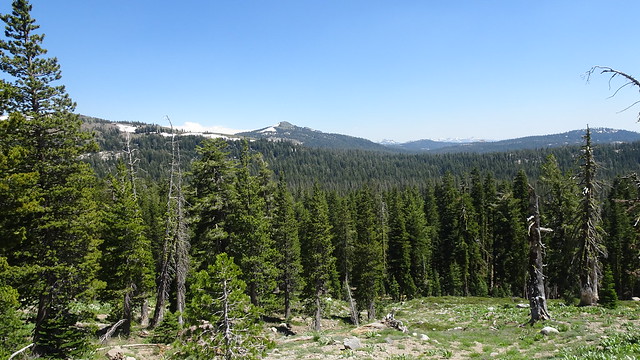 We came across a dirt road and a couple jeeps passed us. We put on our friendly but thirty faces. Nothing. We even could see the giant coolers. 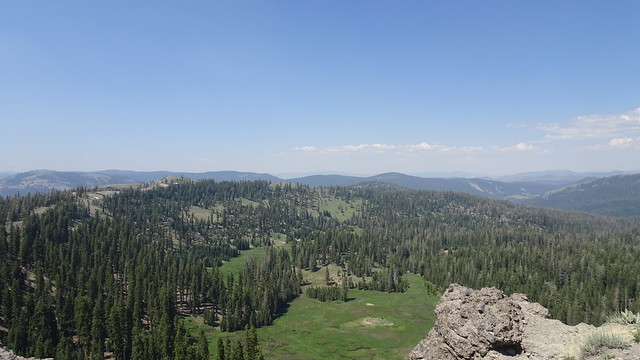 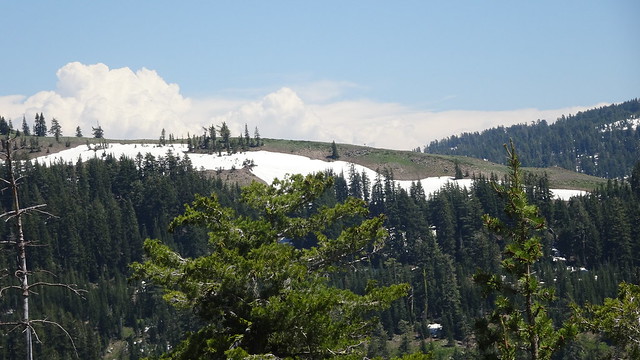 As we approached the base of our last climb for the day we walked by a couple car camping. We talked to them for a couple minutes. 5 Star doing his best to see if he could yogi some sodas. He mentioned how hot it was and then pulled out a water bottle with 1/4 liter left and downed it. No luck. What’s a hiker gotta do for a soda?! 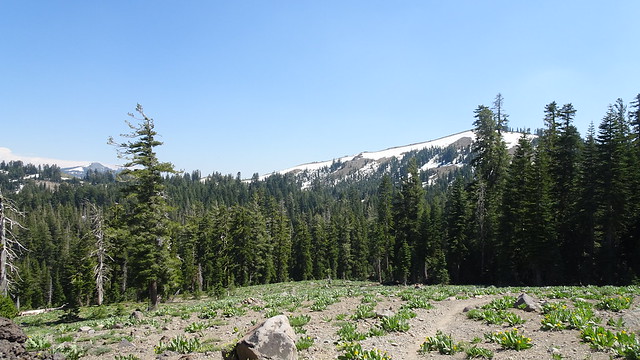 We reached the top of our last 8,000 foot climb. Woo! The view was a bit smoky but I was excited nonetheless. 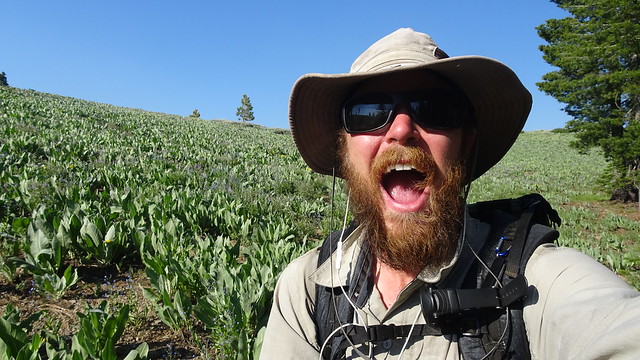 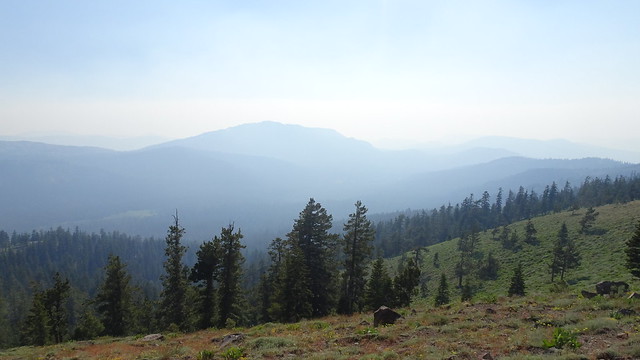 Not only did we reach our last 8,000 we reached 30 miles in a day! How awesome is that? We started to descend and look for a place to camp. Unfortunately we were up on a ridge. We got to a creek and quickly got water before the mosquitoes knew we were there.
We eventually found a place that had a couple flat spots. I set up my tent, got inside, and then rubbed my sore feet. 33 miles in a day.