I didn’t sleep great last night. I tossed and turned all night. I hoped being tired, not feeling good, and a melatonin would knock me out. Around 5:15 I woke up to a pine cone hitting my tent. I was so tired. On the plus side my stomach didn’t hurt. I sat up and slowly started to pack my stuff away. It was about 52° so it wasn’t too cold.

I finish packing up and pull out a belvita biscuit to munch on. I’m worried about eating after yesterday. 5 Star thinks it might be the altitude messing with my body. He said when he did it a couple years ago that people from lower elevations would have similar stomach issues. Its just weird because I’ve had altitude sickness before. I hiked up Humphreys Peak outside Flagstaff. You start at around 9k and climb to 12k. I was ok up until I got to around 11k feet. I had a headache, was very tired, and could only walk 100 feet before having to take a break. After I reached the top and hung out for about 10 minutes I raced back down. By the time I got to my Jeep I had a really bad headache and thought I was going to puke. I’m not experiencing the same symptoms this time.

Once everybody was ready we headed out. Today would be a very long and tiring day. We would be climbing from about 7,500 feet to 10,650 over 9 miles. I was feeling pretty good and my stomach wasn’t bothering me at all.

We hiked for a couple miles and filled up at a creek. A couple young guys came by as we were just getting ready to leave. They had big packs. One had a gallon jug of Arizona ice tea hanging off his pack. We talked for a bit and told them our trail names. They said they need to think of cool names. I told them you can’t name yourself. You get named for doing something stupid or a defining characteristic that stands out. 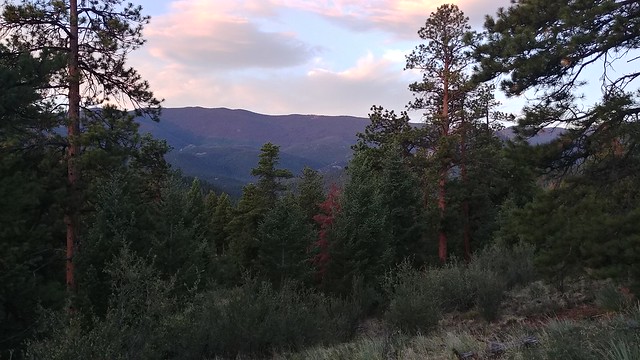 We left the creek and hiked for another mile and then took a break to eat some breakfast and so Tami could make some coffee. Tami has had an identity crisis with regards to her trail name. When I first met her on the PCT she was Smile. When I met up with her in Oregon she was Do-da. Tami is pretty good at spotting and naming birds. Yesterday we joked about calling her Big Bird. Towards the end of the day Tami was singing to help motivate me up the hills. 5 Star pointed at her and said Song Bird! She seemed to like it and today started going as Song Bird. I think it’s fitting.

We got up from our break and quickly passed through an area that is a rifle shooting range. Luckily we didn’t hear anyone shooting. Hiking through shooting ranges is always unnerving. 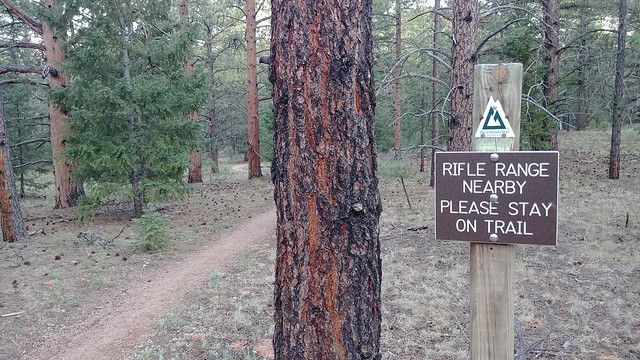 While hiking through the rifle range I saw another lone shoe hanging off a branch. How are people losing shoes? Why do they have multiple pairs of shoes? 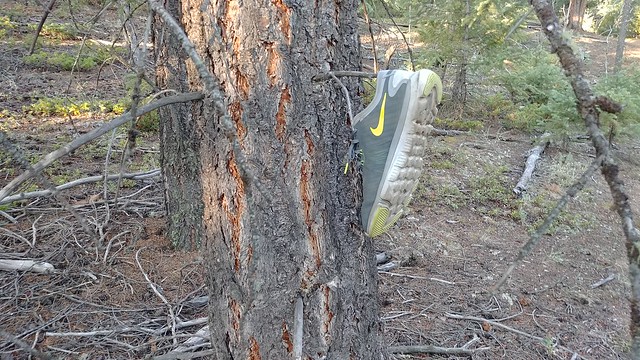 We hiked for about an hour until we saw an older man just leaving his camp site. We asked him if he had seen a German guy this morning or yesterday. He said he leaped frogged with him yesterday but the German guy was ahead of him. He gave us a quick description and then we headed off. About 5 minutes later we realized that we should have asked what the German’s guy name was. Guess we are not very good detectives. 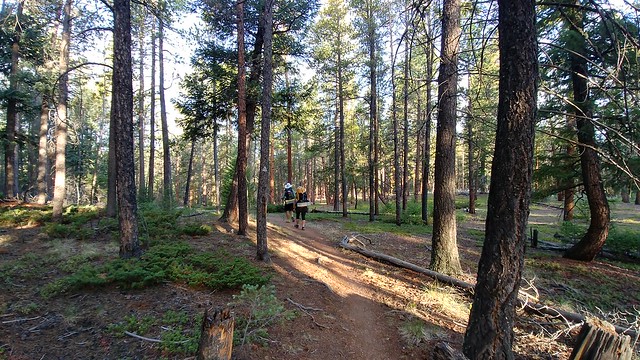 We continued walking until we came to a dirt road and trail head. On the trail head sign was another lone shoe. We saw three hikers hanging out and asked if they have seen the German. They said they saw a guy yesterday that fit the description. 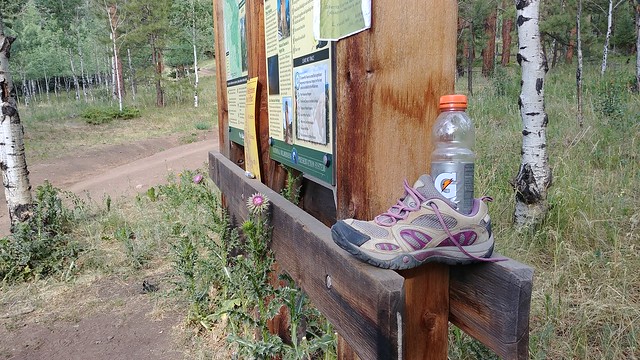 The next section we are about to start is all uphill. A very steep climb on an old dirt road. We came across a couple ladies that just started and talked for a bit. As we started hiking away one of them said she saw baby owls. Song Bird all but ran back to see them. 5 Star and I walked back and checked them out. They were cute. Song Bird and the ladies take at least 5 minutes taking pictures. 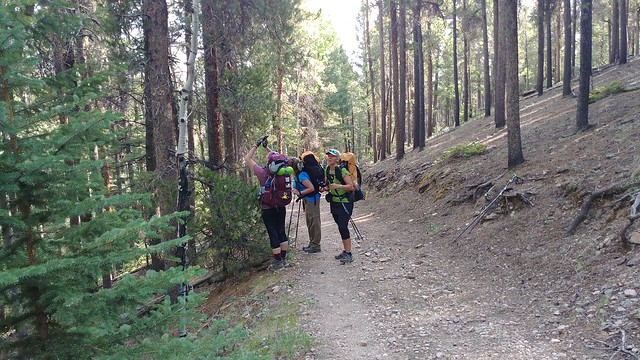 Finally, they got their fix of baby owls and we started hiking again. Uphill. We started at the trail head at around 8,300. It climbed to about 9,000 in just under 2 miles by the time we got to the Lost Creek Wilderness boundary. 5 Star and Song Bird would hike ahead for awhile an be then wait for me to catch up. The altitude was tiring me out quickly and I had to take frequent mini breaks to catch my breath. 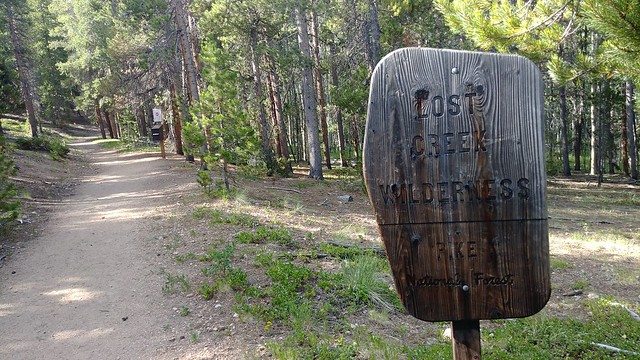 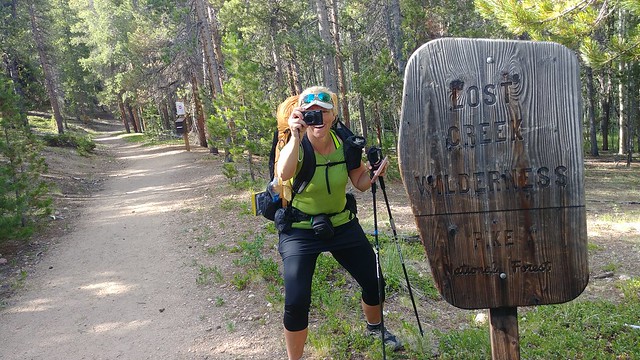 It was mostly uphill but a few parts had short flat section. One was particularly beautiful with Aspen trees growing all along the side of the trail. The trail leveled out to 9300 for about a mile. Just before it shot up again was a creek. We took an hour and a half break to relax and get ready for the last climb to 10,600. 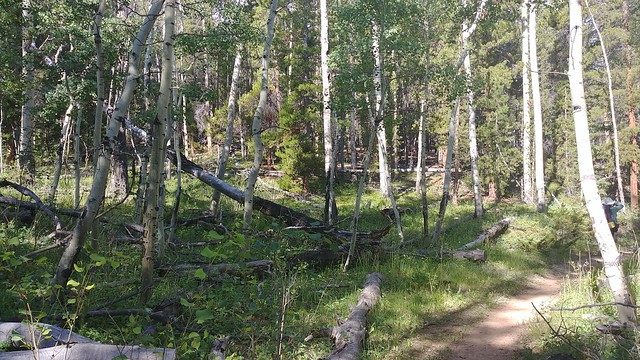 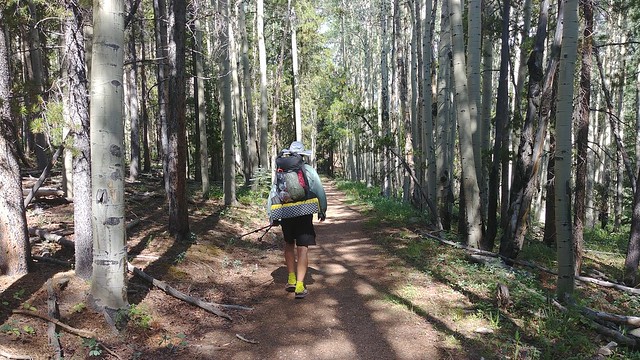 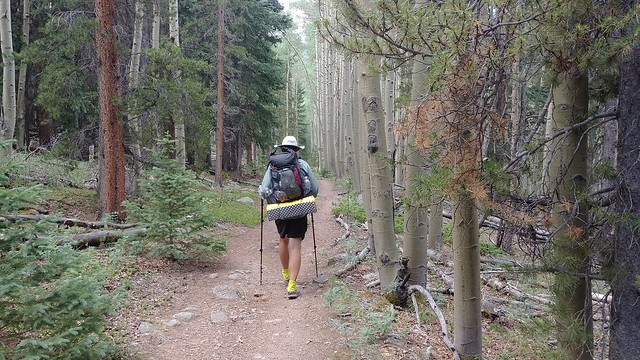 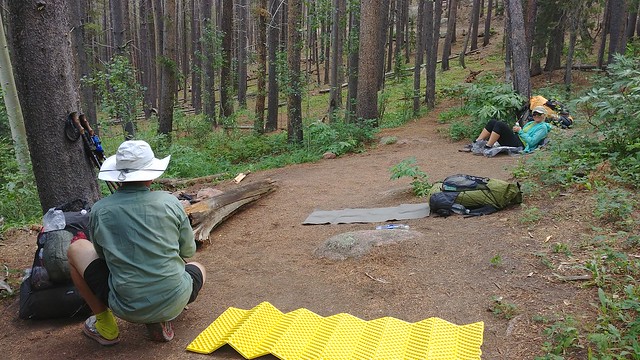 After the break we started the climb. It was miserable. 1300 feet in 2 miles. About half way up I was beat. 5 Star and Song Bird took off and I’d meet them at the top. I slowly stumbled up,the never ending mountain. I passed by a guy taking a break with his dog named Chigger. 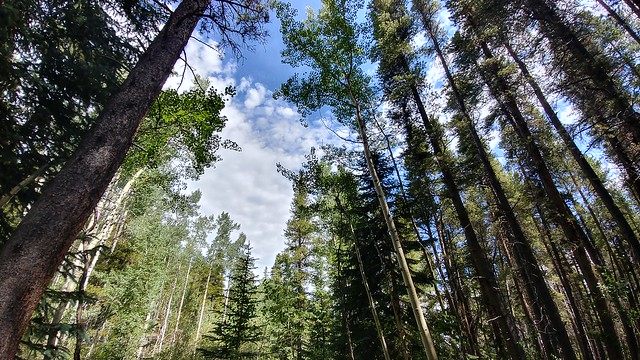 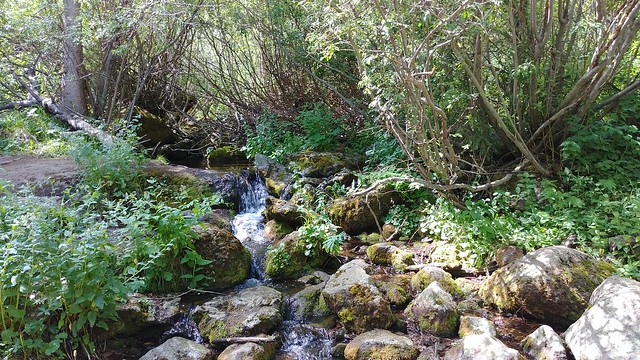 A few minutes later the 2 young guys with large packs passed me. I was only half a mile from the top but every step up was hard. I constantly had to sit for a minute. Finally I reach the top and there is a gaggle of people. I walk over to 5 Star and Song Bird and they tell me I was only a couple minutes behind them. I think they are liars. They tell me there was even more people just a minute ago. The two young guys went through, they said they named each other Ant and Croaking Frog. 5 Star said he talked to a couple others that knew the German and said he got off at the trail head to go into town.

We talk to a couple ladies with a dog and this other hiker that is carrying a gun on his belt. Really? So unnecessary out here. It makes you stand out and in my opinion gives off a paranoid vibe. Having a gun and being paranoid just seems like a recipe for disaster.

It is a couple miles down hill to a creek and the start of a very long meadow. I take the lead and we go down at a quick pace. 40 minutes later we get to the meadow and it is full of people. We pick a spot a bit back from everyone. The only shade is up in the trees but it is cloudy so it’s not too warm. I lay against my pack deciding if I want take care of business now or later. I decide on now and head up into the trees. I dig my hole and unleash the vile creature that tormented me yesterday. I felt way better.

I lay back relaxing when I start feeling some rain drops. 5 Star and Song Bird pull out there umbrellas since its starting to pick up. I pull out mine and say “it’s going to stop the minute I open this.” Sure enough, within 30 seconds it is the occasional drop. 30 minutes go by and the clouds dissipate and it gets super hot. We pull out our umbrellas and lay under them.

Gun man and they guy who I passed with the dog show up and sit by each other. Within a few minutes one of them pulls out a pipe and they start smoking. Guns and weed. Perfect. Tami mentions how he creeps her out. All sorts of red flags she notices.

By 230 we get up and start heading up the meadow. The meadow is 6 miles long with a 600 foot gain to 10,900 feet. 100 feet a mile is barely noticeable. After about 5 miles I’m starting to get tired. Song Bird and I hang back and sit on a log and take a breather. 5 Star doesn’t notice for 5 minutes. We see him look back and I wave at him. 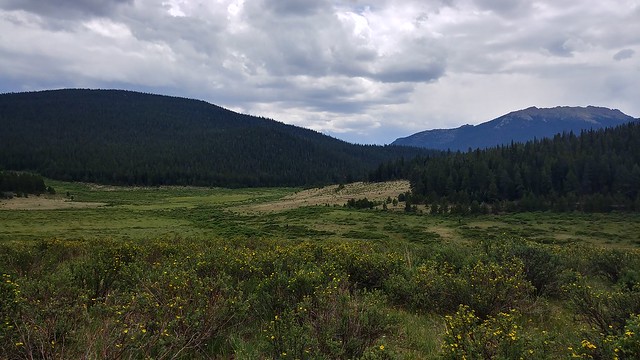 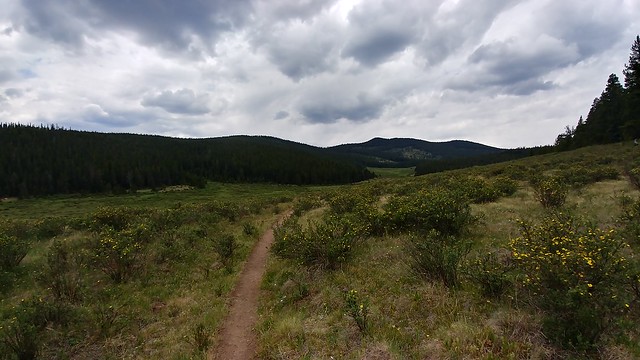 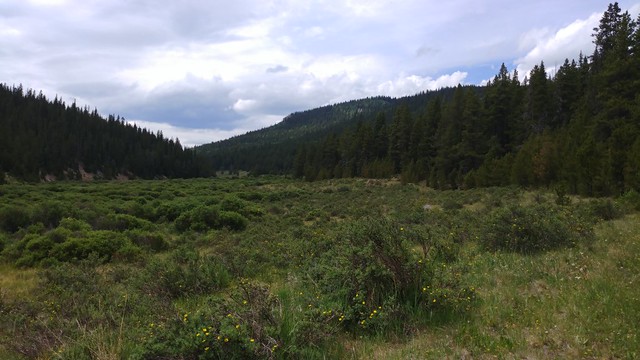 We get up and I continue on. Song Bird falls back a bit. Her feet were getting a bit sore. I walk around a corner of brush when I hear to my right something rushing through the brush and growling. Startled I look over and it’s just 5 Star. 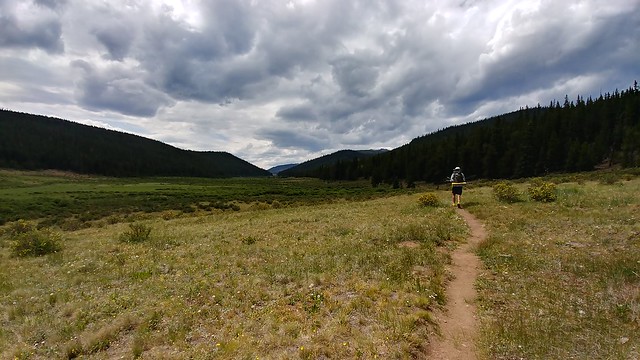 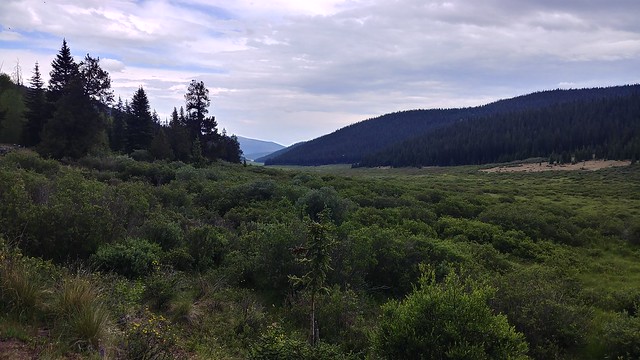 We are about half a mile from water and a mile to the top of the meadow where we plan to camp. The clouds overhead are starting to look dark and threatening. I can see it pouring several miles ahead. We get to the water and its A dribble of nasty water. We fill up a bit just in case. Its 5 miles to the next water. I had a liter and a half so I should be good but the other two had less than half a liter. Just as we were filling up the sky started to break. We quickly pulled out our umbrellas as it started to rain on us.

Then lightening struck. Less than a mile away. It was incredibly loud. We hung out under a tree for a minute before heading out into the cold rain. We hauled ass to where we planned to camp. We saw Ant and Croaking Frog setting up. We picked our spots and then waited under a tree hoping the rain would die down. 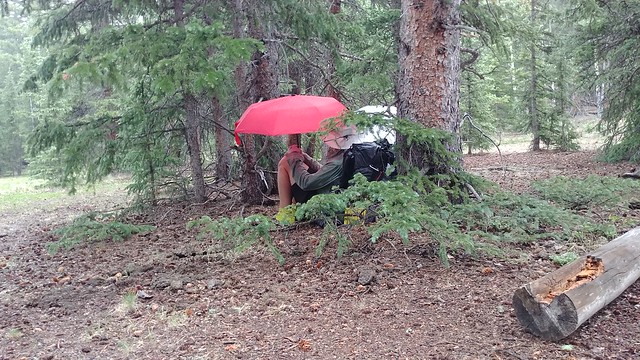 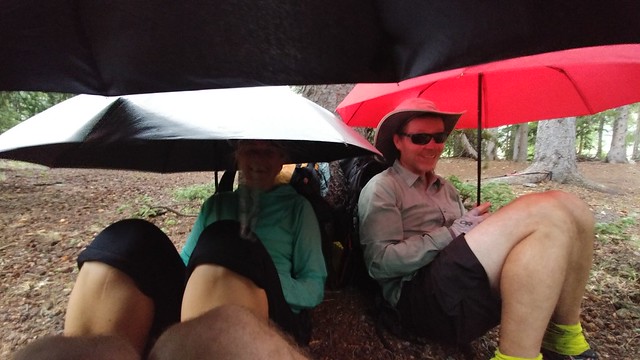 After about 15 minutes it didn’t seem like it would. I was getting cold so I said I was going out there to set up. I quickly set up and jumped in my tent. My pack was soaked on the outside. It was about 530 and so I just laid there relaxing. I dozed off for a couple hours while it rained. At 730 I heard Song Bird shuffling around. I sat up and started writing. She started laughing and said she can see right into my tent. Three its about a 5 inch gap from the ground to where the material comes down. I called her a Peeping Tami.

5 Star woke up and went outside. It seemed to have stopped raining. Song Bird went over and talked to Ant and Croaking Frog. She called 5 Star and I over to check out their food bags. It was so much food. About 10 days worth. They are both new to hiking so we gave them some tips and suggested sending some things home.

The guy with the gun was nearby and came over. He mentioned how he ran into some cows right on the trail. He said he had to pull his gun because one was looking at him funny. Gun, weed, and paranoid. You can’t trust cows. They are known for their sudden bursts of rage and attacking people.

Song Bird made some Corn Chowder and we shared it. By the time we finished it was getting late. Tomorrow should be an easier day and we hope to get 20 miles in.