Last night was wet. The inside of my tent was soaked from condensation by the time I woke up. My quilt was damp down at my feet where it touched the tent wall. Looks like we would be having another hiker yard sale. I started eating a pop tart as I got everything packed up. The good news is I didn’t feel the urge to gag while eating it. I finished packing up and we took off while I tried to enjoy my breakfast. We came to a bridge over a creek and got some water. It was is cold. My hand got wet while I held my water bottle in the creek. So cold.  I started to make my way across the wooden bridge and I started to slip. The entire bridge was iced over. Guess we know how cold it got last night.

We had about a 1,300 foot climb over 3.5 miles right at the start. Surprisingly, it wasn’t that bad. The trail was gradual and graded well. As we were making our way up the trail I spotted 4 deer frolicking down a hill off in the distance. 5 Star said to keep an eye out for moose behind the bushes we were walking through. Wouldn’t want an enraged momma moose to charge us. 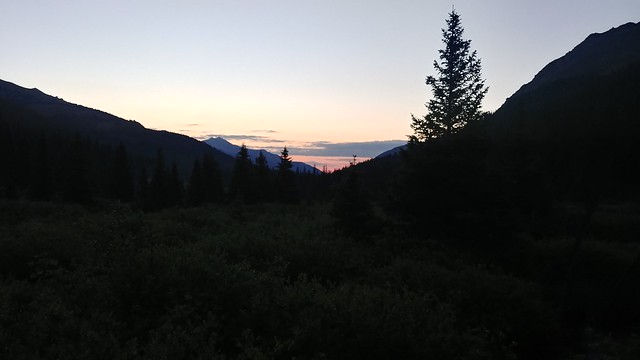 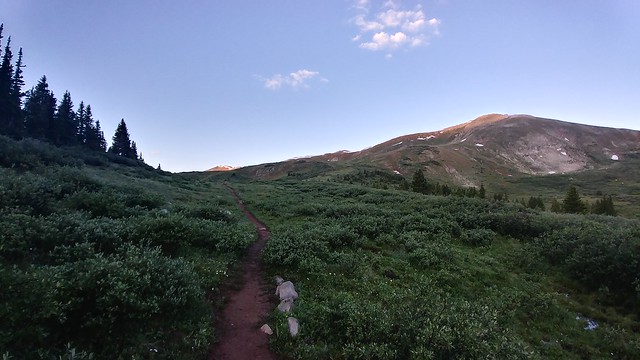 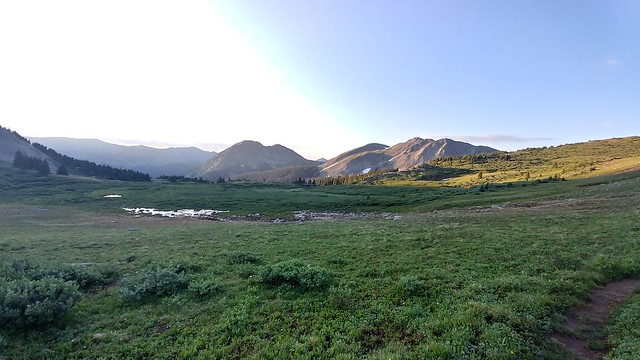 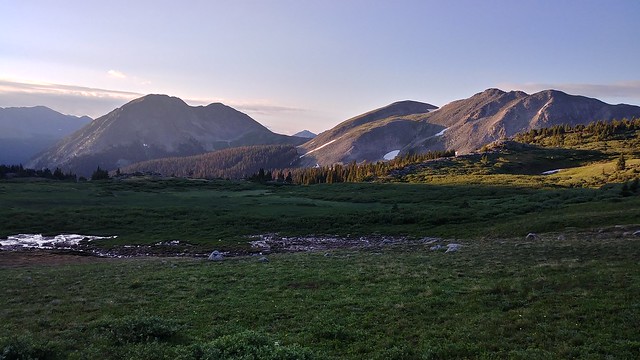 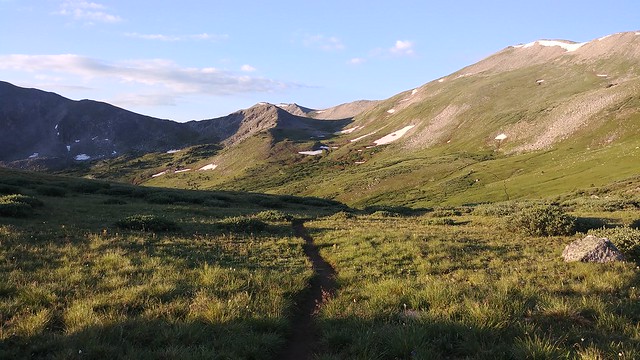 We got up and over the pass pretty easily. The sun was shining and there were only a couple small puffy white clouds in the bright blue sky. A complete change from the overcast and dark sky of yesterday. We started making our way down towards an old railway. The trail follows where the tracks used to be. It ran along a ledge heading down. Before we got to the old railway we had some good old snow patches to cross. 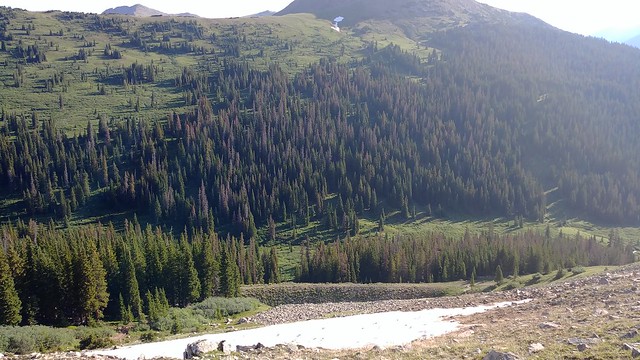 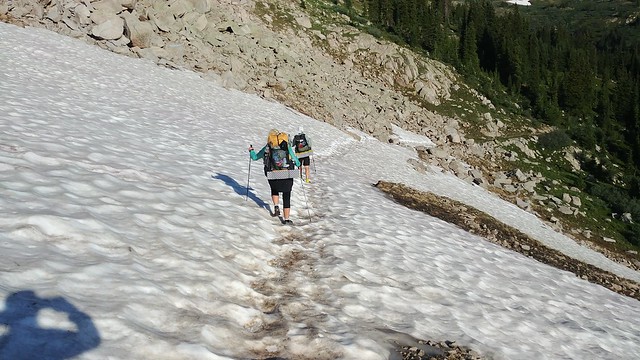 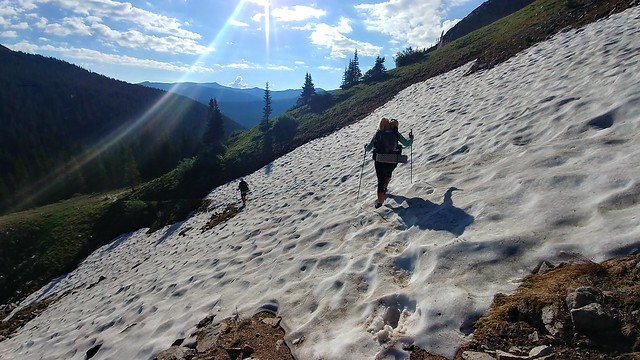 We walked along the wide trail for a bit. We took a break and set out all our stuff to dry in the rocks. I finished off the last of my Cheetos. I was a sad panda. It started to get hot with the sun scrambling my skin’s DNA. My legs were looking quite red. I pulled out my umbrella and hid under it the best I could. We packed up our formerly dry stuff and headed down the trail.

The trail was really wet. It was mostly rocky but the water ran down it and we had to rock hop for almost a mile to keep our feet dry. We got to the end of the railway and there was a sign that said we were at the Sawgrass curve. Apparently, this curve was dangerous and trains would frequently derail.

We kept heading down and passed a lot of day hikers. We got to a dirt road that had several trucks parked. There were large rocks everywhere. Definitely required 4 wheel drive and high clearance to get here. We walked up this road for a couple miles. There were all sorts of people camping, riding ATVs and dirt bikes, and jeeps. It was a crowded place. 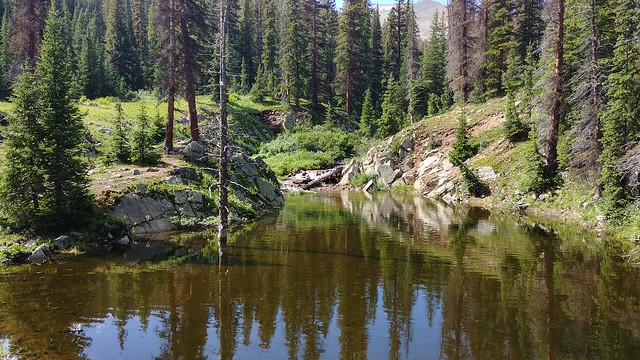 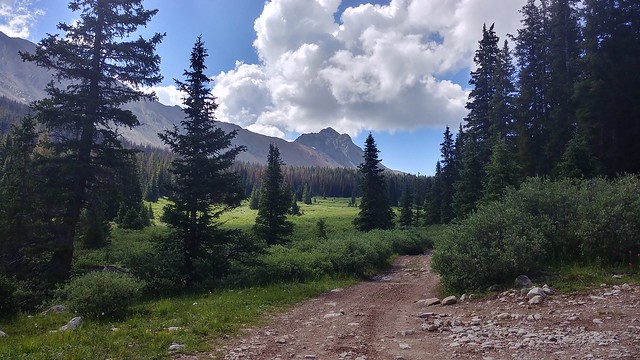 We came across an old out house that was across what may have been a building decades ago. There was a boiler and military trailer of some sort under debris. 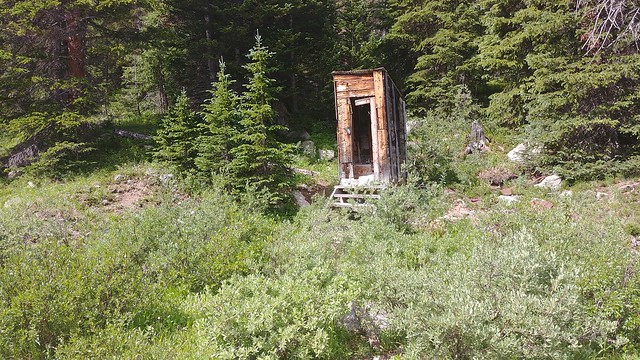 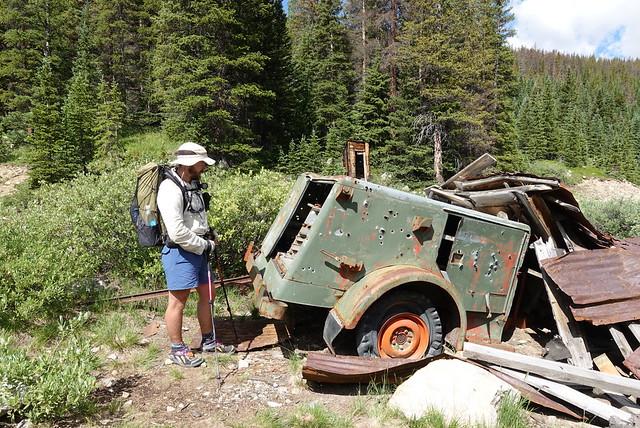 We got to a big turnout area where there were 3 quads sitting there. One had 5 Pepsi bottles. Just sitting there asking to be drunk by thirsty hikers. We decided it would be bad trail karma to take them even if we left $5. We finally got back on the trail and headed towards a lake.

We took our lunch break overlooking the lake. It was completely exposed. Not a sliver of shade. Being the genius that I am I created my own shade. I leaned my pack against a rock and stuck my trekking poles into the ground on either side of my pack. I pulled out my rain jacket and hung it up on the poles. I laid against my pack and used my umbrella to cover my legs. Genius. 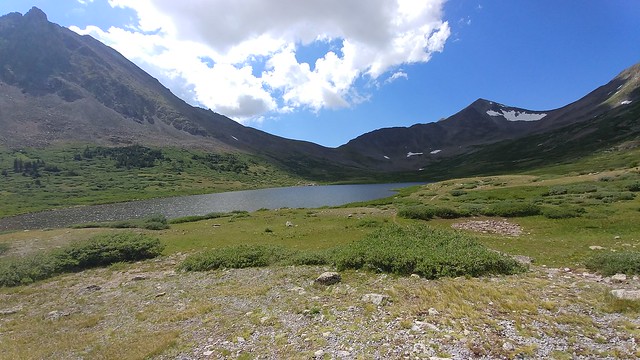 After an hour we made our way past the lake to climb over a pass. The trail leading to the switchbacks up was soaking wet and muddy. It was disgusting. I thought up the slogan for the Colorado Trail while trying my best not to lose a shoe in the mud. “Straight up muddy.” Cause it’s muddy and the trail goes straight up mountains. 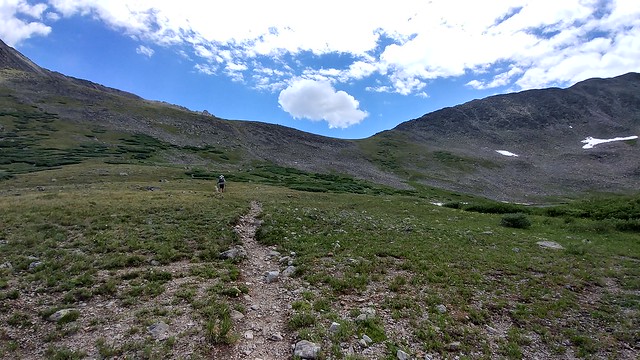 We got up the pass and started to head down. Heading down was just as wet and muddy. We got to a snow patch we had to go down. We decided to just show ski down. Some hikers were amazed at our skills as we dropped 30 feet in 15 seconds. 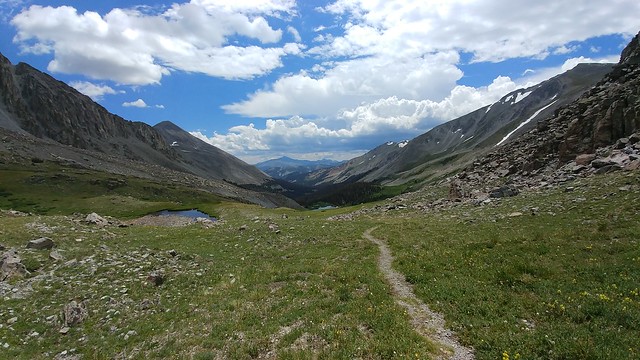 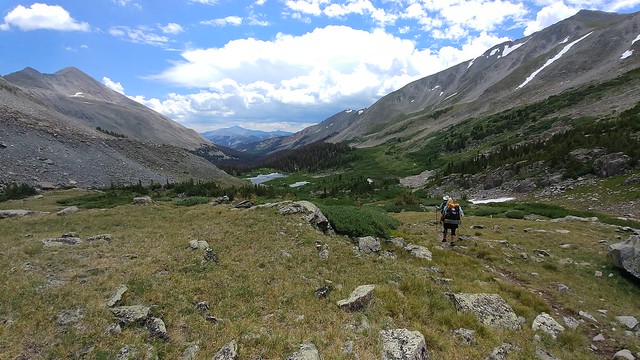 As we were hiking down I started to feel a hotspot on my right foot. This usually means a blister is about to show up. I stopped and told Songbird I was going to switch socks and that I would catch up. I sat down and pulled off my socks. My feet were hot around the area that I could feel hotspots. I poured some water on my foot and cleaned off the dirt. I put on my Injinji toe socks and it didn’t seem to help. I could feel something on the ball of my foot.

I crossed over a big boulder field and the sharp rocks were irritating my foot. 5 Star and Songbird were sitting at the end waiting for me. Songbird asked how my feet were and I said I might be getting a blister. She had me take off my shoe and sock on my right foot and patched me up with her blister prevention process. I put on a thinner sock over my toe socks and it seemed to help. 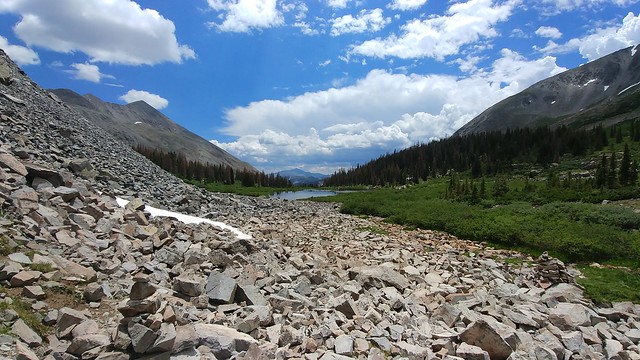 We continued our way down the trail heading to a creek to get water. Along the way, we saw a lonely glove. Still, haven’t seen a shirt or pants. Hopefully, we will. 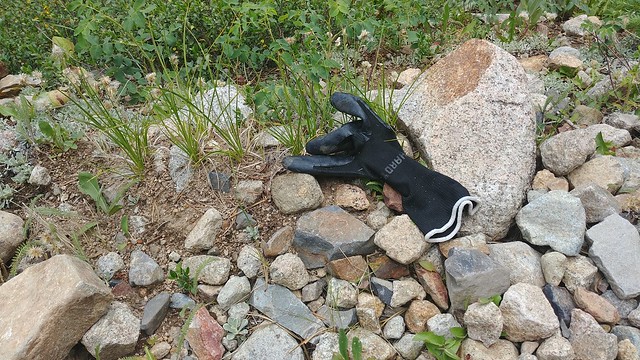 We got to the creek which had what appeared to be a new bridge. It smelled new. When you become a smelly hiker your sense of smell heightens for all smells excluding yourself. You can smell day hikers deodorant and shampoo before you pass them. In this case, I could smell the freshly cut wood. 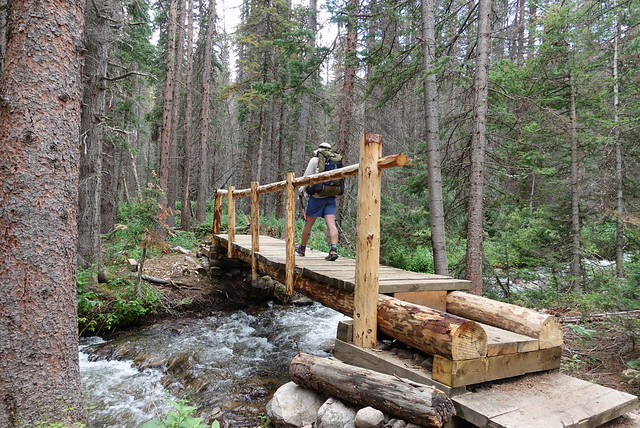 After we crossed the trail went to total shit. It was straight up and rocky. My shoes kept sliding down. It was so steep. We all commented on how gnarly the trail was.

We climbed almost 600 feet before we reached a reservoir. There was an osprey circling over the water. 5 Star and Songbird watched it hoping it would dive into the water. I hid behind a tree for some shade. I was feeling burnt and hot. I crossed a bridge and could see a town way off in the distance. We had service so I talked to my parents for about 30 minutes. 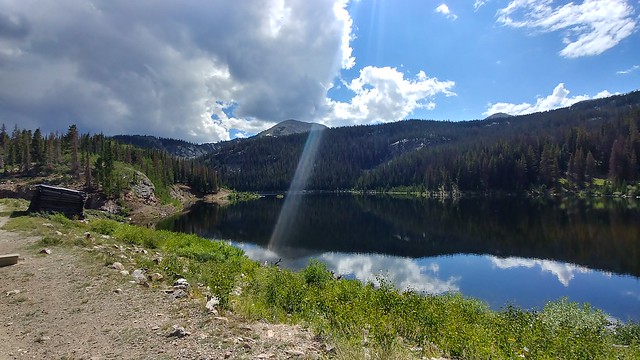 After we made our calls we headed up to this lake that we were hoping to camp at. When we got to the lake it was crowded and we couldn’t find any spots. We decided to go another .7 miles up to a small lake. It was a rough and tiring climb. I was exhausted and hungry. I was hangry. We got to this lake and set up our tents. The sun was still out and it was hot in my tent. I sat in the shade of my tent with my phone in my hand. It was 6 pm and I needed to write but I was tired, hungry, and just not feeling it. 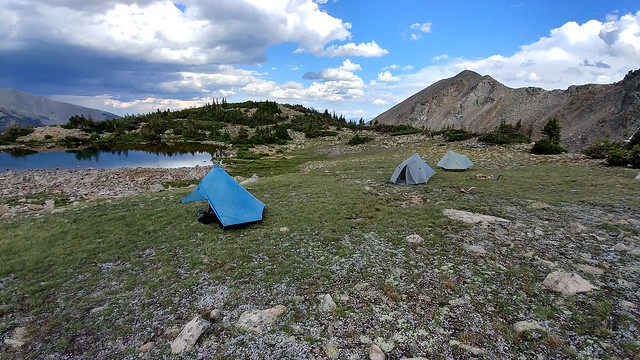 Songbird said she had a bunch of meals left and so we piled into her tent and made a few different freeze dried meals. As we were eating it started to rain. We hung out in her tent for a couple hours waiting for the rain to let up. It was quite cramped. 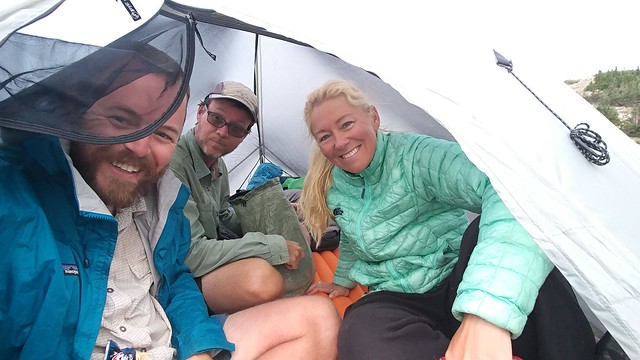 Eventually, the rain let up and I crawled out of her tent so I could stretch and crawl into my tiny tent.

Tomorrow we have about 7 miles to Monarch Crest. We have our resupply sent there. 5 Star says it’s just one building and they might have hot dogs. I hope they do.