I heard Songbird get up. Around 445. I looked over ans didn’t see 5 Star getting up. I waited a bit more before getting up. As I was just about to get out of my tent Songbird went over and woke up 5 Star. We finished packing and took off. The e miles was pretty easy since it was all down hill.

END_OF_DOCUMENT_TOKEN_TO_BE_REPLACED

It rained for a long time. I fell asleep around 8 and woke up several times to it still raining. Some time towards the middle of the night it finally stopped. I heard 5 Star and Songbird rustling around. I checked my phone and it was 4am. What the heck! Way too early.

END_OF_DOCUMENT_TOKEN_TO_BE_REPLACED

I tossed and turned several times but I slept ok. Although, by the time I finished yesterdays post it was 11 pm and the pine cone alarm went off at 5am. Needless to say I was a tired hiker. The good news being we had a pretty easy day ahead of us. When I woke up I had to pee really bad. I didn’t want to jump out of my tent just yet since it was quite cold. I packed up my stuff and slowly transitioned everything outside so I could tear down my tent. I then ran (hobbled) to the nearest pine tree. Sweet steamy relief. I have come close to doing the Ziploc bag method but I’m still worried about holes or spillage. I’ll let you figure out what the method entails.

END_OF_DOCUMENT_TOKEN_TO_BE_REPLACED

I didn’t sleep great last night. I tossed and turned all night. I hoped being tired, not feeling good, and a melatonin would knock me out. Around 5:15 I woke up to a pine cone hitting my tent. I was so tired. On the plus side my stomach didn’t hurt. I sat up and slowly started to pack my stuff away. It was about 52° so it wasn’t too cold.

END_OF_DOCUMENT_TOKEN_TO_BE_REPLACED

Last night was a full moon. It was so bright!  I didn’t sleep very well. I tossed and turned all night. 5:20 am rolls around and I see 5 Star getting up. I start packing up and eat a Belvita biscuit. About 100 feet away is a buck and a small doe. Grazing by the trail. They kept an eye out for us but basically ignored us as they made their way up alongside the trail.

END_OF_DOCUMENT_TOKEN_TO_BE_REPLACED

5:30 rolls around. I wake up to the 5 Star alarm clock.  I sure did miss that. I carefully crawl out of the bunk bed and onto the floor. I eat a bagel, banana, and bacon. A 3 B breakfast. Allen offered to drive us to the trailhead and so we head outside and see one of those short shuttle buses. Awesome!

END_OF_DOCUMENT_TOKEN_TO_BE_REPLACED

Sorry for the lack of pictures. I’m having issues uploading pictures for some reason. I didn’t take many for this day anyways. I’m hoping when I get Wi-Fi in Frisco I will be able to upload.

My flight was at 7am from Phoenix to Denver. Getting up at 5 was a bit hard. Which isn’t a good sign since the 5 Star alarm goes off at 5am. I scrambled and finished packing all my gear. My parents were a bit early and I still had a few things to do before heading out for a month.

END_OF_DOCUMENT_TOKEN_TO_BE_REPLACED

Happy 4th of July! This will be a somewhat long post of what I have been up to since getting off trail and some exciting news.

It’s almost been a year since I got off the Pacific Crest Trail. When April 22nd rolled around this year I couldn’t believe it had been a year since I had started my journey along the PCT.  It felt as if I had only started just the other day and yet it seemed like a lifetime ago.  It took a few months but I started working again for a company that offers Finance and Accounting services to small and medium size companies. I spend most of my time at an awesome custom window company that is very laid back. The F-bombs fly daily. I love it there and the people are fun too. There is also a slide.
END_OF_DOCUMENT_TOKEN_TO_BE_REPLACED

I woke up sick. Sore throat and the beginning of what is my yearly chest cold that I always seem to get. There is no way I would be able to hike if it progressed like it usually does. I made the hard decision to end the hike (again.) I was afraid that I would be 20+ miles from an exit and unable to hike due to having coughing fits.  I checked out how to get home and saw that it was a fairly easy bus ride into Portland where I could catch a flight home. I was torn on whether I was actually upset. I really enjoyed the last couple days hiking with my friends but the thought of heading back out there alone for another 600 miles just didn’t seem fun. I felt as if I got what I needed and wanted out of the hike. I walked 1,700 miles. That in itself is an accomplishment. I may not be the thru-hiker I set out to be but I’m OK with that.

Going into the hike I criticized people that quit, especially those who got so close to the end. Now that I’ve walked 1,700 miles in their shoes I get it. It’s hard. I’m tired. I’ve never been so tired in my life. I’m tired of every aspect of the hike. The thought of having another crushed Pop-Tart, peanut butter, and bar makes me gag a little. With that said I’m going to miss it. I want to come back and finish up the trail in shorter 2-3 week sections. I’d love to get the band back together (5 Star and Tami) and do some hiking.

I texted Mayfly to see if she was still up for breakfast. She was camped out just outside the lodge at that big camp spot where the crazy lady looking for her husband was. I told her she should come take a shower and then we can go stuff our faces. I met her in the lobby and we headed back to the room. She took a shower and then we went to breakfast. It was pretty good. It was a buffet that had all your standard breakfast food. They had a variety of fruits and whip cream for the waffles.  I didn’t stuff my face too much since I wasn’t feeling well and swallowing was getting hard.

We went back up the room and grabbed our stuff and then I checked out. Said goodbye to the sweetest puppy dog in the world who was fast asleep behind the counter. Her paws were twitching. Dreaming away getting chased by bunny rabbits. I asked Mayfly if she wanted to come with me to Portland but she said she had a package she needed to get in Cascade Locks so she is just going to do the hike and then see what she wants to do. I said goodbye to her and then headed over to where the bus would pick me up to take me to Portland.

The bus showed up 15 minutes later and an hour and half and one bus change later I was on the outskirts of Portland getting on the lightrail to take me to the airport. Since I bought my ticket at the last minute through South West I wasn’t able to get a boarding number until I went up to the gate. They gave me my boarding pass and I was C24. Great, I’m going to be dead last on the plane. The plane starts boarding and luckily I wasn’t last. I was third from last! I walk on to the plane and there is an aisle seat in the first row! What?! That’s the best seat on the plane! I asked the older lady with her grandson if it was open and she said it was. I sat down and was pretty excited to have the seat. Shortly after take off I fell asleep for an hour. I woke up and was a bit surprised I had actually fallen asleep for so long. I never sleep on a plane.

The plane landed, I picked up my pack from baggage claim, and then my mom picked me up. We had dinner and then she dropped me off at my house. I was happy to be home and to be done. Since being home I haven’t done much. I started looking for a job and have a couple opportunities lined up. I also did some work on my 1967 Mustang. I enjoyed having a small project to occupy my time. One realization I had on the hike was that I want another project vehicle. I spent a lot of time thinking about what cars I would like.

I had dinner with Jeremy and got to see my beer with the label on it! So cool! He is also making an IPA that he is going to name Mangus Fail Ale. 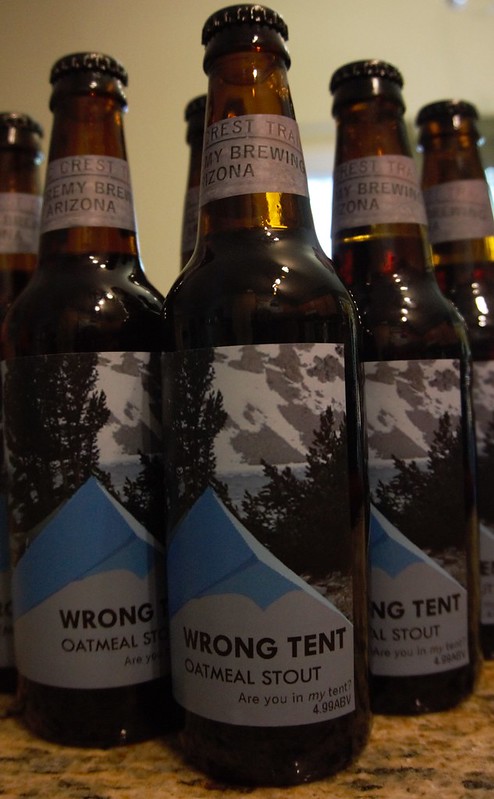 I’m sure this post comes as a disappointment to some of you. I never expected that I would get so many people reading this blog and for all the wonderful comments. I would have loved to been able to post an entry of me at the Canadian border but it just wasn’t in the cards for me. I probably could have kept on going and just dealt with it but I didn’t want to risk it. My hiking career isn’t over and when I do make it back to the trail for the sections I missed I definitely will post here.  I’ve received  a lot of praise about my writing, which I did not expect. I’d like to continue it somehow and so I’ve been kicking around ideas of what to do. It may be hiking related or it may be something completely different.